Afterimage of ship in Sentinel-1

I’m working at ship surveillance and have a question about afterimage occurs in VH polarization.
(Yellow rectangle in the attached image)

I recognized that it does not show or relatively weak at VV pol.

At the first time, I thought it was ambiguity however the shape of afterimage is not similar to the ship. Also, these are close (almost connected) to the original signal.

What makes these phenomena and how can I call it? 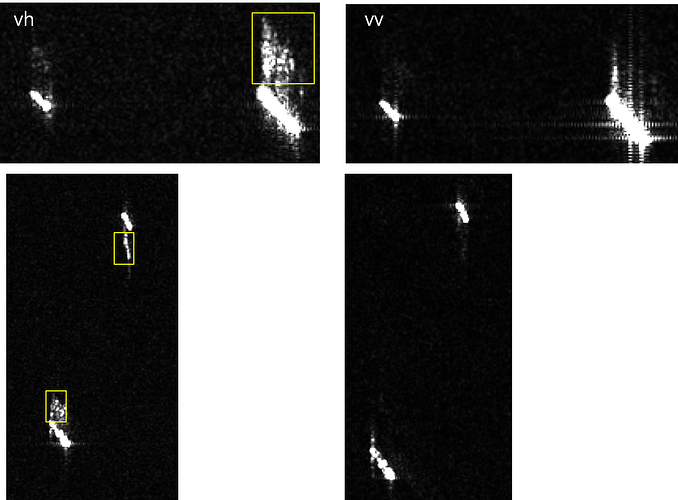 I recognized that it does not show or relatively weak at VV pol.

VH signal is generally lower. Could it just be a matter of contrast?
Is it visible if you select the same color range for both images in the “color manipulation tab”?

I have included below a version of your image where the contact been increased to show more clearly the background. I can confirm the features near the ships are not azimuth ambiguities (too close). I suspect they are part of the ship’s wake. For moving ships, the ship itself will be displaced in azimuth due to its Doppler relative to the sea surface. The seperation between a wake and the ship depends on the ship’s velocity and direction. In your images there are examples of displacement above and below a ship - this occurs if the ships are travelling in opposite directions. 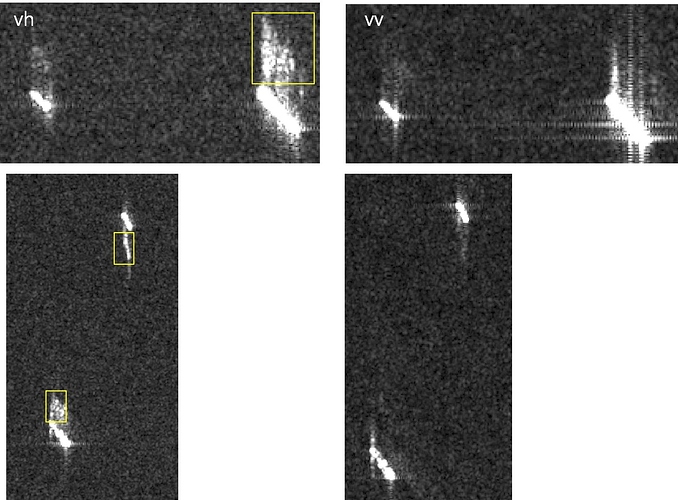 As your suggestion, I made following image. 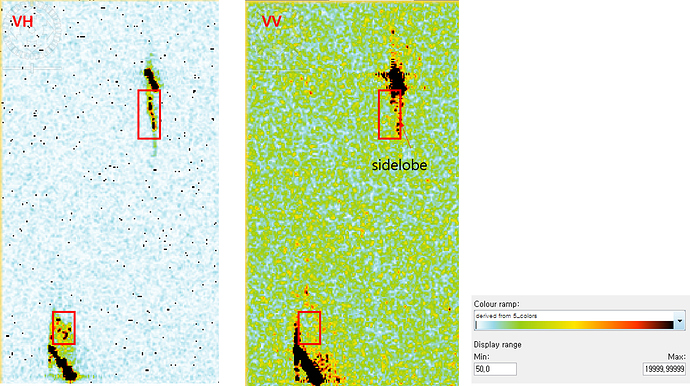 Are these ships far from land so azimuth ambiguities can definitely be ruled out?

Peter, thank you for clear explanation! I understood

Are these ships far from land so azimuth ambiguities can definitely be ruled out?

Yes, these ships are far enough from land, and actually I didn’t process ambiguity removal technique because I’m mainly working with grd product

Hi Jeongju, Could you please reply with the name of the product showing these ships? I would like to take examine this image. Thanks.

Hi Jeongju, Could you please reply with the name of the product showing these ships? I would like to take examine this image. Thanks. 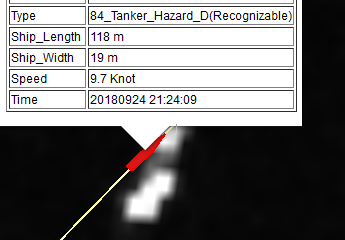 Actually, I have AIS data near the area, and maybe above picture tells what you explained.
I found that this phenomena usually occured moving ship which velocity is about/more than 10knot /
while anchored ship (about X: 14968 Y: 11194) didn’t.

This bright spot on the side of the vessel is most likely related to its turbulent wake near the hull.
The amount of the azimuth shift between this feature and the vessel can be interpreted as a radial speed using the proper formula. This speed can then be converted into speed over ground by compensating the course over ground (using the orientation of this spot) and the incidence angle.
The resulting speed is similar to the speed over ground provided by the AIS. 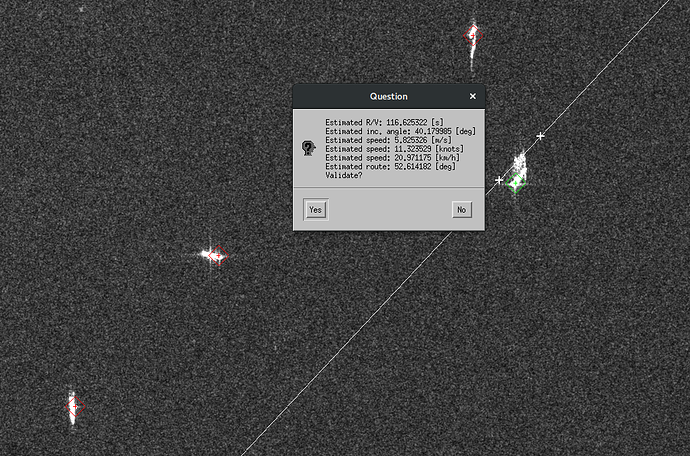 Thank you for detailed analysis! I appriciated