I’m trying to look at ground deformation before volcanic eruptions for a uni project. I’ve created an interferogram, exported to snaphu, imported back to snap, done phase to height and terrain correction. My question is… now what? How do I actually tell what deformation has occurred? Is it a case of just observation of the coherence image or can I somehow retrieve some actual numbers/statistical evidence? 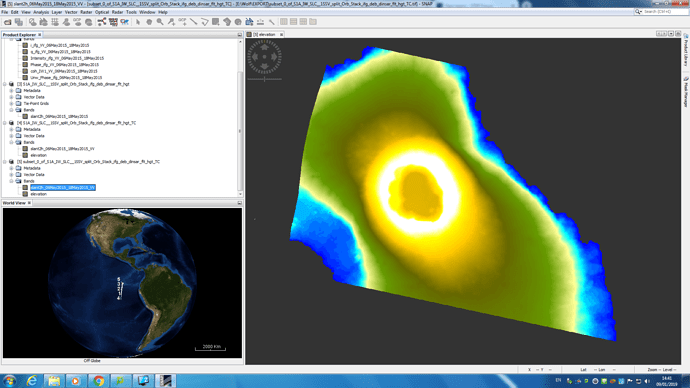 If anyone could direct me to a good tutorial or other means of figuring this out, that would be great!

Hope this makes sense. Any help is welcomed!

you can either derive topographic features with the proposed worflow or calculate subsidence/deformation (=DInSAR). For the latter, you have to include topographic phase removal in the interferogram generation step and use “phase to displacement” instead of “phase to elevation”

Great, thanks! Pretty sure I did do topographic phase removal so I’ll try that. How would I do the first thing you mentioned?

If you applied topographic phase removal, your interferogram no longer contains surface heights, just the height difference between both images. So you take your unwrapped interferogram and perform “phase to displacement” instead and (theoretically) get the surface changes along the line of sight.

If you want to calculate absolute heights, don’t remove topographic phase, unwrap your interferogram and apply “phase to elevation”.

Thanks so much, that’s great!