I can't see the VV (sentinel-1) amplitude in SNAP 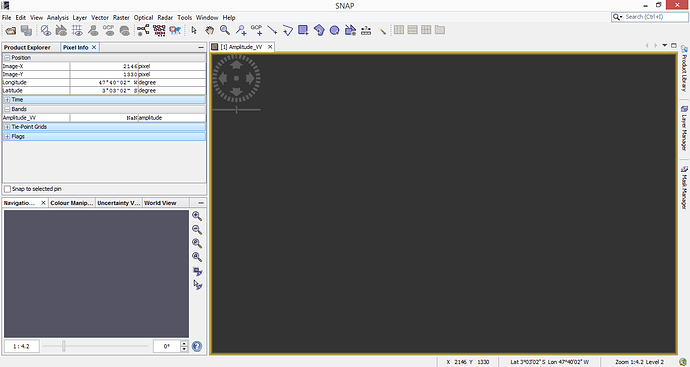 to re-load the image you can try the following options:

Thanks for answering! However the problem still persists

are you sure that the product was downloaded correctly? An empty histogram (as displayed in the color manipulation tab) indicates that there is no data.

Did you apply any pre-processing to the image?

I only applied one subset.
I also find it super weird. I lowered it correctly. Included I was able to successfully process the VH amplitude. I imported the original images in ENVI and both amplitudes (VV and VH) opened normally.
The raster exists … however I think SNAP doesn’t recognize the VV amplitude

I’ve tried with other scenes from other dates and already uninstalled the software several times and the problem is the same = VH amplitude I can process normally but VV doesn’t : /

is the VV band correctly displayed in SNAP before the subset?

No, because the problem of memory space.
However after applying the subset the VH amplitude appears but VV does not. Sometimes I think my problem with the VV image is this computer memory issue.

when nothing appears sometimes this error message comes 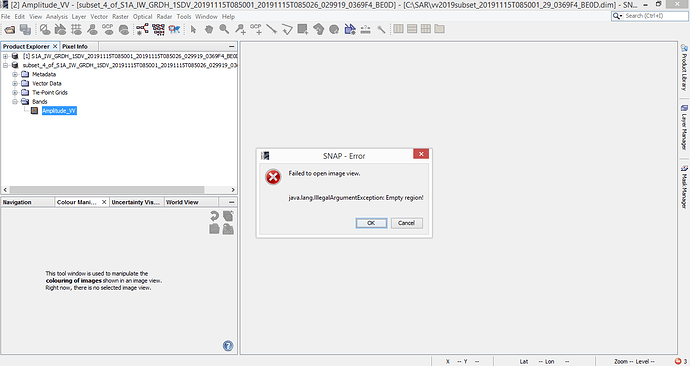 please insert the product name of the S1 image so I can download it and test.

I still believe that the subse is the reason. Can you please give a screenshot how exactly you created it?

for the subset I initially enter the geographic coordinates of my study area and then leave only the amplitude I need. After that the “empty” VV raster is created. 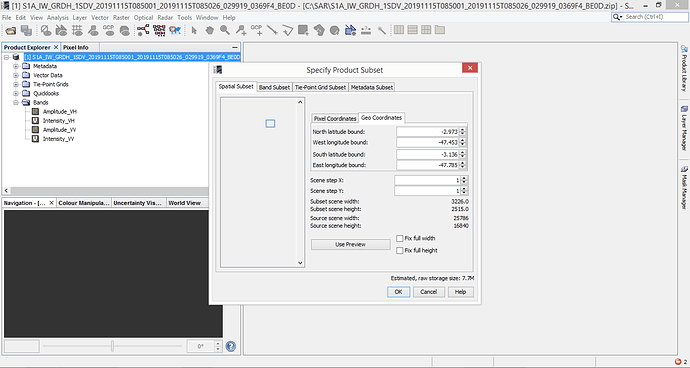 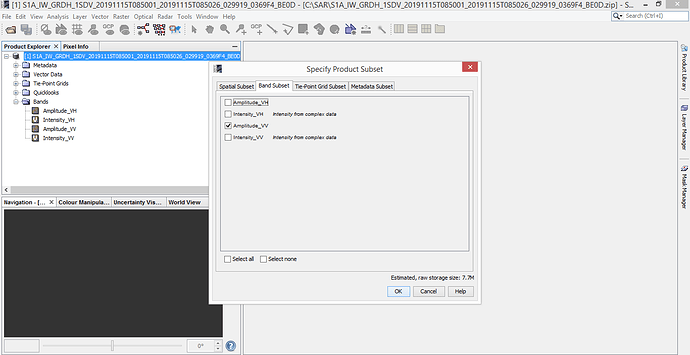 I see that you open the image as a zip file. Have you tried if the display and subset works better if you extract the data first?

I downloaded and tested the image. I was able to display both polarizations correctly.

Also, the creation of a subset of Amplitude VV brings no error.

So at least the data hosted on the server is correct. The size of the downloaded zip file is 0.98 GB - just for you to check.

Thanks for testing! : D
I think I discovered the problem, really as you imagined, was at the subset stage. I performed the subset on the VV image by the cursor and not by the coordinates so the resulting subset was generated correctly.
I believe SNAP was not recognizing the way I was entering the coordinates. I can not explain what happened but when I perform the image clipping by the cursor worked.
Thank you for your help!

I believe SNAP was not recognizing the way I was entering the coordinates. I can not explain what happened but when I perform the image clipping by the cursor worked.
Thank you for your help!