I’m trying to look at temporal S1 signatures in SNAP.

After using Stack Split, the metadata seems to get messed up. Inside the time analysis tool, all images seem to have the same acquisition time which obviously makes the tool fail. 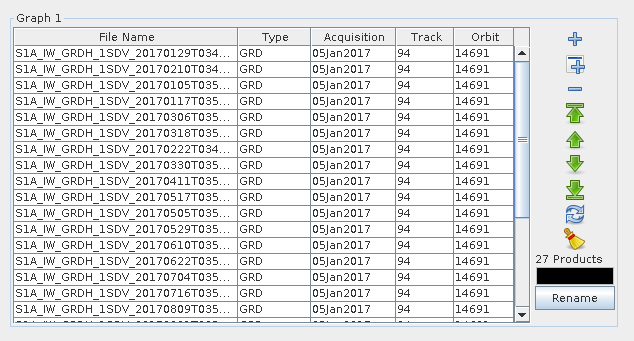 I have seen something similar with an earlier version, but I didn’t write my processing steps down and could not replicate the problem. Could you check whether 3 images is enough for the bug to manifest and whether it also happens with full GRDs?

I can confirm even 3 images generate the bug. Unfortunately I couldn’t test the full images - co-registration works, but Stack Split throws a data buffer error.

I have the same problem.

I think it’s generally due to the fact that Stack Split somehow copies the metadata of the master image to all slave images accompanied with the loss of metadata like processing graph etc.

When using Band Select you face the same problem with the time analysis tool as the master metadata are used for the Abstracted Metadata but at least the slaves’ metadata as well as the processing graph are maintained.

For my purpose I would need some kind of dynamical Band Select so I can keep the metadata (preferably the original and not from the master image) for an unknown number of images in my stack.

Are there any suggestions for that? Maybe with gpt?

@Val maybe you could somehow use “Replace Metadata” for your problem? I did not try it though, because I need to keep the processing graph as well.

Were you able to resolve this somehow?

This sounds like a bug, in order to solve it we need an exact description of the steps required to replicate it. @lveci

After using Stack Split, the metadata seems to get messed up. Inside the time analysis tool, all images seem to have the same acquisition time which obviously makes the tool fail.

@mengdahl
The same problem happens with full GRD scenes.
To replicate the problem, you don’t even need to apply the speckle filter part. Just do coregistration with three scenes and stack split them right away. Using the graph builder this would be Read -> Create Stack -> Cross-Correlation -> Warp -> Write to build the coregistrated stack and than Stack Split.