For topographic removal, I check the own option in the Interferogram generation tool of Snap. Instead, I still get a residual phase highly correlated with the quota of mountainous areas (see the figure below with wrapped phase which seems a classified DEM).
My doubt is if there is: there is any other method or tool that can be applied to more efficiently remove the topographic part of the interferometric phase?
Any of you has applied any statistic method, for example, exporting the displacement map to a GIS, to correlate and remove the residual displacement due to topography from the total displacement? So we can keep only the displacement due to the event of interest (landslide, earthquake…) 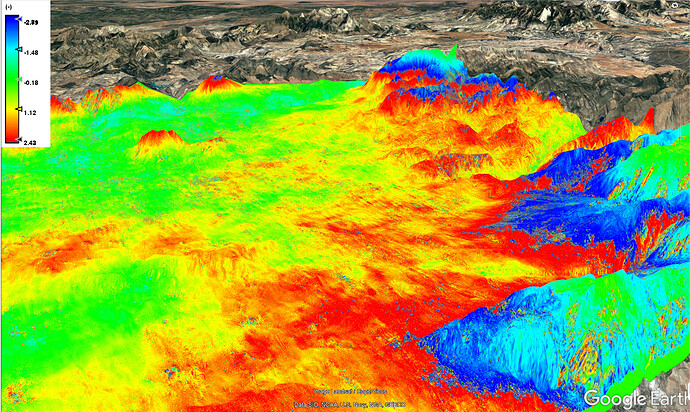 I followed the tutorial: Sentinel-1 TOPSAR Interferometry, using the DEM SRTM 1Sec HGT (Auto download) option.
I thought also in using a high-resolution DEM from LiDAR database at 1 m resolution. But I have to know if I can subset the images before performing the to previous products before run Interferogram generation (i.e.: before split, orbit, or back geocoding). Because I think that this can save time at the same time that getting accurate results.
What do you think?
I generated topo phase (figure 1) and elevation (figure 2) products:
Figure 1

the topographic phase looks alright, at least it was downloaded and integrated correctly.

Unfortunately, it is not possoble to create subsets before debursting Sentinel-1 IW data, which in turn is only possible after interferogram formation. But when you subset your LIDAR DEM to the extent of the selected bursts, SNAP it should not take too much time. You might even consider resampling the LIDAR DEM to 5m, for example, which considerably lowers the data volume and still exceeds the quality of SRTM by a multitude.

Thank you Abraun,
I agree, also because maybe using a DEM with higher resolution than the multilook-images is not much more adventageous for the processing. Anyway, I figure that Snap tools will take a mean value from a matrix of DEM pixels to match the SAR products pixel dimension. But taking mean values from a LiDAR dem, even if the multilook images are formed by 29 m square pixels, this may be more accurate than taking values from SRTM DEMs.
I try in this way.

Hello Abraun and everyone,

I finally used a DSM with 5 m resampled to 10 m with horizontal datum WGS84 in degrees, and vertical datum at the m.s.l (specifically, datum EPSG: 5782).
For the interferogram, I’m using two images from the same month (short temporal baseline), covering an earthquake of magnitude 4.
One more realistic improvement that I’ve seen is that no positive values are detected, as expected in a basin which is settling with the displacement of normal fault of its bedrock.
However, visually the results are similar to those of the previous trial (SRTM DEM), and relative displacements (spacially, from one place to another) are very similar for both trials.
And the scale is rather translated to only negative displacements, that is:

I’ll try to use the same vertical datum that SRTM in a third trial, but, anyway, do you think that the simple fact of changing the vertical datum (theoretically) will affect the phase difference and thus, rescaling the obtained ground displacements?

I have my doubts that the ground sank up to 5 cm…maybe, 1 cm.

I can’t imagine that the vertical datum makes a difference.

Ok, thank you.
Moreover, I don’t find the transformation files or geoide grids to convert from the local datum to the global datum by now.