I have a question concerning multilooking of interferograms . Before, the minimum value is as it should be (-pi) but after it becomes larger ( e.g. ~ -2.6). This doesn’t seem normal!

Statistics before and after multilooking: 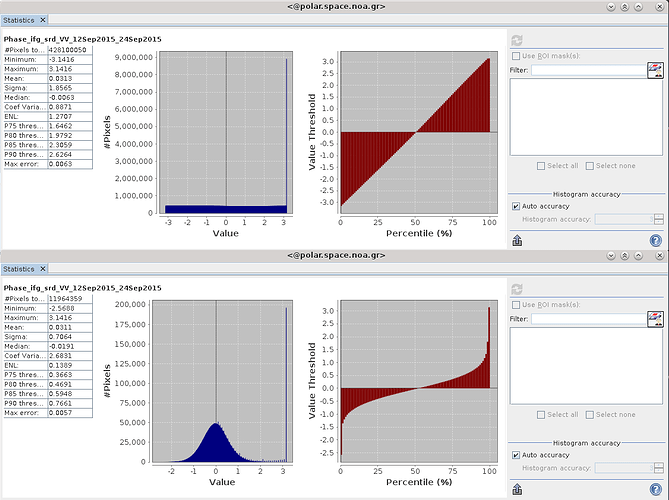 at all the other software the multilooking on e.g. ASAR was performed in the SLC. With S1 should be where, before the interferogram of each burst (to the master and slave separately - or even before) or after the TOPSAR merge?

I tried this way but TopoPhase Removal complained that it needs a single look complex as input. I multilooked after TopoPhaseRemoval using the two (i and q) bands in one multilook command and then I used band math to calculate the phase. It seems ok now.

If you don’t select any bands in the multilook, it will do the i and q and produce a phase band from those.

thank you, it worked but we also noticed the strange histogram of the products which trigger the http://forum.step.esa.int/t/histogram-changes-during-interferometric-processing-chain.