I tried to coregister two SLC ICEYE images using the graph builder tool but I got the following Error [Nodeid] Cross-Correlation] null.

Using the graph builder (Standard Graphs → Coregistration). I selected the data format “IceyeProduct” but it seems that there is an issue during the Cross-correlation step. It seems that the problem comes from reading the files - Do you an idea about how to solve the issue ? 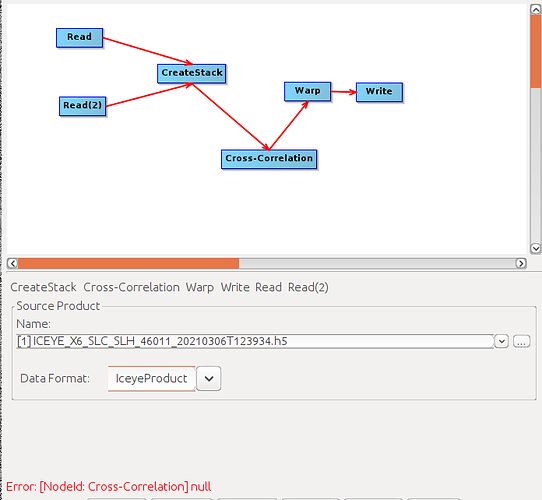 would it be an option to use the coregistration operator instead of stack, cc and warp?

Coregistration operation is totally fine - The issue is the GeFolki coregistration seems not working out of the box using the UI (same using the graph builder tool) I got the following error org.esa.snap.core.gpf.OperatorException: Error on coregistration processing (possibly too large images) : null. I got the same issue with another pair of images.

The structure of the graph builder slightly differs from the menu. Maybe Radar > Geometric? I don’t have the chance to test at the moment, but it should be there.
May I ask why you use the graph builder at all for this task?

Why don’t you then coregister all images at once? The pairwise preparation is only needed for S1 TOPS products.