Hello Sir,
I would like to thank you for all your replies till date, they helped me a lot. Just wanted to ask, why have you suggested to calibrate to beta 0(and not sigma 0) in the algorithms that has terrain flattening.

If i have to perform slice assembly, where should it be applied in your suggested workflow(for GRD).

I would like to thank you for all your replies till date, they helped me a lot. Just wanted to ask, why have you suggested to calibrate to beta 0(and not sigma 0) in the algorithms that has terrain flattening.

The reason is this:
Beta0, also called radar brightness, is the basic calibration of a SAR product. It makes use of an internal calibration constant stored in the metadata. You use it if you don’t have information on the incidence angle (red angle) of your image. The incidence angle is defined as the angle between the surface vertical of the earth (without terrain) and the incoming signal. 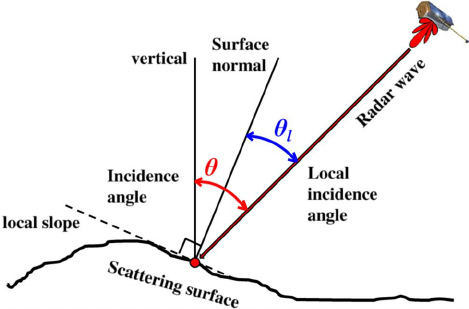 Sigma0, the normalized radar cross-section, is an advanced measure of calibration. It takes into account the calibration constant and the incidence angle (which is mostly also known from the metadata).

* NOTE: Since SNAP 8, conversion to Beta0 prior to Terrain Flattening is no longer required, because it has been integrated into the TF operator. 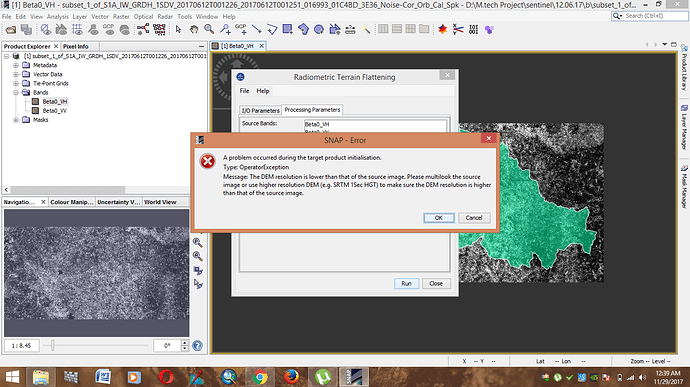 Why am i getting such an error while performing Terrain Flattening.

the reason for this error is written in the message. But you can uncheck the re-grid checkbox.

Hi, I am stuck again in this step do you have any solution for that?? I am trying rectify image this error is coming at the step Radiometric Terrain Flattening. [image]

The SNAP software is exploited using the Java language?

For sentinel-1, the datatype is short complex or float complex?

If you are referring to the i_* and q_* bands of a S1 SLC product, I can say that bands are of data type short.
You can see this by selecting the band and then select Analysis / Information from the menu.

for SLC data I would suggest

Can you pleas tell me about radiometric correction workflow for SLC data? i ve followed your above suggested steps… But after deburst and orbit file correction i could not calibrate to Beta0? exception says calibration should be applied before deburst?

this could be new since SNAP version 6. In that case it is no harm to put the calibration to B= at the very beginning.

Yes , I have tried the same. So first Calibration to beta0 then deburst and orbit file a=… but i could not perform thermal noise removal it says beta0_VV does not contain thermal noise… So now Applying Speckle filtering… it is consuming lot of time to do speckle filter…

Speckle filtering is optional. You can also generate subsets with TOPS Split first.

Thank you ABraun, i will give a try.

Is it fine, if i firstly subset the GRD data(to my AOI) and then apply the above mentioned steps or should i first perform all these steps and then subset it at last.
Thanks

Both should be fine. If you need to have an exact subset based on coordinates, you can apply the orbit file first.

Did you know any scientific papers for those steps at GRD or SLC products?