The coregistration has worked fine so far, but now I get an error message concerning the residual output txt: 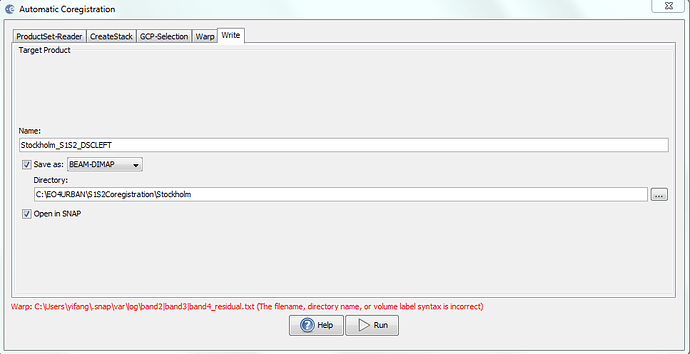 Do you know what the issue could be?
I am still running version 2.0.2, on windows 7.

Looks like you have a ‘|’ in the filename, which is not allowed on Windows.

How does that happen to the band names? What is your input products and band names?

My Input is a tiff (as master), which is a sentinel2 image, and a sentinel 1 image (GRD, orbit files applied and terrain correccted). None of both have a " | " in their original file name. However, once I load the the master image (tiff) I see that it changes the name from “Stockholm_S2” to band2|band3|band4. I guess I will be on the safe side not using a tiff as a master, but a .dim.
Thank you for the help !

here is a screenshot of the image (Stockholm S2) I want to load (right side) and how it is labeled in SNAP once it
is loaded (left side). As you can see, the names have totaly changed. I was loading S2 images over Beijing succesfully before already. So I do not think it is a general problem SNAP has with (geo)tiff. Do you have an idea why that happens ?