Hello, forgive the little English.
I meant in the frame that part which is evident could be snow, or it can be tied to a geophysical phenomenon?
In frame instead I ask you today Annex, shows deformation during the earthquake in central Italy, but such observation in another occassione could also be observed in a survey of the snow effect that moves? thank you so much…[cid:cb83aa03-6385-4e32-9b31-b60beccdd583] 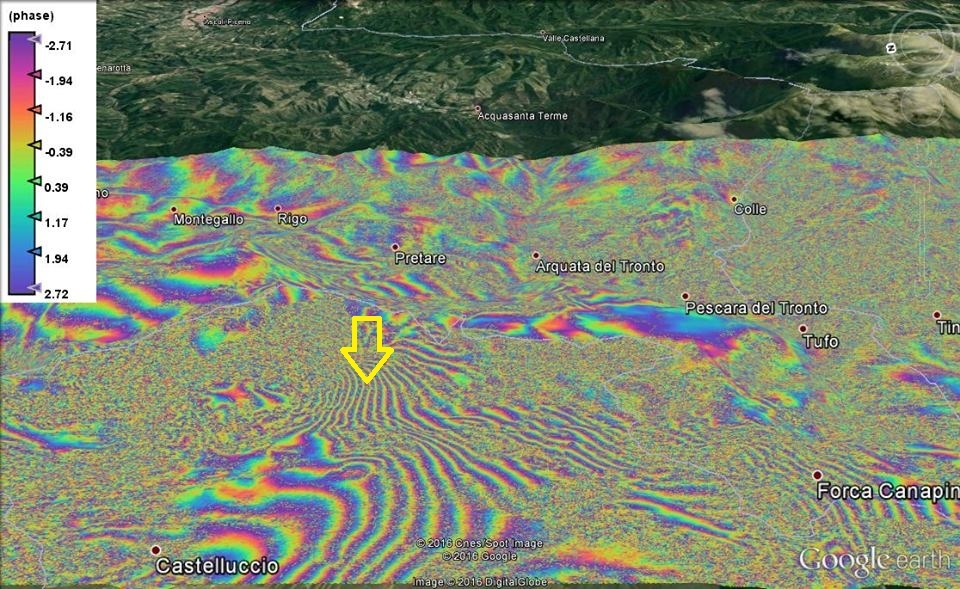 you can’t tell it from the interferogram alone. If you want to interpret the fringes, you need knowledge about the study area.
If you know that there is snow and the temperatures between both images may have caused snow melting, the decorrelation could be explained by snow as well.
If your coherence stays high and the fringes changed, there is a good chance that ground movement has occured.

thank you. Try 'to question two other dates file in the months not covered with snow. Last file which contains a breakdown flanges I have highlighted with a yellow arrow, are the are the Italian center of the earthquake 6.5.

Thanks for your valuable comments and advice. In the following photos I ask you, two time intervals from October 2016 al January 1, 2017 and another one where you do not see any fringes is October 2016 to 19 January 2017, with 10 days of difference. At this time came the snow, possible that the snow has covered the satellite and interrupted the natural geological soil movement? thank you. 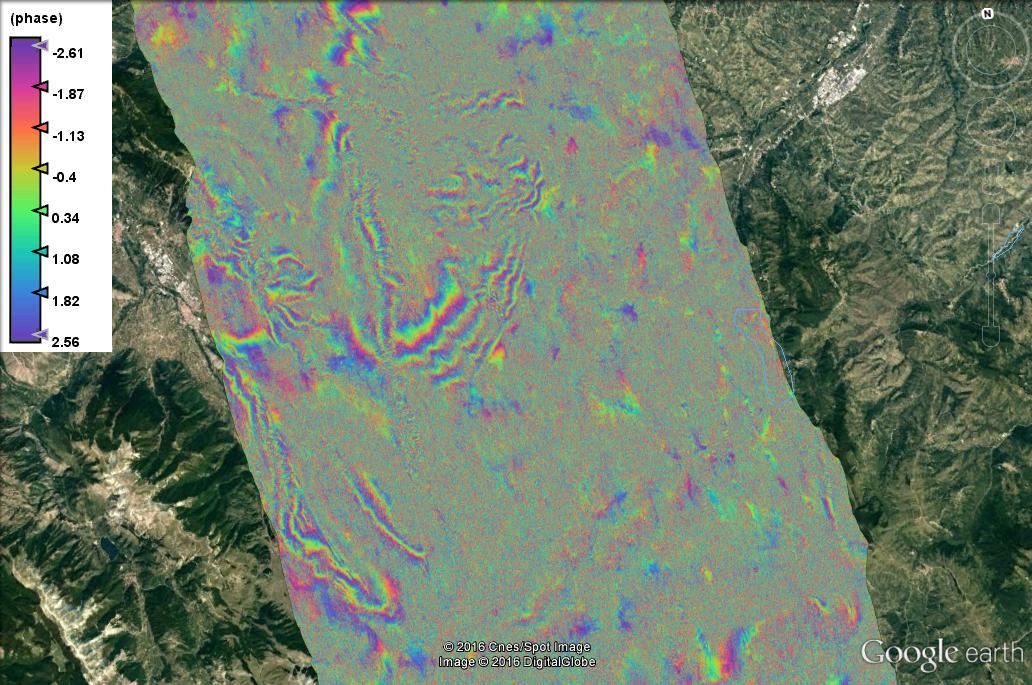 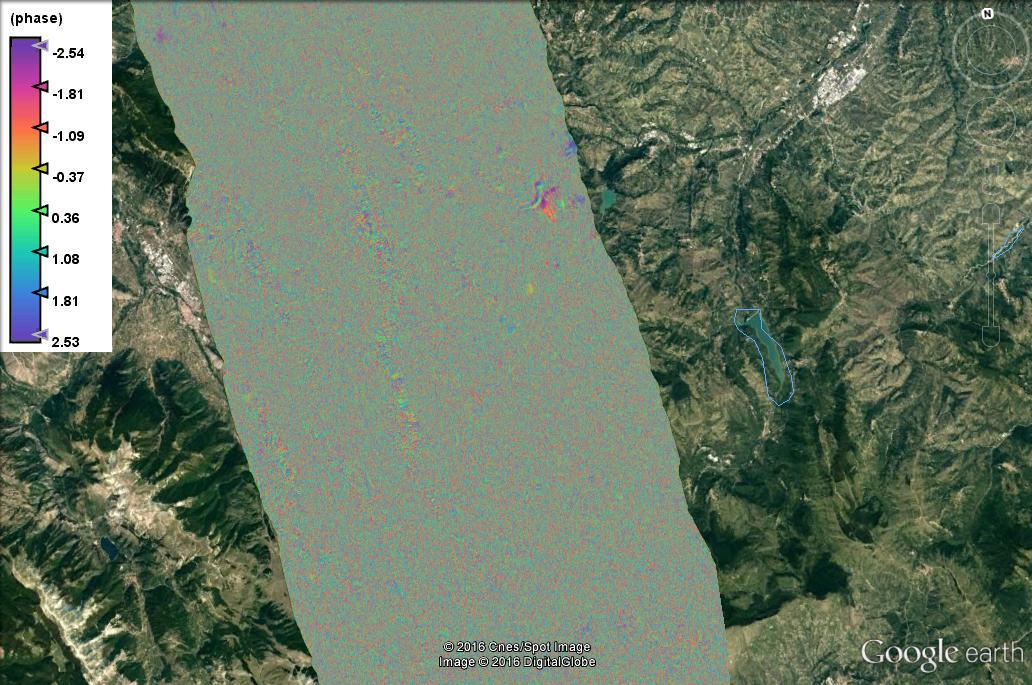 Thanks for your valuable comments and advice. In the following photos I ask you, two time intervals from October 2016 al January 1, 2017 and another one where you do not see any fringes is October 2016 to 19 January 2017, with 10 days of difference. At this time came the snow, possible that the snow has covered the satellite and interrupted the natural geological soil movement? thank you.

if soil movement and snow cover come together, their effects on the phase add up. I think it is quite impossible to discriminate their contribution on the interferogram from the image.

thanks, then with your words, even if you fall a lot more snow would put in evidence the flanges previously observed? Did I understand well ?
What does their effect add up? thank you so much

thanks, then by your words even if she fell so much snow still would have highlighted the flanges observed previously? Right? did I get it right ?

Both together destroy fringes even more. That’s all you could say by comparing the interferograms.

My research question is aimed at researching a subject to major earthquakes territory. given that it is very evidently slowed la.deformazione could be the subject of prior earthquake study

my Italian isn’t very good, please stick to the English language if you want others to help you.

Automatic translations are not a good idea in terms of discussing research aims.

even my English is not good.

excuses friends.
How can I achieve this?
Steps to follow? thank you 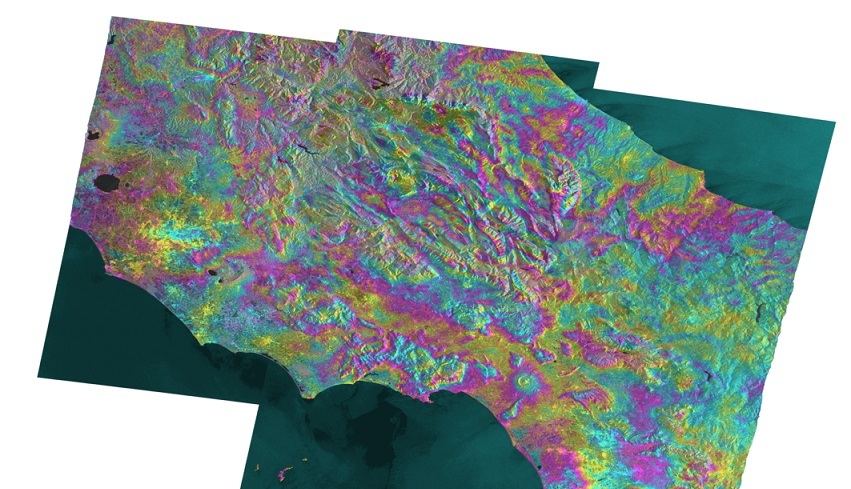 Dear friends
How can I get FTP files Envisat Asar? Thank you

You can to access to information about ENVISAT through the this link https://earth.esa.int/web/guest/eoli