Same result for Ratio VV/VH if using sigma0 or gamma0

Hey Guys,
I am not an expert, but I found a formula on the internet that says that sigma0 and gamma0 are connected by multiplying by a factor depending on the incidence angle. (I will look it up again).

If so and I am interested in the ratio VV/VH could I theoretically use the gamma0 values instead of processing my own sigma0 values? Our approach is based on sigma0 so far, but we got access to gamma0 data that is already processed to the same extent we are interested in, so we would save a lot of time.

Thanks for any help,
Felix

you probably refer to this equations 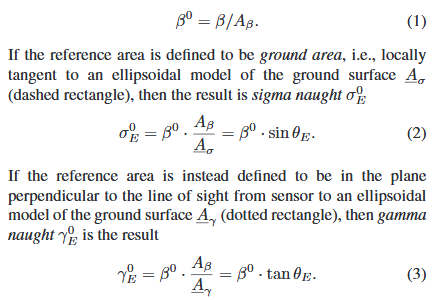 If this is your definition of Sigma0 and Gamma0, the difference between them is really small, especially if you only have little topographic variation in the image.

If the Gamma0 you refer to is the terrain flattened Gamma as produced by SNAP in the Radiometric Terrain Flattening operator (later explained in the paper mentioned above), the difference can be larger at slopes.

I think these are the equations I found, yeah. The data is not terrain-flattened (I am interested in lakes, so it shouldnt be necessary).

Using this equation and transfer it to sigma0 = gamma0 * sin/tan, so basically gamma0 * cos (If i did the math correct).
As I am interested in the ratio between VV and VH, the ratio of the gamma0 should be the same as the ratio of the sigma0 for each polarisation, as it is basically:

Since the cos-values depend on the incidence angle, they should be the same for both polarisations.

Please feel free to correct me if I am wrong, I am not going to use it in the long run, as not all the data has been processed to the gamma0 stage, but I am still interested if my thought make sense.

@eyeinsky you are more experienced here, what would you say?

But using an ellipsoid can add further noise to backscatter estimates of lakes that are at different heights, and not all on the ellipsoid. But Bragg scattering will of course be strong on windy water bodies for HH or VV, and already introduce another strong factor.