I’ve two Sentinel 1 SLC images that I’ve been trying to do an interferogram for. They are almost 30 days apart. I’ve coregistered using the TOPS menu, deburst, taken out the topographic phase, and then filtered. Coherence is high. I run snaphu on the subset (IW3) and I run out of memory. Okay, I go back and tile the data and the unwrapped phase is perfect parallel lines. Alright, I delete a few files and come back and subset–the result is a set of black and white perfect parallel lines. Any suggestions on what to try next?

To be able to form a interferogram, the 2 products must be multiples of the S1-A repeat period apart in time. Thus they need to be 12, 24, 36 etc days apart or 175, 350, 525 orbits apart. You mention 30 days which indicates the two products are not from multiple repeat periods apart even though there will be an overlap on the ground.

Alrighty, rechcecking the orbit data, they are 350 orbits apart and 36 days apart–my initial mistake. I’ve also tried running snaphu a few more times–in all cases where I subset or tile the data, the output is perfect linear bands in the unwrapped phase. I’m working in northern Nevada where there are few structures, but there are roads. Vegetation, if any, is salt brush which takes decades to grow any appreciable amount.

I guess my questions at this stage are:

With TOPSAR data it needs to work burst by burst through the coregistration and interferogram. After deburst you may create a further subset.

Above is my unwrapped image after coregistering, inteferometric processing, debursting, topographic phase removal and sub-setting. Then it was Goldstein filtered.

Here is the associated coherence image

An here is what snaphu spits out

Like I said earlier, pretty much parallel lines. Any and all advice appreciated. While I’ve worked with optical remote sensing on a variety of projects, SAR is new for me. I still admit I’m learning. Thanks, MEH

PS–if the bmp files didn’t come out, contact me at mehall@blm.gov and I’ll send you them off-line.

Hello,
I am studying dam deformation using Sentinel 1 TOPS data, and it is the first time I try (before I was mostly in Earthquakes and volcanoes). I have 50 SLC images, from which I selected the master using the function Stack Overview.
My objective is then to export the data into Stamps and do a time series analysis.
It is true that there are no big movements in that area, but this is an example of interferogram I obtain. Certainly, not a normal interferogram. The fact is that is not about time: even if I choose 2 close acquisitions the result is the same. When downloading the data, I was selecting images with same track and all ascending. Also, in the image there are lakes: shouldn’t the water “disappear”? 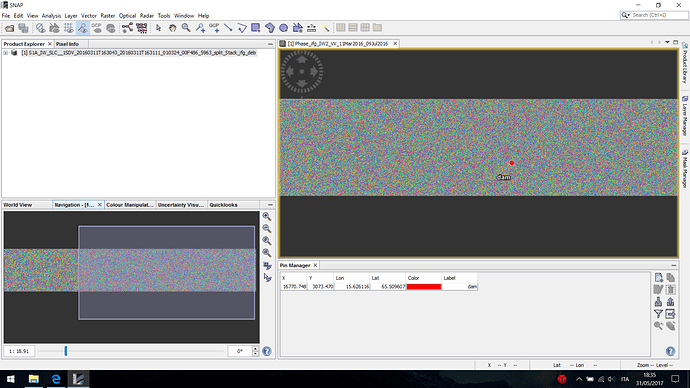 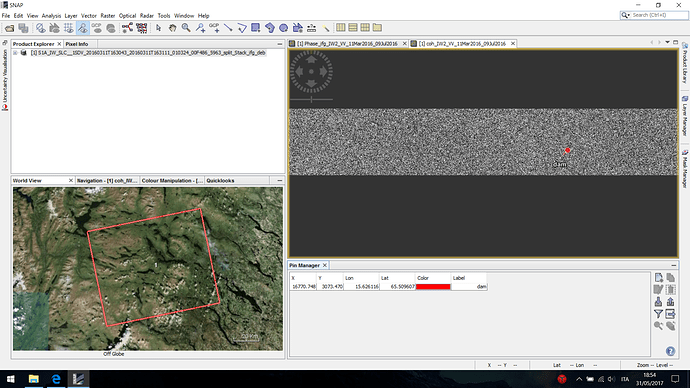 My steps are quite easy ( I followed mostly the steps in the tutorials):
-split the data ( all are IW2)
-apply orbit
-backgeocoding
-interferogram
-debusrt

The area is mostly vegetated it is true, but at least the area of the dam should be a valid “bright” zone, no? , or maybe it is too small for sentinel? or maybe I should wait until the final results in stamps?
Any suggestion /clarification is appreciated. Thank you!!

if you start InSAR stack overview, what are the values of modeled coherence?

Can you show us the coherence image as well? Only areas with coherence > 0.4 can be used for interferometry.

When I do stack overview I have values higher than 0.5. Here in the figure the values I get for each stack in the tool InSAR Stack. 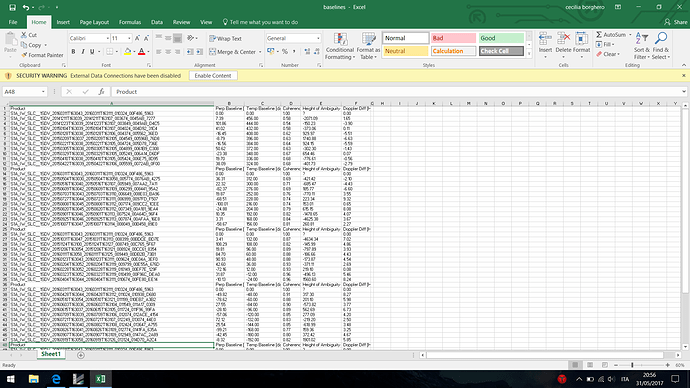 The image of the coherence is in the post above (second image). and yes there are pixels higher than 0.4…but pixels, not entire areas. Even if pick the interferogram of the pair 11March(master) and 4april(slave) -so there should be correlation theoretically- is the same…completely “wrong”.

you can’t retrieve a proper interferogram without high coherence areas.
If there is much vegetation cover on the ground InSAR based on C-band SAR is generally hard.

You can try to partially increase the coregistration result by changing the parameters in the backgeocoding step, but most likely it is the ground cover that prevents signals of both acquisitions being in-phase.

Just run the “TOPSAR Coreg Interferogram” graph as shown below and select “IW1” in TOPSAR-Split, see what you will get

The graph can be found in the GraphBuilder under menu “Graphs => Radar => InSAR Graphs”.