I would like to know whether it is possible to detect large amounts of slime (fish slime) on the surface of the sea with sentinel 1.

Hi,
It is interesting, but I have a question to you, Why do monitor this kind of fish? Why not other types?

It’s not a fish . it’s slime on the surface of the water as shown in picture below. I can monitor the water quality with sentinel 2 but I would like to know whether I can try it out with sentinel 1. 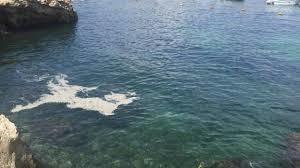 By applying PolSAR Technique, and in this case, using Sentinel -1 A\B, Many other parameters should be taken into account,

maybe the Level-2 OCN products are interesting to you:
https://sentinel.esa.int/web/sentinel/user-guides/sentinel-1-sar/product-types-processing-levels/level-2

Level-2 are mainly for speed (wind, radial surface…) so don’t believe you’ll see much on it no ?

Depending of the properties of your slime you can see it on SAR product (level-1). Maybe if the behavior is like specular reflection … or if it change the properties of the incident signal you can try polarimetry technique.

We’ve done maps on algae monitoring for EMS Copernicus over French guyana as you can see below. I don’t really know if it can work for your matters. 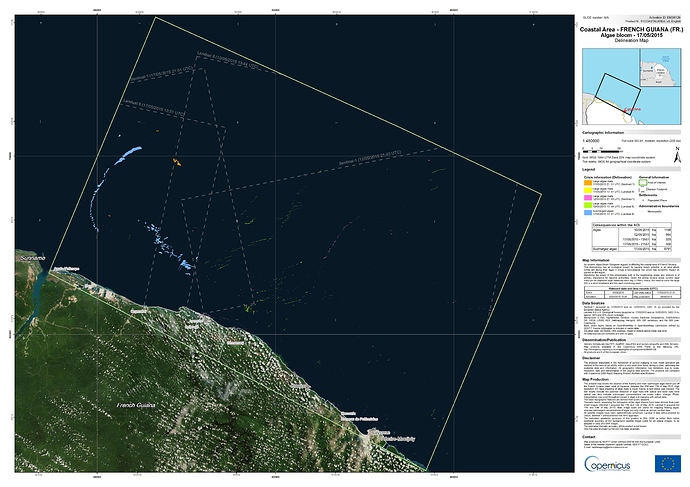 The site for all the maps : http://emergency.copernicus.eu/mapping/list-of-components/EMSR126

Interresting matters … hope the sharing can help you

I doubt the OCN product would help here. They have wave swell and wind information.
You would need to know how the slime affects the radar signal. Start by looking at a scene where you know it exists from your optical data and then get a SAR product for a similar time. Try to see how the texture of ocean is changed with the GLCM. Try to see how the polarimetric properties are different with an SLC and the dual pol H Alpha decomposition or classifier.
If some of these can find some difference between where slime affects the backscatter and where it doesn’t then it may be possible to train the classifiers to find it. Keep in mind the incidence angles and the sea state.
It could be that the signal isn’t changed at all and therefore cannot be seen by radar.

Would you please to tell me where is the place of this phenomena?

The other question, Is this productions of alive fishes or died fishes?

Will send you more details in your personal email

The maximum you would get out of S-1 is the detection of a sea surface effect (supposedly a reduction of roughness or modulation of small waves) that would indicate that there might be a slick. Whether that is oil, algae or “fish slime” needs to be evaluated with the relative context (shape, proximity to source, etc.).

Natural slicks or films caused by biological phenomena (fish, algae etc. ) as well as oil slicks (natural and anthropogenic) and oil+mud mixture (called bilge) can be detected in SAR images because the presence of oil/natural bloom dampens the tiny capillary waves (Bragg waves) on the sea surface. The detectability of these slicks in SAR images, of course, depends on the size of the slick (not visible in SAR images if they are too small), wind speeds (contrast will not be enough if the prevailing wind speeds are too low and at high wind speeds the slick/film will break up and will be too small to be visible), ocean currents etc… Like Oil slicks/spills/biological films, I am assuming that biological films caused by fish also will appear dark in amplitude SAR images. You can either design an algorithm that can extract these dark objects from SAR images and distinguish between the other films on the ocean surface, or you can modify an already existing oil spill /oil slick detecting alrogithm. PolSAR would also work for detecting these slicks (as already stated).

I would like to get some feedback please.
This is a photo taken by sentinel 1. Do you think that the rail left by the ship is oil? As you can see it goes down all the way to the depart point. 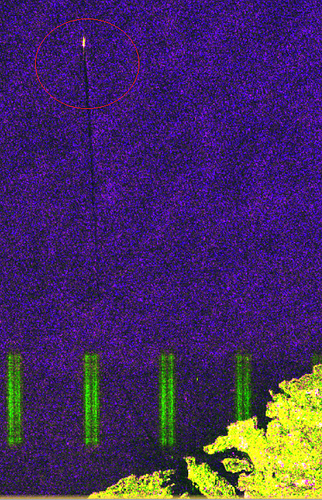