I don’t know if this is the correct place to report this, but I am experiencing an issue when Terrain Correcting two specific GRD products. The resulting output is badly warped near the slice boundary. I haven’t yet experienced this issue with any other dataset, but don’t know if it’s indicative of a wider problem.

This effect does not appear when Terrain Correcting each slice independently. 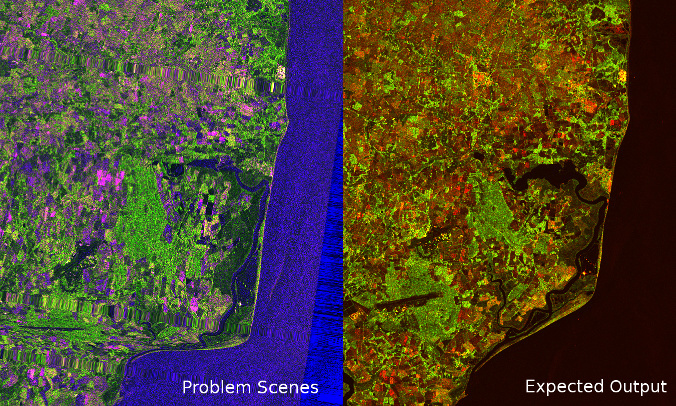 Have you applied the precise orbits?

This effect does not appear when Terrain Correcting each slice independently.

I have not applied precise orbits in this case, but have not seen this problem in any other scene where I have also not applied them.

Most of the output rectifies correctly. The region shown above is an extract near to the slice boundary. The coastline is best at highlighting the warping issue compared to the expected output. The lower part of the scene is really condensed and the middle seems to be stretched out. The problem runs across the whole output.

I have checked the images and applying precise orbits to the assembled product solves the issue.

My guess is that assembling this particular pair of products creates a set of conditions that make the orbit interpolation step (in TC) go berserk.

As far as I can see the orbit info in the individual products is fine. The problem is in the way SNAP assembles (concatenates) the orbit state vectors or in the orbit interpolation step.

Thank you very much for looking into this. Will try applying precise orbits then.