Whether or not flat phase remove in Topographic Phase remove?

Topographic phase is only removed for differential interferometry, not for DEM generation.

You find the tool under Radar > Interferometry > Products

When you create the interferogram (radar->interferometric->products->interferogram formation), there is an option ‘substract flat-earth surface’. If you click this, the flat earth surface is removed for you. You do not need to do it manually.

“Subtract Topographic Phase” should be check or not? and why? 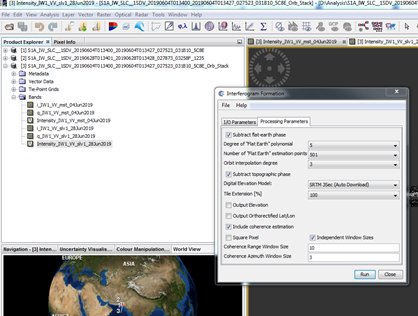 It depends on your application. Subtracting topographic phase removes the fringes caused by the topography (or actually the DEM which is a topographic model). It’s instructive to study the interferogram both with and without topographic fringes so you see what their effect is.

Thank you sir, actually i want to find land subsidence.

then removing the topographic phase makes sense so your interferogram is largely reduced to the phase differences between both images (without topographic fringes) and unwrapping will potentially produce less errors.