Back Geocoding: Master/Slave Order Different in GPT from GUI 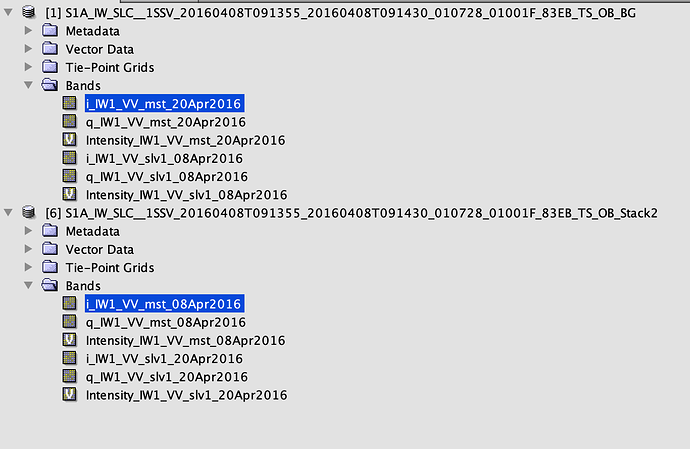 Here is the command I ran:

This leads me to the question: Which is correct? To produce a ground-relative deformation map what is the correct master slave selection?
Since a larger distance between the two sensors would produce a positive value for subsidence it would make sense to use the time-2 product as the master, yet the unwrapped phase to displacement operator has a negative value in the expression, so is that already accounted for?

These are the general steps, should be taken in account while selecting the master image, 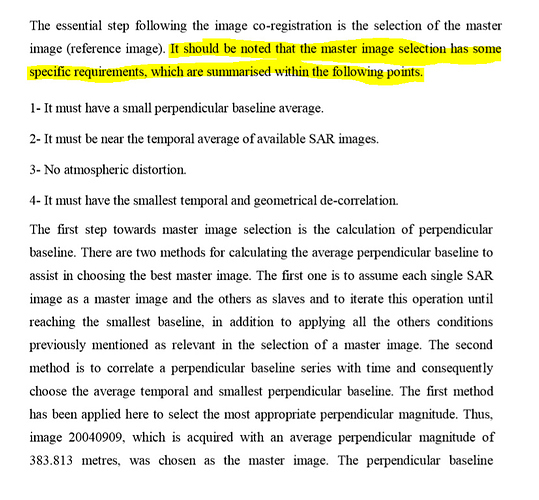 This procedure has been implemented using GAMMA software,

In SANP, from RADAR tab interferometric and then InSAT stack over view, could be applied to choose the perfect master image according to your data,

In this case , would you please to share your .xml file, to check up it,

The reality of the movement in your study area shouldn’t be changed, even if they are two passes (swapping between master and slave) the matter is easiest in this scenario case, I already explained this fact in the following posts, I also pointed out to the meaning of sings “+”, “-”

Thank you for the links, however I am still a bit confused, because the sign is decided by the master slave order combination. Are you saying that choosing the earlier image in a pair as master will produce positive values for uplift and negative values for subsidence? It would be nice if there was a standard convention to follow in the case of these simple two-pass interferograms.

In this document here, https://www.esa.int/esapub/tm/tm19/TM-19_ptA.pdf, the equation for phase to displacement is defined as

In the snap help documentation, phase to displacement is defined as

So you can see the ambiguity here as one has a negative sign in it and the other doesnt; neither state the frame of reference.

Hi all, I’m trying to compute a differential interferogram in SNAP version 5.0 to measure surface deformation after a flooding, using one Sentinel-1 SLC image from before the flood and one after. I’m using an Windows 10 Laptop, 64-bit with 16 GB RAM and Intel i7 core. Now the question is, when I use the graph-builder and “TOPSAR Coreg Interferogram”-graph for the first step I am asked to load the two images. [image] Logically, I would have thought, I use the image before the flood as the f…

However, in the RUS Copernicus training, https://rus-copernicus.eu/portal/wp-content/uploads/library/education/training/HAZA03_Land-Subsidence_Mexico-city.pdf, they use the first image as master and generate the expected results of subsidence, negative values.

The formula was changed in the past, but as of version 5.0 the phase to displacement operator had been using the negative sign for a while.

No, at all, I dient mean that, the main goal of selecting the master image is, to reference all the slaves geometrically to the master image has been selected , the process plays an important role in this operation is, the corrigestration step, that’s why choose master image has plenty of steps should be followed, as I mentioned in GAMMA S/W case,

Let’s take simple example, the pass A is happened before an earthquake event, and the pass B is acquired after the event,

Selecting A or B as master, doesn’t change the fact of subsidence related to the buildings collapsing,

But the sign is used as + or - referring to the uplif or subsidence is swapping according to the software, as I pointed out in the posts I mentioned to you.