Hello,
I need to calculate the vertical baseline between 2 Sentinel-1 aquisitions,
Please, can you help me?

You can use the InSAR stack overview tool

Hello,
In addition to steps listed above, does there other optional steps in order to improve the the height accuracy of the generated DEM? using SNAP

Accordining to the Nest turtorial for Etna, I used:
7. Interferometrix-Products- PHASE to height
and Range-doppler creation.

hi
I follow these steps but getting Problem in Snaphu import but when I apply phase removal than there is no problem, but I want to generate DEM of my study area what should I do?

did you select the HDR file?

What is the “.snaphu” file in your product? Seems like you calculated it with band maths.

No, I select the .img file in unwrapped phase.
.snaphu is unwrapped file and I did not use band math till now.
I did unwrapping in Snaphu in linux . it working properly when i use unwrappe phase (which i get after topographical phase removal)but when I did filtering after Deburst and than Snaphu Export and import getting problem above mentioned.

you should select the HDR file in step 2 of the import, please check here: Problem in Snaphu Import section

But if your data already is .snaphu the import has worked fine I guess

We did all the steps to get to extract images with palsar down from the vertex site, but I do not achieve the last step to extract, we have a debug sequence of the simulation of sar …, thanks for your help
I do not want to make dinsar just extract the dem

@abraun do you know how to get good coherence ? is there any special value for azimuth coherence and range coherence ? Because the result of my DEM does not match the reality and SRTM DEM (there is a minus)

I too having same problem.

I saw your screenshots. You too have only unwrapped.snaphu.img file and no .hdr file

I also want to generate dem.

Did u get solution to this problem?

Can you share your results with me at geetha.sri82@gmail.com

Thanks i really liken it.

I’ve came across this post in one of the forums:

I already have a ‘Range-Doppler Terrain Correction’ band and I’ve done the first step which is creating a final deformation map by choosing a reference point. Please see screenshot shown below: 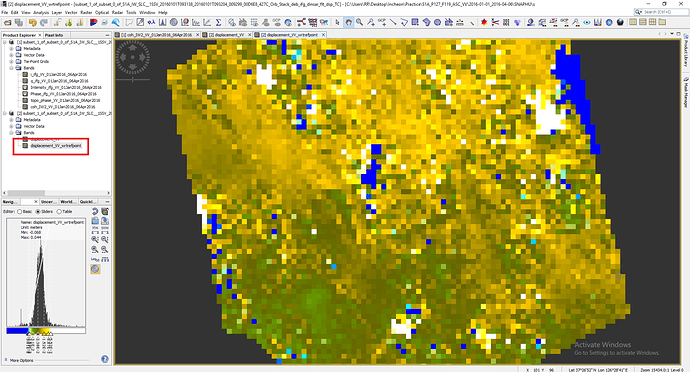 I want to know exactly how to perform the following: coherence mask creation as mentioned above and the rest of the steps until I obtain the “final product” as mentioned, too.

I hope you can help me with this.

I followed the entire discussion and I did DEM creation by following as you mentioned above steps; 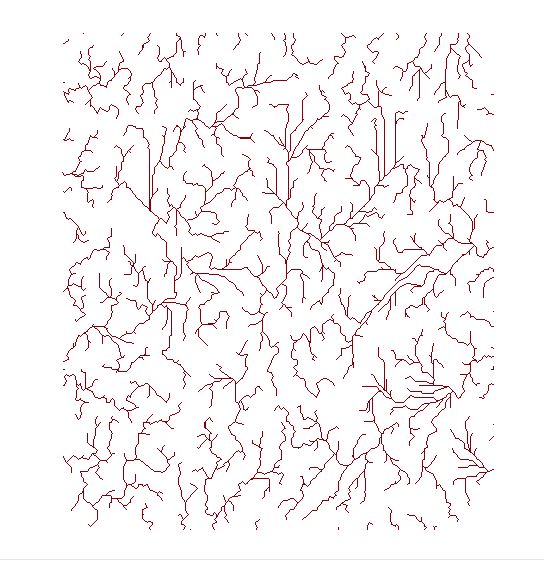 but the problem is while comparing the Sentinel 1 drainage output with the SRTM drainage output, the resultant is totally different, both are not matching even 5% also. what is wrong with this result could you please help me to get the better results.

Thank you in advance.

I explained in the following post in some details, the selection and creation DEM from S-1 pairs

While in the following post, I explained the difference between the SRTM DEM as an example, and the once is formed by S-1,

I am new to SNAP and I am trying to create a DEM for the Ammassalik region in Greenland. I start with the following two steps:

The phases in the interfarogram show nothing but noise however.

I use GETASSE30 DEM for corregistration. Would it help do download the ASTER DEM?

I have tried to run different tutorials and that works fine for me. I have also tried a number of different image pairs to see if coherence was the problem, but each time the phases show nothing but noise.

Anybody, who can see what I am doing wrong? 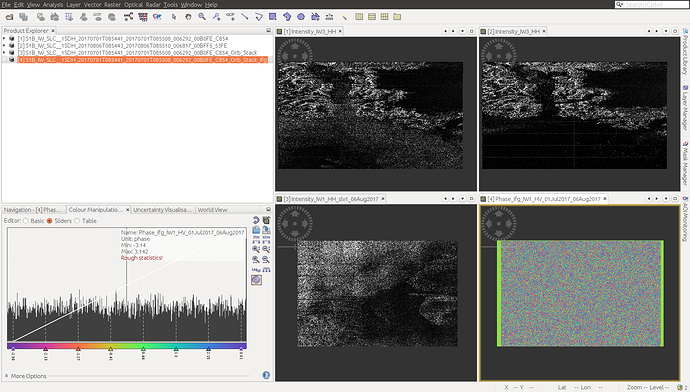 you can check if the coregistration was sucessful by creating an RGB of both intensities as described here: Fault marking by InSAR Data and difference between SLC_1SSV and SLC_1SDV?

Is there a reason why you selected exactly these two dates? For a more stable phase and higher coherence, you should aim for images with smaller temporal baseline. Also the perpendicular baseline plays a role. Have a look at this document http://www.esa.int/esapub/tm/tm19/TM-19_ptB.pdf
Section 1.3 Selecting images for InSAR DEM generation

Thanks for your rapid reply @ABraun, I have attached a RGB - does not look perfect to me.

As I could not get it to work, I tried a lot of different things, including changing the baseline and only using observation from Sentinel-1B, which resulted in a longer temporal baseline. In the RGB, I have changed that back, but it did not help.

Would it help to use the ASTER DEM for corregistration? 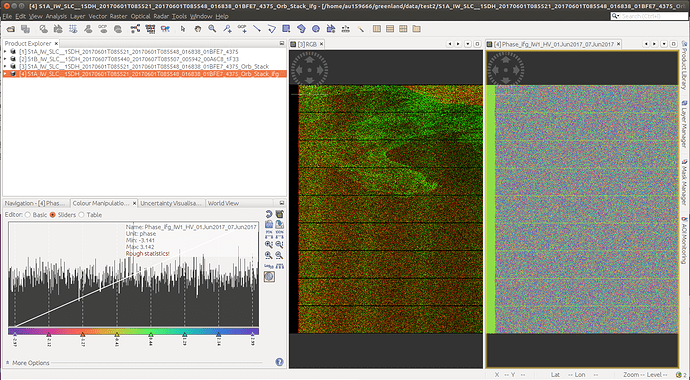 Yes, the coregistration failed. Try to exclude the bursts over water in the Split step and also try other AutoDownloas DEMs.