I am trying to use ERS interferograms to map ground deformation in a rock desert. This region changes little except for the deformation and remains coherent over long time periods, and as a result I have been able to form interferograms from ASAR spanning 6 years without difficulty. However, I am unable to form satisfactory interferograms of the region using ERS. My workflow is

The resulting interferograms are mostly noise, although sometimes I can make out a few wide fringes of topographic origin in flat areas (before the topographic correction is applied).

I think the problem might be to do with the coregistering step, because I’ve had to increase the number of GCPs to get what results I have - with default settings the coregistration fails outright. I’ve tried experimenting with the parameters in the cross correlation and warp window, but often the coregistration fails, and when it works I’m never able to get a reasonable looking interferogram.

Does anybody have any tips for coregistering ERS image pairs? I’ve had this problem with almost all pairs of ERS images I have tried that cover my study area - only a tandem ERS1 and 2 pair taken a day apart produced anything useable.

I don’t think it’s a coregistration issue. If your data are 6 years apart there can not be much correlation left between your images. Have you checked coherence layers for areas > 0.3? 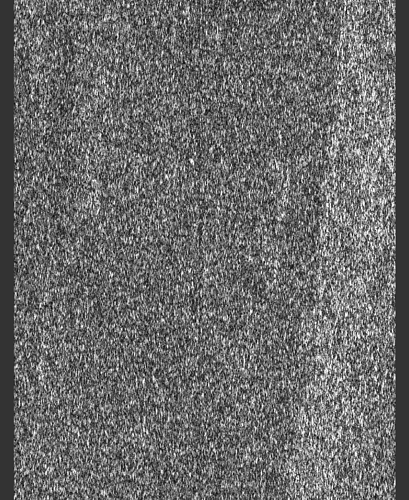 I’m not sure how to check how much of the image is above 0.3, but according to the color manipulation window the maximum value is 0.332, so presumably not much of it is.

I was hoping to be able to reproduce something like this 6 year interferogram from ASAR shown on the left in the image below, however I get the very noisy looking image on the right. I know from other sources that there was a lot more deformation between 2003 and 2010 than between 1996 and 2000, but otherwise not much should have changed between the two periods - I cant think of a reason why the later period would be much more coherent than the first, so I assume it’s something to do with the different sensors? 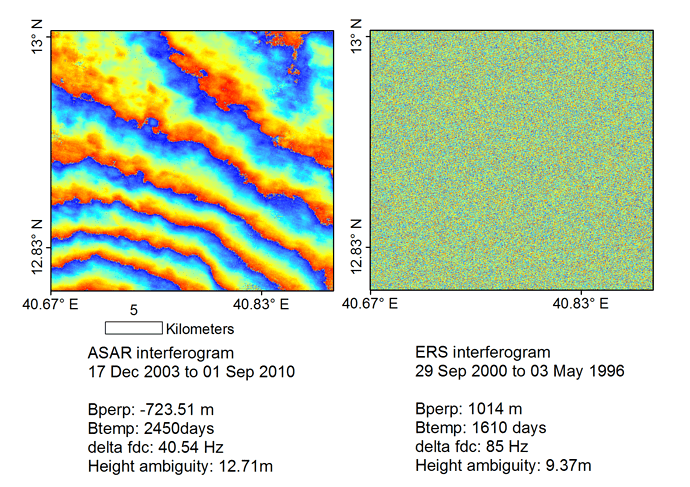 the ASAR example you post would surely have coherence values > 0.6 through the whole image.

If you have much vegetation cover on the ground coherence decreases rapidly, mostly within days/weeks.

Many thanks for your reply, the ASAR coherence image spanning 2003-2010 looks like this: 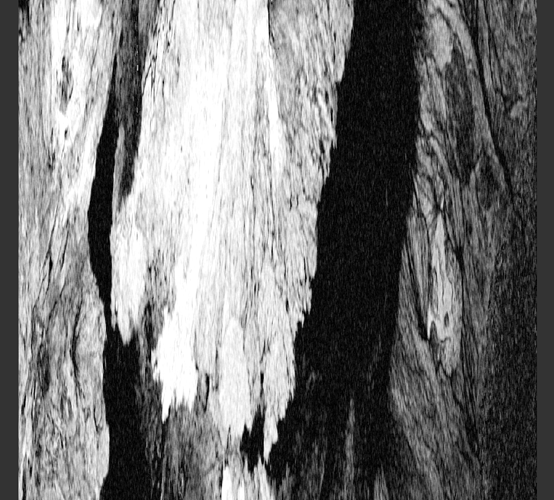 and a large fraction of the image has a coherence of above 0.3, while the ERS coherence image I showed in my last post is almost entirely below 0.3.

However both the ERS and ASAR interferograms are looking at exactly the same unvegetated desert area (mostly basalt lava flows), and I have followed the same processing steps for both, so I’m trying to figure out why the ASAR pair produces a good interferogram and the ERS pair does not? I don’t think the area has lost vegetation between the ERS interval (1996 to 2000) and the ASAR interval (2003 to 2010).

You are too close to being over the “critical baseline” of 1100 meters. Try to find a pair with a small baseline and similar Doppler.

Thanks! I’ll look for a shorter baseline pair.