unfortunately, not all ALOS data are featured in ASF…
Try to find a quad-pol scene from another location just to see if the problem comes from the ESA data.

I found some quad pol on ASF and it did actually work. It is just not over my area. That means that something is different with the ESA data,but I don’t know what.

But I can open and pretty much do anything with the ESA quad pol data, as long as it doesn’t incorporate Geometric operations. (in 6.0 at least)

PolSARpro makes a difference regarding the ALOS resources from different providers. Could be that SNAP doesn’t fully support both formats.

I can process and use the quadpol data in Polsar, but the issue is still to be able to do some georeferencing.
Does Polsar have any way of geocoding data?

Or can I process the data in Polsar and/or save it in a format that can be read by Snap?

(See edits)
I found this, but it is asking me to link Polsar with the s1tbx, which is weird since it asks for an .EXE file, and the only .EXE file I can find is the one that opens Snap. All files found in the s1tbx module folder are .jar files.

I tried the snap exe file but that one only gives me an error message, not surprisingly. 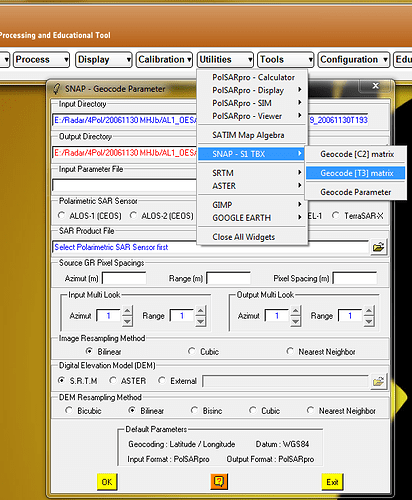 EDIT:
I found and installed the sentinel toolbox 1.1.1 but now my previous link is faulty, how can I change a program link in Polsar?

Edit2: Well I apparently didn’t have the newest version of Polsar. Installed it and now it asks for a link with snap. I did that and when I am about to geocode I get this message: 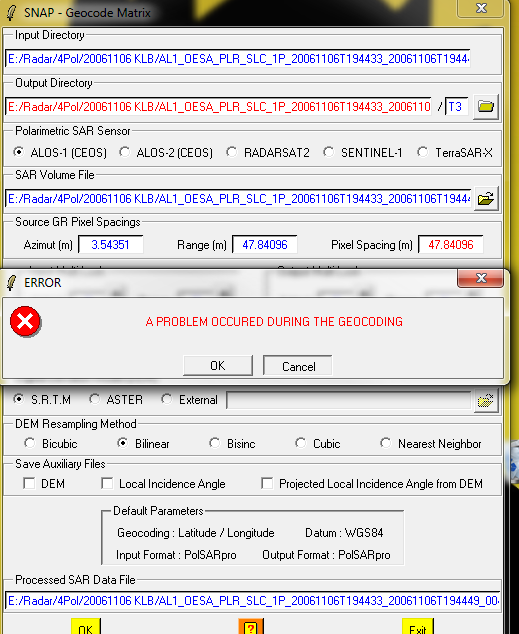 I’m sorry for all the edits. I’ll play around with this a bit now to see if I can get it to work

But if you know the procedure for georeferencing with Polsar I would greatly appreciate any input!

Georeferencing has to be done in SNAP at best, you can import your files into SNAP (no need for version 1.1.1, just use the latest you have) and you can change the links afterwards as well.
Both is explained here: Help installing PolSARpro software step by step on detailed on the windows 7 system

Thank you for the continued help by the way.
But how do I import my files into SNAP in another way that I havn’t tried? 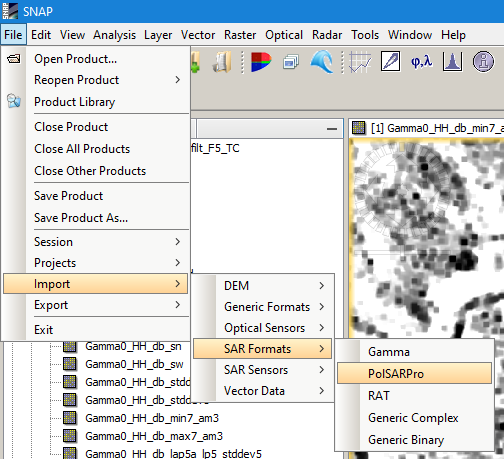 Oh of course!
But then how do I export to PolsarPro format in Polsar?

the files are already written in PolSARpro format during the processing, no need for an export.

These tutorials will help you:
http://cobalt.cneas.tohoku.ac.jp/users/sato/PolSARpro%20Tutorial%20Notes.pdf

I tried importing a multilooked scene from Polsar into SNAP, but absolutely nothing happens, no error message - nothing. It doesn’t even work in the background or use processor power or hangs. It just doesn’t do anything.
I tried with the PauliRGB.bmp.hdr file. 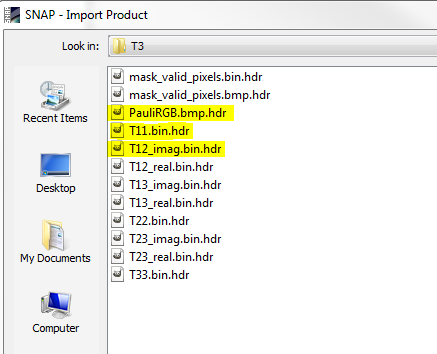 I did also try with the T11 and 12 files just to see what happens and understandably I actually get an error message saying it doesn’t know its data type.

you are right, I get an error as well when I want to import PolSARpro files.

But in the new version 5.1.1 you can directly address the SNAP command from inside PolSARpro. Worked fine for me. 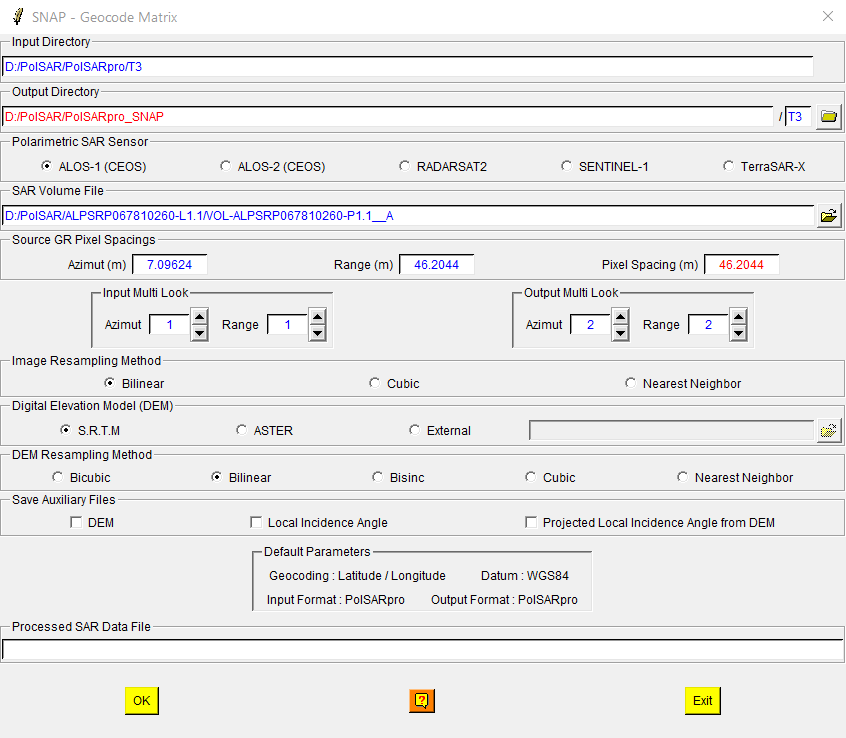 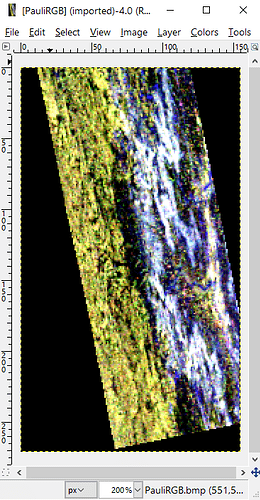 It worked well with dual pol though, I’ll try with quadpol from ASF a bit later as well

One my machine, the anti-virus software first checked the exe files of SNAP called by PolSARpro which lasted a few seconds. Maybe something similar happened at your side and caused a timeout. But this is only a guess.

I’ve tried two different machines and I get the same error. As of now I am pausing the efforts to get he quadpol to work and I’m focusing on the dualpol. Which at least geocodes the images, although the resulting image seems to be off by 500 meters or so. But that is another problem maybe for another thread if I can’t get it to work.

sorry to hear that…

Thank you for your help so far. I’ll have to revisit the quadpol soon though. But by then I might be able to have SarScape to try with. We’ll see if that works!

I did a quick test with ASF MapReady with the same dataset. It seems to be working fine until the terrain correction. Every error I get, even when selecting a DEM that absolutely matches the SAR-scene is: “Error, SAR and DEM datasets does not overlap”.

This intrigued me and therefore I tried with different DEMs but all with the same error.
In ASF MapReady there is a option to see the center of the SAR-Scene in google earth (There is a similar functionality in PolsarPro).
What it showed me was a place in the ocean to the west of Africa… my area is to the east of Africa! Northern Madagascar that is.

When loading the image in ASF MapReady it says:
“Approximate scene center latitude and longitude (-16.46, 44.72) appear outside the bounds of the image
…Recalculating from center line and sample instead”

I don’t have any solution but a part of the problem might be how either the geocoding is written in the ESA files OR how they are read. But since I get similar errors in PolsarPro, SNAP and ASF MapReady I guess it might have to do with how they are written or created.

I just tried it with QuadPol data from ASF Vertex and it works completely fine: 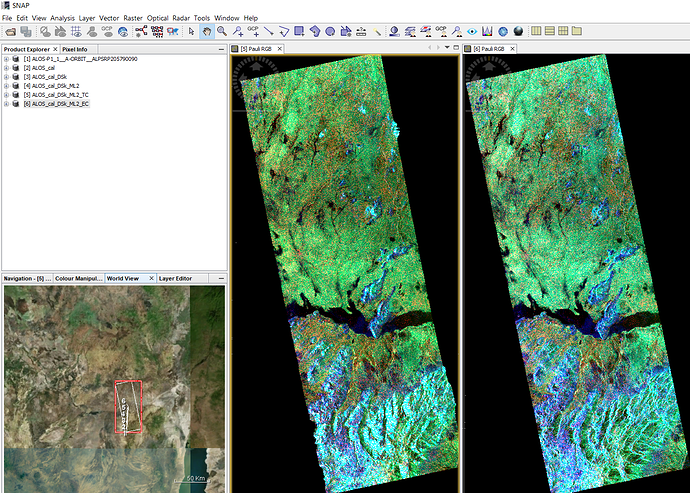 From ASF it actually worked for me as well. I would be glad to use it, but the problem is that there is no quadpol over my area on ASF. My data is from ESA EARTHNET (https://earth.esa.int/web/guest/-/alos-palsar-fbs-fbd-and-plr-products)

I redownloaded some scenes but it didn’t really change anything.

I don’t know if you have access to any data from earthnet but it would be interesting to see if that would work for you.