i have a problem using the EXTERNAL DEM during the coregistration of two SLC data of Sentinel-1. The problem is that the slave image of the coregistered product is empty.

Can someone help me?

Still I have similar problem, but did you check up this post,

is the DEM smaller than the Sentinel-1 data?

Also here, what do you expect by using a DEM of this high resolution for coregistration? The DEM is only used to estimate the offset between both images based on terrain features which are also present in the raw radar data (no radiometric calibration applied).
I don’t think you need a DEM with 1m at this step already. Later, for Topographic Phase Removal or Terrain Correction it makes more sense.

Thank you for responding so quickly.

Yes the DEM is much smaller than the Sentinel-1 data. Could that be a problem?

I used ACE30 for the BackGeocoding and later the 2m DEM (I reported in the other topic) and this worked fine.

DEM-based coregistration tries to find patterns which exist both in the DEM and the backscatter intensity. If the images are not of equal size or resolution these patterns cannot be found and no GCP are created and the coregistration fails.

I used SRTM 1sec (Autodownload DEM) for BackGeocoding and it works.
The workflow I I want to follow is that below:

(NB: I didn’t use the Graph Builder, I choose the desktop command for each step).
The problem is at Tophografic Phase Removal step. I will use a 1m DEM that is bigger then the subsett area, EPSG: 4326, nodata value: 0.0 . I’m think that something is wrong with my 1m DEM because if a use Topographic Phase Removal with EXTERNAL DEM Autodonload SNAP works.
I will send you a mail with my DEM, hope you can look up at it and suggest me if there is somethink wrong.

because if a use Topographic Phase Removal with EXTERNAL DEM Autodonload SNAP works.

if you use the external DEM no AutoDownload is necessary. This only includes the DEM resources which SNAP can access by itself.
If the BackGeocoding works with ACE30 or any other DEM (SRTM, in case your study area is covered) you can still use the external DEM in the topographic phase removal. Do you get an error here?

yes, the problem is that when i use AutoDownload DEM SNAP works, but when i try to use my DEM that has a higher resolution (1m) than the AutoDownload one, SNAP doesn’t works. There is not a specific error but i have no output.

According to this answer for me, the high resolution less than 10 m brings an issue of processing or an error,

please have a look at this answer,

There is not a specific error but i have no output.

but the stack was correctly generated by the BackGeocoding?

My working area is East Antarctica. I am trying to measure ice velocity using interferometry, relatively new to this field.

I am using REMA_100m_dem for this region.

My data SLC products are:

is uit possible that the external DEM is stored in UTM coordinates? They can be negative in some areas.

you are right, units are in meters and projection is polar stereo-graphic.

so do i need to re project raster?
any other alternative DEM that i can use in this region?

yes, you should reproject the DEM to WGS84 (EPSG:4326), for example with the gdal libraries
https://gdal.org/programs/gdalwarp.html

thank you @ABraun sir for a quick reply

Yep I tried it too. I don’t know if it is because it’s at very low latitudes but the “warp” function does not resample correctly. It does not take into account areas below 70° South Before reprojection : [image] After reprojection to 4326 (and re-reproject on-the-fly in 3031) -> you can observe a small gap in the middle of Antarctica with no value [image]

I processed data Ace30 DEM as Geo-coding and terrain correction and REMA 200m DEM in streographic projection as in subtracting topographic phase removal …and this is the result i got as displacement. 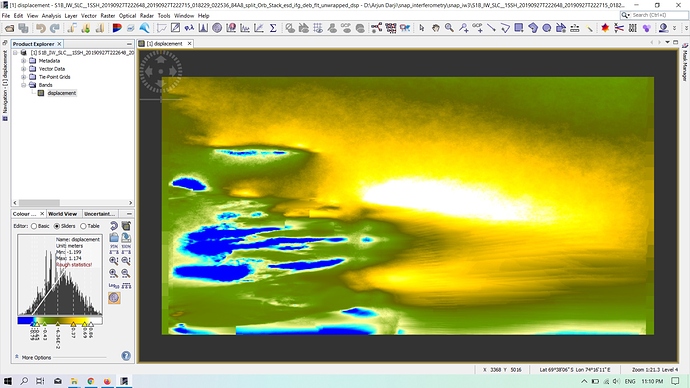 it doesn’t look (technically) wrong to me.

you find many discussions on this using the search function: