Problems with creation of accurate DEM with S1 images

I have a problem with the selection of S1 images (SLC) for the creation of a good DEM. I tried to download many pairs of different images with a short time difference and big baseline between there, but at the end of coregistration i saw that the coherence estimation was not good. The histogram obtained from coherence estimation tool hadn’t 70% of frequency values over 0,4 of coherence values. That isn’t a good result, if i understand well: infact the DEM that i obtained have a lot of errors and is “foggy” in many areas and elvetion values don’t correspond to SRTM DEM elevetions. Now i ask you if there is a quickly method of selection of the images. There is a method to understand if two images are coherent without necessarily having to carry out coregistration first and then the coherence estimation? In the end i want to understand why two images are coherence between there or not, what is the parameters that determinate it?

Thank you a lot.

First please take a look at this whole thread, the Creation DEM from S-1 is discussed there,

In general it’s possible to get an idea not mathematical results about the coherence of the study area, in case the study area has less stable objects within the resolution of the SAR images two passes, and highly vegetated or smooth area in this case and expectation of low coherence is first prediction; vise versa, spread of stable objects such as buildings ,… could give an expectation of high coherent images.
But it’s not possible to get a mathematical estimation of the coherence without processing the pair.

I have another question, what is the best method to use S1 datas for recognition forestry formations

It is possible to calculate the Radar Vegetation Index, RVI, this topic is quite discussed in here, and how could be modified the equation,

Also you could take a look at

Also it is possible to classify S-1 images (GRD) 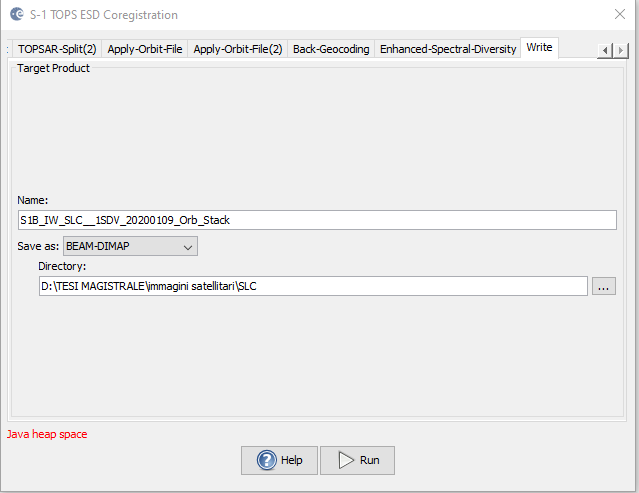 I would like to know if any of you know how to solve it, considering that my PC has the following characteristics which I think are more than enough to handle this type of data.

The S1 TOPS Coregistration is a chain of multiple separate operators. 16 GB of RAM is often not sufficient to execute all steps in sequence, especially when you select many bursts in the Split operator.

I recommend to execute the steps separately, especially reduce the number of bursts as much as possible and make sure that you only use VV polarization.

Please have a look at this tutorial: DEM generation with Sentinel-1 - Workflow and challenges

Do you think it is enough to get a good DEM?
Loading the raw images VV_IW3 on ArcMap I saw that there is a slight difference in the burst where my area of interest falls (600m), do you think this could compromise the alignment of images, or will the error be corrected automatically by SNAP? 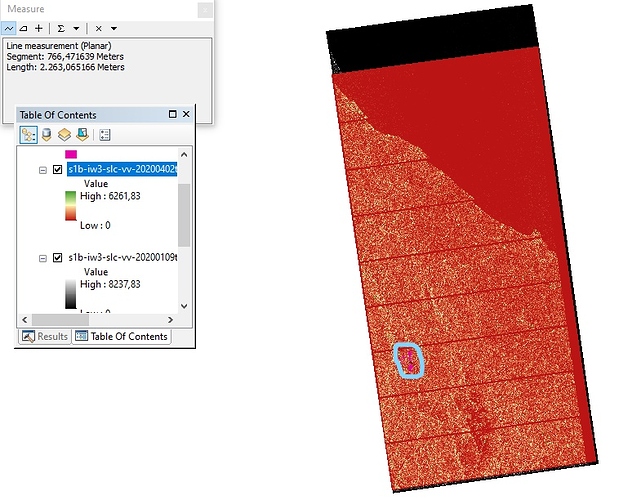 Have you incresed the maximum RAM available to Java? It is described in these posts.

In case you only need this small AOI, why do you select all bursts in the Split process? You reduce the processing time and the chance of unwrapping errors if you keep the raster as small as possible.

I cannot tell if the conditions are good for the generation of a DEM, this mostly depends on the vegetation cover of your area (which is always bad) and how the interferogram looks like.

Thanks ABraun, I managed to get the first DEM, these are the results by applying both phase to height and phase to elevation: 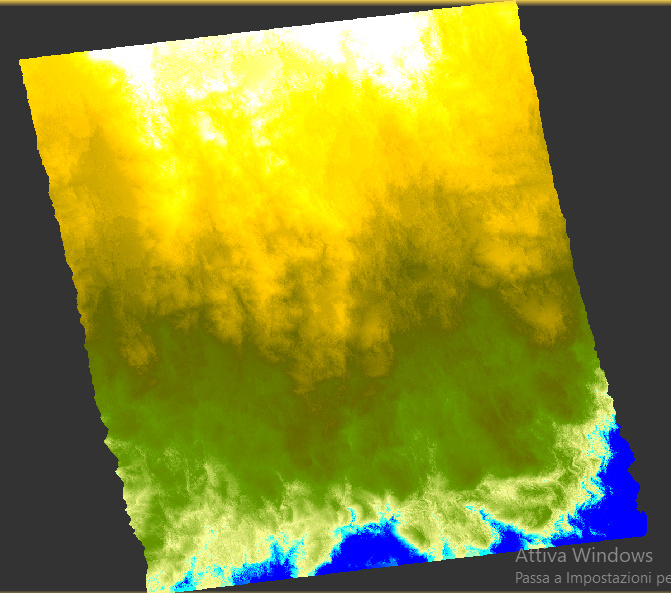 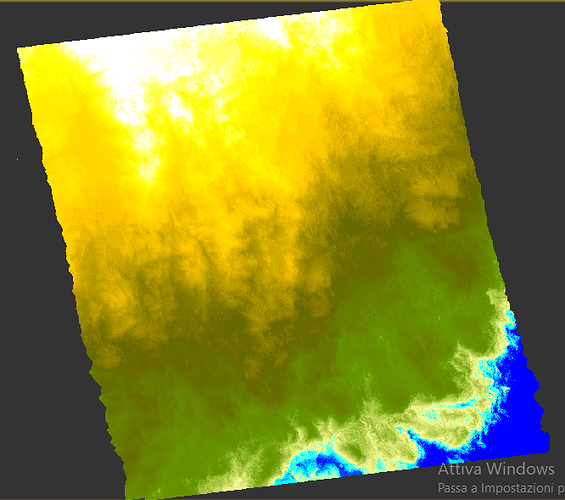 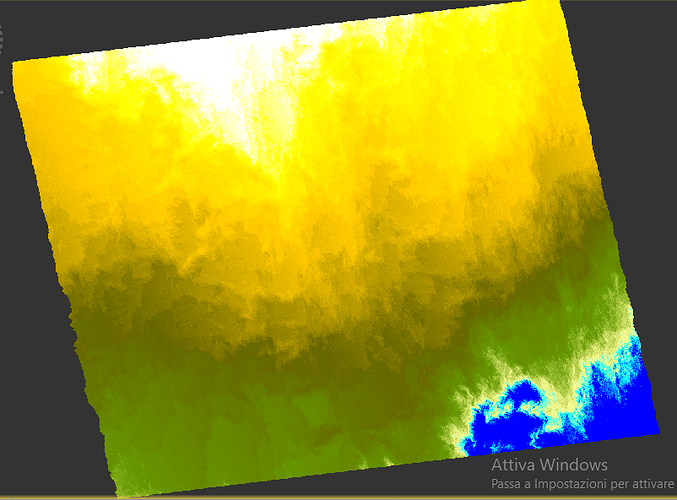 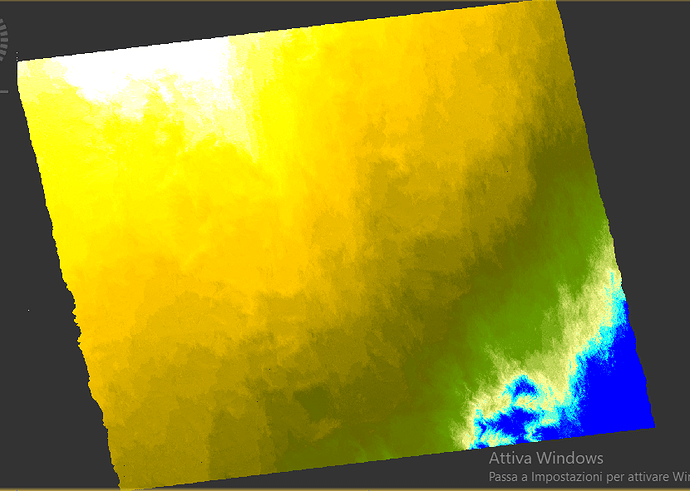 in relation to the following study, I cannot understand how the results can be so different, despite the fact that we used pairs of different images, theirs have a slightly wider baseline (148 vs 172) but extremely worse weather conditions, as well as a remarkable vegetation cover. There is a SNAP function to obtain a DEM as in the image D pg 112.

I also wanted to ask you whether by spectral subsetting (VV), in their workflow, they simply intend to select the VV polarization when applying TOP-Split, or they intend the ESD correction in VV.
Furthermore, it is not very clear to me why they use the topographic phase removal correction, when from my studies it is not necessary to do it.

If you want to retrieve elevations, you do not remove topographic phase. This is exactly the component you want to estimate from the InSAR data. When you remove it you have no topography left in the phase. How should a DEM then be derived from it?

The study you show is really strange.
Their interferogram (5A) is pure noise and there is no chance that you get any elevation information from it. The unwrapped phase (5C) looks like in your case, simply a ramp from left to right, because there are zero fringes to unwrap. Additionally, they removed the topographic phase which makes even less sense.
What they show in (5D) can never result from (5C). I suppose (5D) is the topographic phase as it was modeled from the SRTM which is used in SNAP. This explains their high accuracy reported in Table 2. To me, this study is not scientific at all. 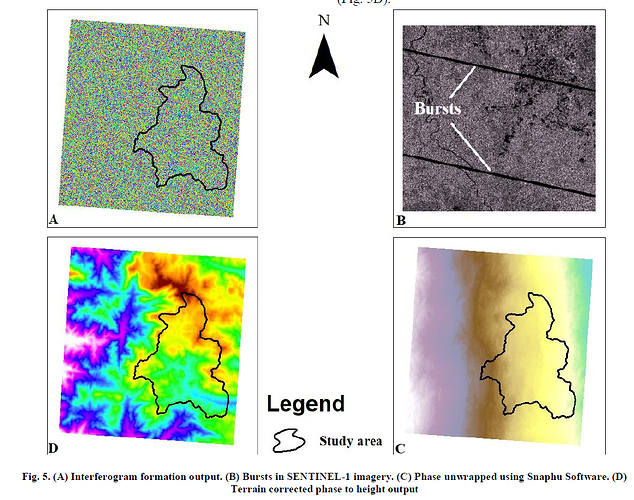 Please check the steps suggested in the ESA tutorials instead:

In other sources, the topographic phase is not removed as well, for example the tutorial from ASF:
How to create a DEM using Sentinel-1 data

thanks ABraun, your advice as always is very useful. I imagined that in that paper they obtained results not exactly corresponding to reality, I had the confirmation when today I tried to obtain the DEM with their pair of images. Instead I find the totorial you sent me about the Radarsat2 platform very interesting. I saw that the maximum resolution that can be obtained is 20x20m right? Also I believe the images are not free, will you give me confirmation?

yes, Radarsat-2 is commercial. I think even higher resolution could be achieved in some cases, but in the tutorial I preferred a stronger multi-looking to smooth out some more noise.
Sentinel-1 allows 10 in the best case, but only over unvegetated ground.

Thank you ABraun, I’m trying to get a DEM of the municipality of Fiuminata (Marche, Italy). The big problem of our territory are ecological gradients that vary very quickly in space, so it is difficult to find a period of the year totally devoid of vegetation. In addition, the area in question is located on the Adriatic side of the Apennines, this means that very often it is subject to strong cloud cover (stau effect): it is therefore very difficult to find a pair of images that has a correlation, even in the best conditions atmospheric, above 0.4.

These are the results obtained: 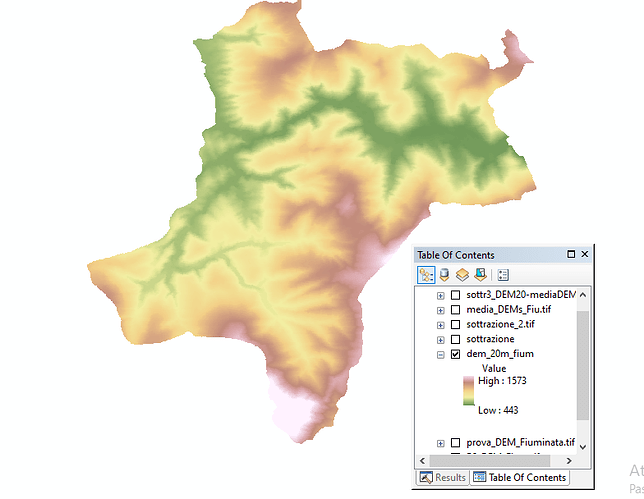 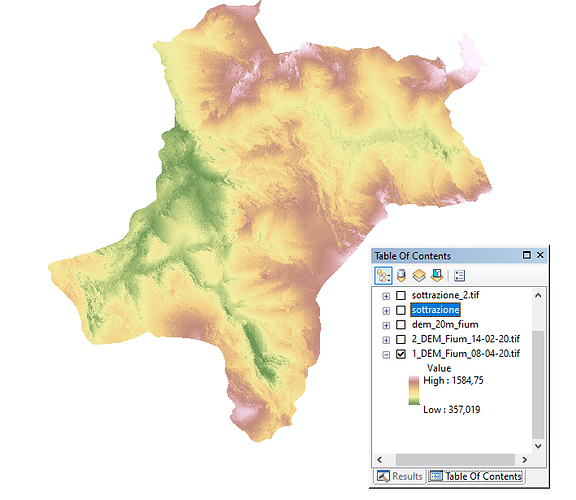 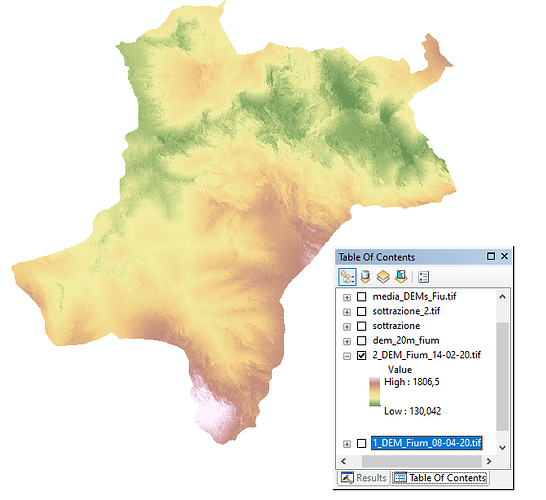 For a first check I subtracted the DEM_20m from the two DEMs obtained to get a macroscopic view of the differences between the rasters. Results: 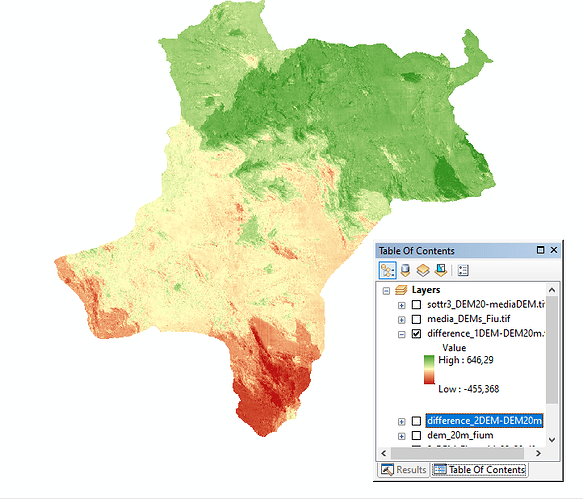 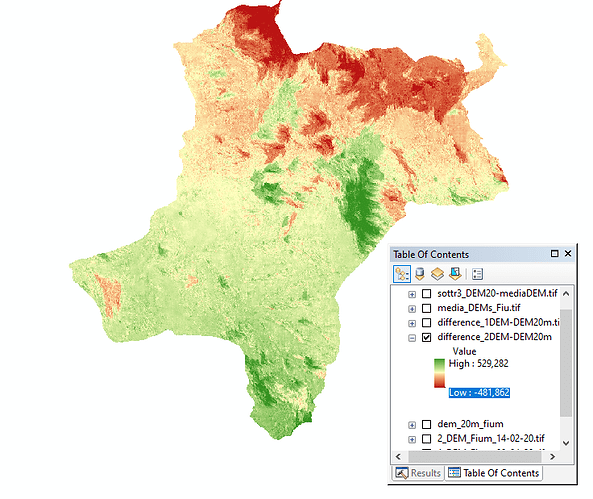 As you can see in some areas in many areas the DEM obtained by Sentinel1 cannot be precise. I noticed, however, that the areas that differed a lot as a pixel value compared to the DEM20m in the 1DEM-DEM20m difference were instead very similar in the 2DEM-DEM20m difference and vice versa. I hope I was clear. To solve the problem I tried to average the two DEMs obtained by Sentinel1 between the pixels, obtaining a DEM much better than the first two. 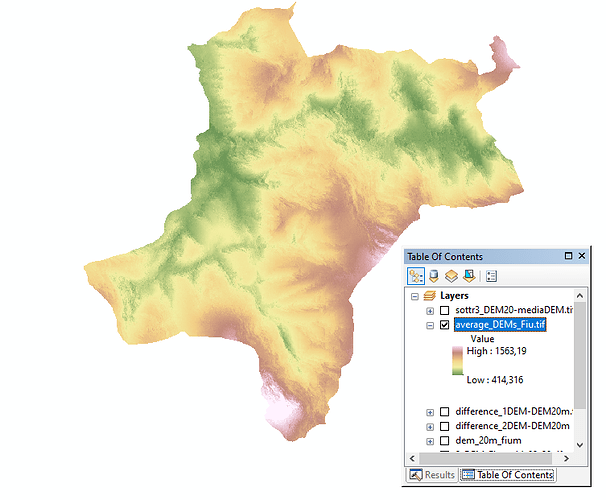 As you can see the product is much more similar to the reference DEM, but despite this there are areas where the difference between the two layers is very large: 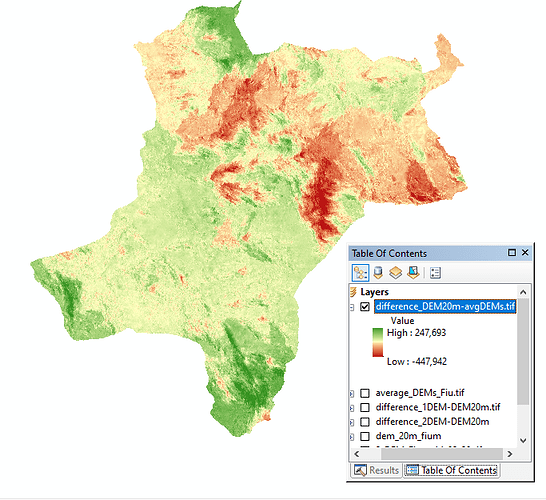 now I would like to understand if with a right number of DEMs obtained for the same area I could manage, by averaging, to obtain a good quality DEM with the SAR Sentinel1 images. It would also be of great help if there was a way (plugin or operator already existing) in Snap or other GIS Software to be able to perform the following operation: Choose a reference raster (DEM20m) and ask to software to build a new DEM by choosing the value of pixels closer to that of the reference raster among the pixel values of all the other DEMs (sentinel1 DEMs slaves) that I have. Do you know if such a function already exists?

As always thank you

first of all, good job!
It is very hard to get a reliable DEM from S1 SAR data in the first place, especially in areas with vegetation.

Averaging DEMs can lead to better results, so your appraoch might be usable in your case. To make most use of multiple images

I know, these are hard constraints, but this is the only way to influence the result.

The ASF Baseline Tool can help you to select suitable image pairs.

For a short search, I found these pairs

I haven’t checked them for seasonal effects, but you have to go for the image pairs with large baselines

thanks ABraun, the ASF baseline toolbox for images selection I had already discovered it, and I have been using it since the beginning of my research. Surely the use of different paths (ascending and descending) to have a better coverage of all areas is an excellent advice that I will pursue. I will try to elaborate the pairs of images that you have suggested to me.

As for my question in the last post, are you able to tell me if a plugin or operator already exists?

If you have more than two pairs, you probably need a nested logic.

Hi ABraun, I wanted to ask you if there is a way on SNAP to cut images. In fact, I realized that in all the images with a descending orbit of my study area, they inevitably have a very conspicuous stretch of sea and this only disturbs the interferogram at the moment of unwrapping. So although the image has a general correlation of 0.42 and an interferogram with G.filter at first sight discrete, when creating the DEM, the latter is not minimally acceptable.

So I wanted to ask you if there is a way to make a cut out of the coastal area only. Thank you

the best suggested solution so far was presented here: Is it the right way to create mask for phase unwrapping?

Thanks ABraun, but it’s not very clear to me. Does the user in question use a DEM in tif format owned by him? Why did I just try it with a DEM in lyr format but it gave me an error, will it simply be the wrong format?

SNAP needs external DEMs as GeoTiff and stored in WGS84