I am trying to do my own conversion of L1C images to L2A due to ESA’s long-term archive system. I’m using Sen2Cor v2.9 on a Linux system to convert my images. I’m finding that there is an odd geometrical relict that appears to be coming from inclusion of the DEM, even though the DEM is fine. I’m not sure how to fix or mitigate it. Does anyone have any suggestions?

I have confirmed this behavior is solely due to the inclusion of the DEM, not the added inclusion of ESACCI-LC.

Using the parameters set as noted below, I ran Sen2Cor on an L1C image with the SRTM DEM and ESACCI-LC add-on to create the L2A image, then I differenced that image with the L2A file directly from Copernicus. When I look at the differenced image, I saw odd geometry so I decided to look at the image bands on their own. Shown here are the 10m bands for My L2A conversion (the first panel shows my study points that I’m extracting values for). 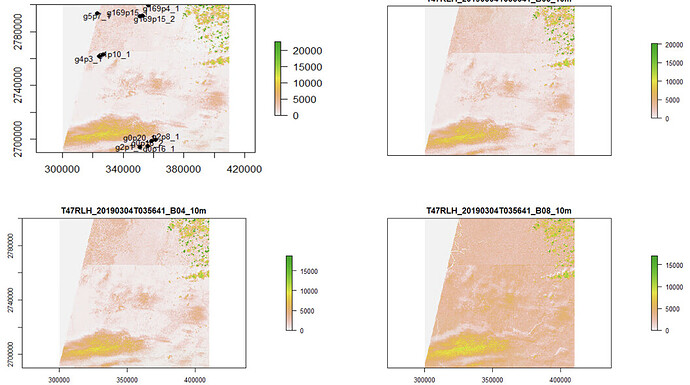 Here are the same bands for the downloaded Copernicus L2A. 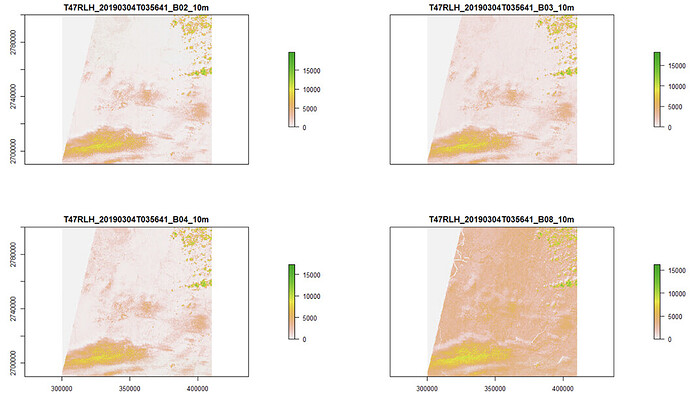 Note that though I’m only showing the 10m bands here, the behavior is consistent across the 20m and 60m bands as well (and also for AOT).

I double-checked the DEM file itself, which appears to be fine (this is 6_5x5_TIFs/srtm_56_08.tif). I can not upload extra media to this post because I am a new user.

This is the direct command I used to convert the L1C image to the L2A image I used to create the pictures shown above, following the convention of the user guide page 35.

I differenced that image with the L2A file directly from Copernicus

For the official products a different DEM is used.

Hello drozenrechels, unfortunately you will find on SciHub no homogenous time-series as you look for. The data you can download are processed with very different Sen2Cor-versions and especially in 2018 there had been major changes. You can find more details in [B. Pflug et.al.,“Next updates of atmospheric correction processor Sen2Cor”, Proc. SPIE 11533, Image and Signal Processing for Remote Sensing XXVI, 1153304 (20 September 2020); https://doi.org/10.1117/12.2574035]. If this is not sufficie…


This might be the reason why you see the difference.
The DEM used is Planet DEM. But it is not freely available.

But actually I don’t know why the different DEM could lead could lead to the strong horizontal edge.

P.S. Thanks for the good documentation of you case.

Thanks @marpet for your response and linking to the paper. I figured there would be some differences due to the DEM, but yes, the horizontal edge is confusing me. Overall I wanted to make sure I wasn’t making some kind of processing mistake on my end.

My labmates suggested that potentially the SRTM DEM I’m using wasn’t matching up with the S2 tile. So I tried the following: (R code below)

The images below show me 2 things. First, Sen2Cor v2.9 is correctly cropping the SRTM DEM tile to the extent of the original Sentinel2 tile. Second, because the DEMs do not match up, that’s where the hard horizontal edge is coming from. This tells me that Sen2Cor is pulling in the SRTM tile from above (srtm_56_07) to stitch together, but the DEMs are not equal in value / do not overlap well.

What are your thoughts? How do you propose moving forward? 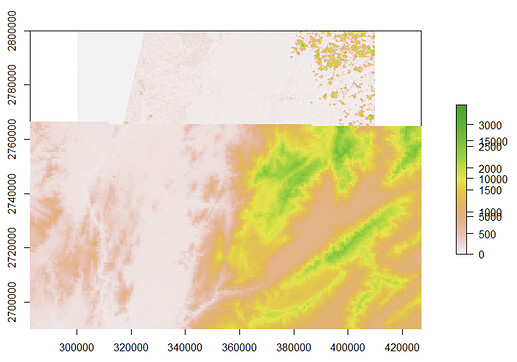 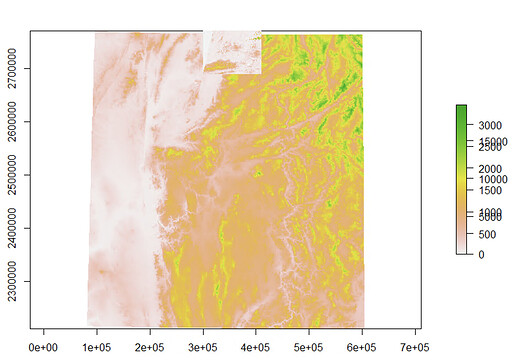 I looked at the data. 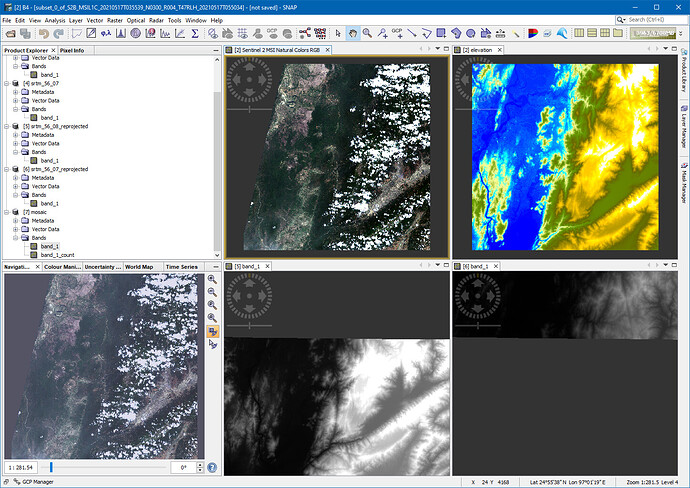 Upper right is the result when selecting ‘Add Elevation Band’ in SNAP.
The two lower images are the original SRTM tiles reprojected to UTM.
When I do a mosaic of the two tiles I get also a smooth result: 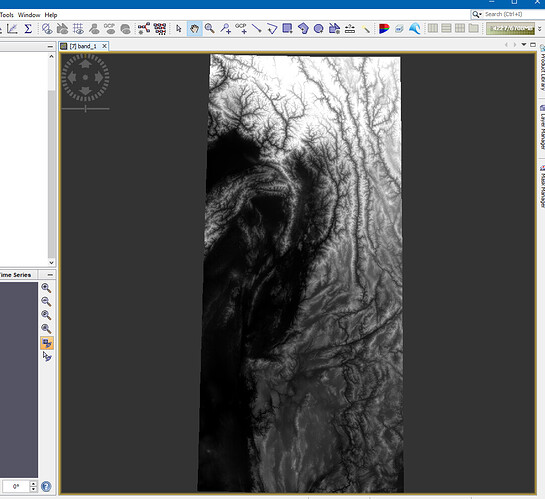 From where have you taken the SRTM data?
A suggestion:
Use also ‘Add Elevation Band’ in SNAP for you products.
When you open the image the data will be downloaded to
<USER_HOME>/.snap/auxdata/dem/SRTM 3Sec
Extract the tif files from the zips in this folder. Maybe they do work better.

I downloaded the SRTM data from this site (SRTMv4.1.zip) as per the user guide and put the two constituent folders in my Sen2Cor folder.

Each SRTM tile still remains in a .zip folder; it was my impression that Sen2Cor unzips these and uses the .tif files as needed, but perhaps I’m wrong and that’s where the issue is occurring.

Thank you for your suggestion for SNAP, however I am using Sen2Cor standalone on a Linux system (via terminal) and there is no option for ‘Add Elevation Band’. Thoughts?

standalone on a Linux system (via terminal)

Maybe you can use another system?

But it can also be that sen2cor handles the data wrong.

Unfortunately the linux system is all I have at the moment.

The horizontal edge was still evident in the output files. So I checked the output DEM and this is the result

I then checked my DEM file structure, and only 1 of the tif files was extracted, namely, the bottom part of this image.

Overall this indicates to me that Sen2Cor v2.9 on Linux terminal is not correctly extracting and fusing the necessary DEMs for the corresponding Sentinel 2 tile. How do you suggest I move forward? Is there someone at ESA I should notify?

I don’t know who should be informed. I think Uwe Müller-Wilm (@umwilm) is a good contact point. Also Fabrizio Ramoino (@Fabrizio_Ramoino) is often well informed.
@oana_hogoiu do you now who should be contacted?

By the way. I have to correct myself.

The DEM used is Planet DEM

PlanetDEM is not used anymore for the provided S2A data. Now the Copernicus DEM@90m is used.

These are the related tiles:

Thank you for the correction about the DEM and providing the tiles. Unfortunately, it appears Sen2Cor v2.9 only accepts the SRTM tiles. I tried the following

I received the following error message:

Context at this stage

@umwilm, @Fabrizio_Ramoino, @oana_hogoiu may I please get your opinions/thoughts on this? It appears the only workaround I currently have is to merge the DEM tiles myself and create a faux-zip folder for each tile, as that is what Sen2Cor is looking for.

This image is the difference of my L2A raster (merged DEM + ESACCI) and the directly-downloaded Copernicus L2A. 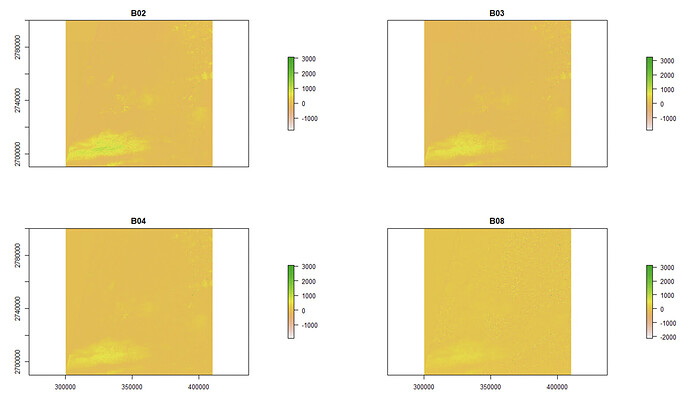 However, there are still outstanding issues

Hi @ABraun and @Jan, I was wondering if either of you would have insight into this issue? I was looking up this thread about using a recent sen2cor and saw you both were knowledgeable about the process.

Hello Ian @mcgregorian1
I shall raise your concerns to the L2A expertise.

I note that the SUM for the latest version of Sen2Cor (2.9.0) at http://step.esa.int/thirdparties/sen2cor/2.9.0/docs/S2-PDGS-MPC-L2A-SUM-V2.9.0.pdf says that “The Planet DEM is not downloadable for free and must be purchased.” So - to me - it makes sense that it will look for SRTM data by default.

I also note that the CGIAR website has been shuffled around, and the SRTM Tiles are now accessible via: https://srtm.csi.cgiar.org/srtmdata/

Hi @Jan thank you for your response.

Yes, I saw that as well regarding the Planet DEM. However, @marpet mentioned in this thread that S2A data is provided from the Copernicus DEM 90m. Possibly sen2cor could instead look for a base DEM folder, then based on an argument called DEM_Type the algorithm could look for either the SRTM file structure or the Copernicus file structure?

Thank you for the SRTM tile source. I was also using this site to help identify the tiles as it has an underlying map on it.