Hi there is there any indication in the metadata of each image of Sentinel 1 that can give me an idea of the quality of the data. I have some very dark images, which I was wondering if the quality is good enough to use or not. How should I get that?
Thanks for your reply in advance

SAR backscatter is always dependent from various components, including sensor-specific characteristics (temperature, position,…), geometry (incidence and look angle) and atmospheric conditions (clouds still have a small impact).
If one image is different / darker than the others, you can

And, of course, you have to adjust the color scale of all images to the same range. Some outliers in single images could stretch the whole range which may cause the whole image to look darker than it is.

Thanks for your reply I already removed the thermal noise, so there is not a problem in this way. But what is antenna pattern removal ? I zoomed in th image and a part of my image i see an almost vertical white line which seems like a noise in it, which is very thin though. I already did Thermal noise removal, apply orbit file, radiometric terrian flattening and range doppler terrain correction on my data. And I wanted to do your suggestion in antenna pattern removal right now, but it gives error below. Any idea you might have on how to resolve this? And do you think Sigma 0 can solve this problem and why? 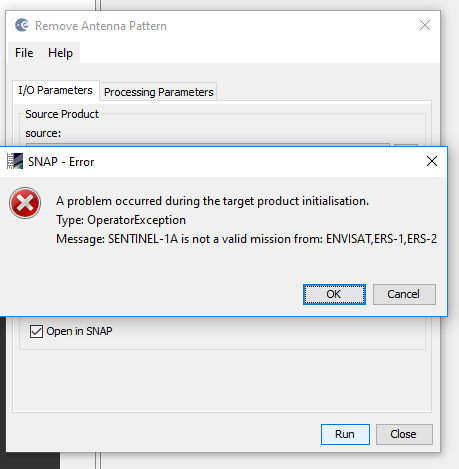 sorry, I mixed it up. Antenna patterns are already corrected in most Sentinel-1 products. So you can skip this step.

What about the histograms/statistics of the images - do they differ or is your reported “darkness” a visual issue only?

So I can say that for a very good image the range is about 0 to 5.46 and for this dark image it is about 0 to 7.24 in EW. in IW I have VV images with 0 to about 25! Most of the problems are with IW ones and most of (but not all of ) EW ones are somehow better. So I don’t think it is OK to do histogram matching for radar images. But I was wondering if I can have something as a value in the metadata to figure out about the quality of the image. the image below is a screenshot of images all from the same area and they are in order by date and you see some images are totally dark that are not the same in their images before and after. I was wondering if I can know from something that if the quality has any problem or fix it. The second image shows a VV image whichis 0 to 25 I can hardly recognize a very dark and thick horizental strip at the middle of it, which sounds like artificial! Any hel and idea is really appreciated. 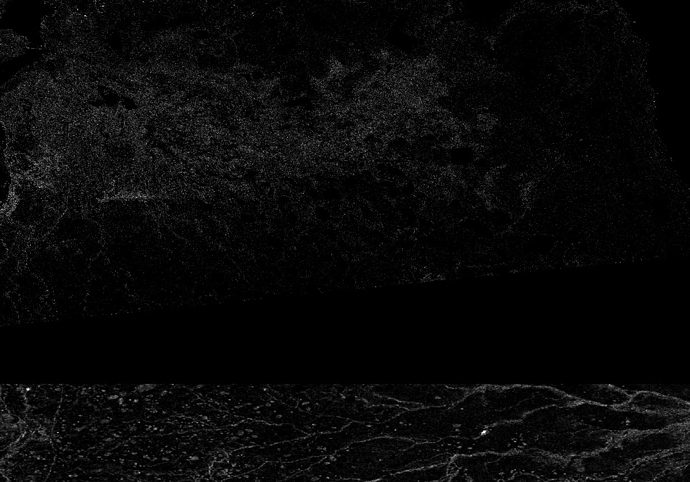 I have a similar probelm that you have mentioned, I have a stake of IW GRD images (radiometirc calibration and speckle filtering applied) for the same area covering a stream but the histogram or range of sigma nought values is slightly different from each other for each image. All I want is to make an algorithem which can extract only the water pixels based on a threshold value from all the images. But as the histograms are slightly different therefore I cannot apply a single threshold value for the detection of water.
Did you find any solution for the problem you have mentiond or do you have any thoughts to share?
I have applied histogram matching keeping 1 image as Reference and got a partial success i.e. the histogram has matched but there are certain empty bins and by comparison I suspect that the most accurate threshold lies somewhere near the empty bin so actually the accurate value is missing in the matched histogram. I attached a figure for 2 images as an initial point. 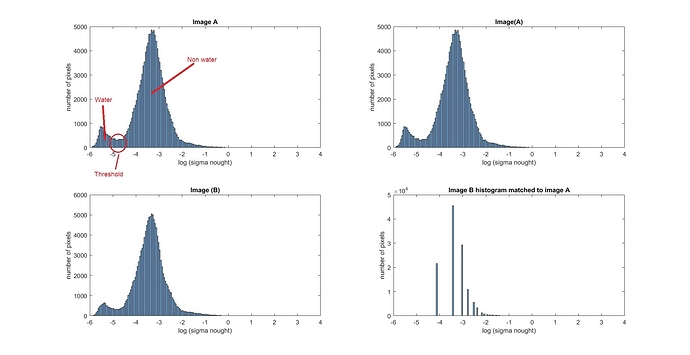 Are the values you quote Sigma0 in dB? Overall darkness of the image does not mean that there’s a problem with image quality, it just implies that the backscatter is extremely low and close to the noise-floor of the instrument. This happens with extremely smooth surfaces like very new thin ice or totally still water-surfaces.

If you have a completely dark band crossing your scene that could be a problem with that particular product.

I’m assessing some images from over the Mississippi delta in the Gulf of Mexico, and a lot of them seem to have this chipped parts. At first I thought it might be just a visualization problem, but the quicklooks look the same and it is specific to some acquisitions only.
The orbit number is 165 and the cut seems to be going from 2015 to feb 2017. 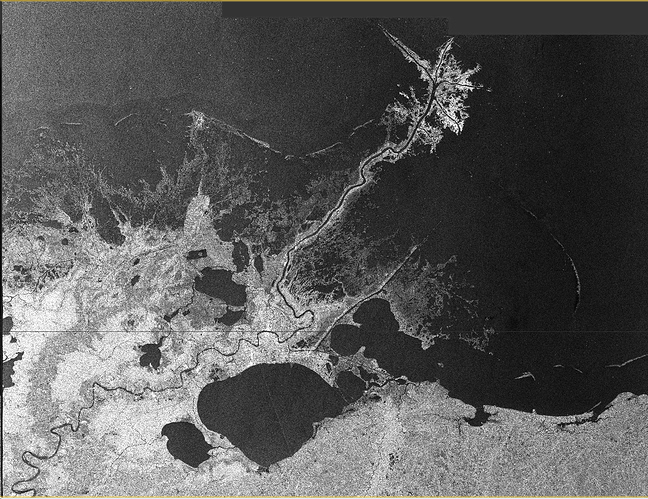 are these lines within one image or is your example a mosaic? In case of the latter - how did you create the mosaic?

it seems to be normal behaviour of the TOPSAR acquisition mode.
My suggestion is to assemble with the image that covers the part of the area ‘missing’ in the acquisition you show.

I hope this help
Cheers

I’ll look into it. It was one of the possibilities.
Thank you, Jose

Hi, the blocks of’missing data at the top of your image are due to the way that S1 IW data is acquired. As explained in Section 3.3.2 of the Sentinel-1 Product Definition document (https://sentinel.esa.int/documents/247904/1877131/Sentinel-1-Product-Definition), IW image are composed of three sub-swaths which are, in the case of GRD product, merged together to form the final image.

In azimuth, data is acquired in bursts of about 20km in the azimuth direction with the bursts being at different azimuth locations for each sub-swath. For products at the start or end of an imaging sequence (the time between the SAR being switched on and off) there will not be complete bursts and hence the missing data.

I was debating today with my colleagues if that could be the problem. I have taken the suggestion from Jose and looked for the covering scene in the next acquisition, except there is no next acquisition, which led to the fact that this one may be the last and maybe it is the switch off. Also because scenes after February 2017 for the same orbit seem to cover a slightly different area and do not show this lack of data anymore.

Thanks for the suggestion

except there is no next acquisition

Had you check whether could be a change of acquisition mode? As it was on the sea, maybe instead of IW it is EW.
This is just a guess, but can be wrong.
Can you check that?