Hello, everyone. I downloaded the SNAP several days ago and i performed Sentinel-1 data DInSAR on it, but i have never made it (

so sad emmm…). Then I was informed of an update by the software , so I tried it . Unluckily, it failed again and again.
I wonder if anybody would give me some tips about it. thanks!

Do you get an error message about the update?

What is the problem with the DInSAR work? Please specify “I have never made it”, otherwise we cannot help you solve it.

Here is my interferogram produed from two S-1 SLC data which are used to create a DEM .I am a beginer of SNAP and maybe these two SLC are not suitable for DInSAR. I followed the procedures of DInSAR of SNAP, but as you see, I got an pure purple interferogram. As for the failing update, my software gave a message that “Unable to Conect to the Update Center”.
QQ截图20191214180521.bmp (3.7 MB)

the products seem alright, but the stacking failed. Did you use BackGeocoding? Try to select SRTM 1 (AutoDownload) and check if the coregistration was successful as described in this post: Fault marking by InSAR Data and difference between SLC_1SSV and SLC_1SDV? If you only see one image (red or green), the coregistration failed.

maybe you stop the graph after stack to see if the DEM is the source of the error. This cannot be reconstructed after the interferogram generation.

About your second question:

Thank you for your reply, Mr ABraun. I will try it again.

Well, I think you are an expert of SAR and quite firmiliar with Sentinel-1. I have a problem recently that how could I choose two SLC images which cover the same region on the copernicus website map. The shootscreen below is my study area and as you can see, these two images don’t overlap completely. 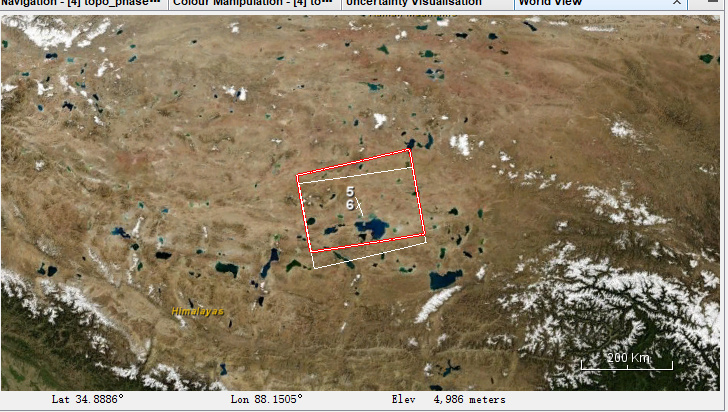 this is not a problem. As long as the two images belong to the same track (they are aligned on their eastern and western border), you can use them for Interferometry.
Of course, you can only use the area contained by both images, but you can use the TOPS Split tool to remove the first/last burst of each corresponding product to continue only with the common coverage.

More importantly for the selection of images is the perpendicular and temporal baseline, depending on what you want to analyze.