After Sen2cor atmospheric correction some bands are missing

can anyone tell me the reason that why after doing the atmospheric correction of sentinel-2 data using Sen2cor band-8 (842nm) and band-10(1375nm) are vanished though these two are very important for further analysis ??? why is it so and what is the remedy ???﻿ plz help me…
Thank you.

Did you select any output resolution?

atmospheric correction provides bottom-of-atmosphere (or: surface) reflectances. band10, the “cirrus” band, is what is sometimes also called an atmospheric or sounder band. The atmosphere in this spectral region is optically opaque, ie the sensor does not receive signals from the surface but only from the atmosphere itself, hence no surface signal can be inferred.

I am bit confused about which resolution will I select that is why I selected “All” option. Can u guide me about the parameters ? like which resolution should I take, what is the meaning of watermask 0,1,2 etc ???

Where are you looking at?

If you open the product in SNAP (via the MTD*.xml file), you should have all bands (incl. band10, actually) in the Bands list.

For reasons to this as well as for the meaning of the masks see the Sen2Cor user guide (available via here) and documentation referred therein.

I am opening these files in SNAP only with the .xml file. I have attached two pics of before and after sen2cor correction. plz have a look 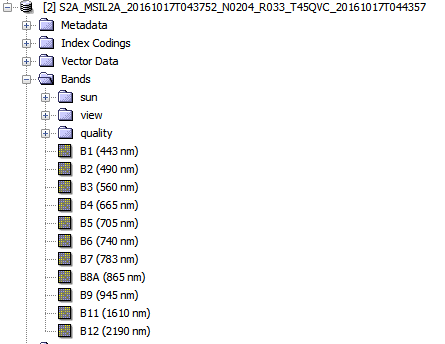 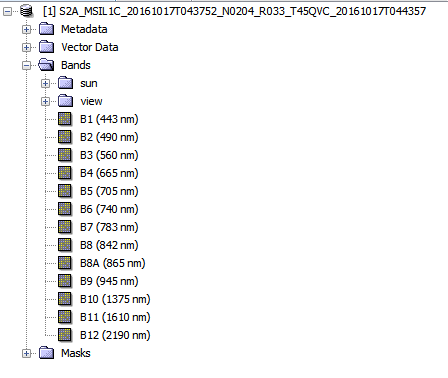 After correction inside the Granule and image data folder two folders has generated, namely, R20m and R60m. no folder generated like R10m. inside R20m folder 11 band are there except band 1, 8 and 10… where as inside the folder R60 there are 13 bands except band 8 and 10

First, I have to admit I looked at the wrong data in SNAP before. There is no B10 data in the L2A Bands list.

Maybe something went wrong during the processing? Did you keep the error window output (probably re-run) - If you chose resolution ‘all’ (leaving all other params at default, I guess?) and there is no R10m folder, I suspect the processing was finished prematurely for whatever reasons.

Unfortunately I don’t know another way to check what happened afterwards except re-running the case. Or is there a log file with the processing window output somewhere (or an option to redirect that into a file? particularly when running from SNAP)