I used to deal with radar data long ago (2006-2007) and it was for other purposes. Since then much happened.

I’m trying to make a deformation map or any kind of map that a landslide can be identified and shown. For later I would like to make an evolution map for the displacements of the landslides. For starters I downloaded some ALOS-1/PALSAR Level 1.1 FBD (HH and HV) and FBS (HH), same ascending track and different relative orbits, imagery from SSARA/UNAVCO for testing purposes and to get familiarized with SNAP and Radar data again. I read much of the content, tutorials and the forum here.

One of the 1st steps is to DSk the images as I read it here on the Forum. And I did that for all the FBD imagery first. Then I proceeded with one pair coregistration to perform a test. But the results ended up black and I was unable to go further! I wonder if this works if I subset the bands to select the co-pol images HH prior to the coreg step or it is some problem with my images or else. The temporal baseline is roughly 30 days for the selected pair.

I also read it here that it’s best to make everything, in terms of InSAR- DInSAR, prior to subsetting the scene to my coordinates.

Any help? I guess there’s no graph made for this use of ALOS imagery?

Ok, I just updated the Snap do version 5.0.5 and the Stack came out nice.

Anyway, to summarize the steps:

As you can only use one polarization for interferometry, at a time, you can run the band-select operator to reduce the dual-polarized data also HH. Maybe the pattern of the HV-band somehow disturbs the coregistration process.

Another thing to try would be Deskewing after Coregistration.

Another thing to try would be Deskewing after Coregistration.

works good for me with ALOS-1 data from ASF/SSARA (note that ALOS-1 data provided by ESA doesn’t need Deskewing). 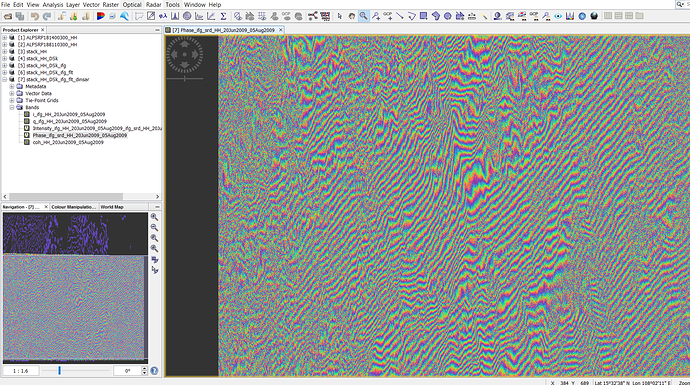 The violet patterns in the Navigation window are areas with no common coverage.

Thank you for the reply @ABraun.

I’ll try as you said!

And then the next steps to make a deformation map!
I’m still selecting the pairs with small temporal baseline… And will compare with a stack of all images found (2007-2011) using the tool withim SNAP

Nice image by the way!
I’ll let know if I succeed!

Following those above mentioned steps I got an error when generating the differential interferogram. 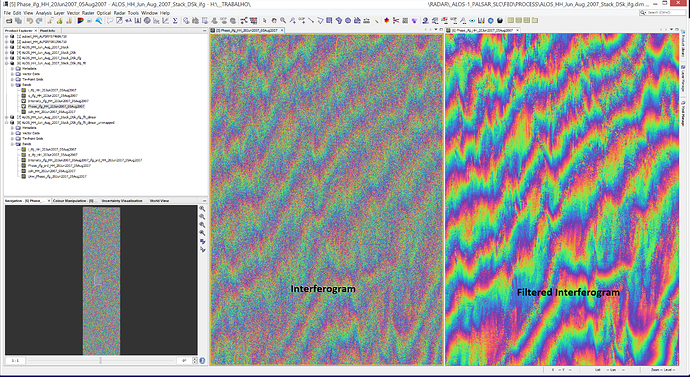 This is the interferogram and the filtered one. 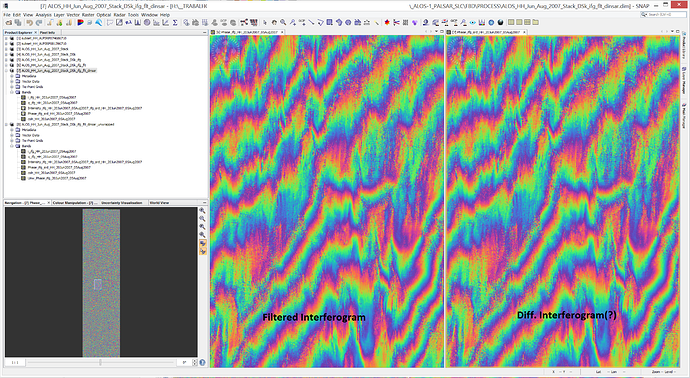 And here the filtered compared to the DInSAR.

I guess this happened because the DEM wasn’t subtracted? I’ll try again… Since after all this my unwrapped image show weird patterns (bellow). Used DEFO and MCF as parameters for SNAPHU export. 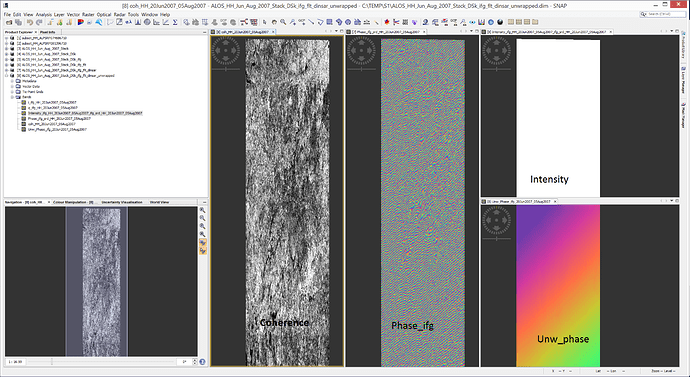 all fringes in your interferogram range from left to right. Consequently, the unwrapping produces a strong ramp from north to south.
I don’t know the exact reasons for that, but your interferogram shouldn’t show this strong trend.