Artifacts in Sentinel-1 GRD data. How to detect/filter?

We have several S1 Scenes that show strange artifacts. One example is 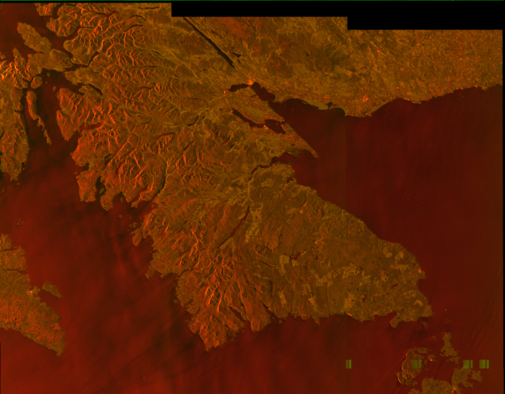 The artefacts on the lower right of the image introduce wrong values in our model parameters so we must remove them before calculation.
I’ve checked the metadata included in the file but did not find a flag that would help me to detect such scenes. It seems that several error flags are also set to True in scenes that look perfectly normal.

Are there any plans for the S-1 Toolbox to offer help with the identification of these faulty scenes?

Those artefacts are Radio Frequency Interference (RFI), usually caused by other radars (maritime, military etc.). There are currently no plans to include a detector for spotting such interference, but if a robust algorithm for doing it exists it could certainly be considered for SNAP.

The feature you see in the lower right of the image (green blocks) is caused by interference from the ground (Radio Frequency Interference or RFI) - i.e. there is a radio source on the ground transmitting on the same frequency as S-1A and S-1B. Unfortunately the SAR processor is not able to remove RFI.

Thank you both for the clarification. @peter.meadows Is flagging a whole scene for RFI a possibility if removal of specific RFI affected pixels is not?

The issue of RFI is being considered by the S1 QC team - at the moment RFI is identified only by a visual inspection of quick-look images. For some users, RFI isn’t a problem unless it is directly over their area of interest. I’ll pass you comments onto the QL team.

Thank you. For us any kind of automatic flagging/removal of such scenes would be very helpful since we are currently setting up a NRT processing chain over Europe. So manual inspection is not really an option.