Averaging of many interferograms

Hi all. I am looking at a landslide in the southern French Alps and I have a number of interferograms that have been processed using the S1 TOPS Interferometry tutorial steps. These interferograms each have a temporal baseline of 12 days. I would now like to average the interferograms by meteorological season (excluding winter to avoid the negative effects of snow) in order to extract seasonal surface displacement signal as well as cancel out some of the atmospheric artefacts . I know there is a ‘Band Maths’ operator however I cannot figure out how to use this on many interferograms (for me, this is only working for pairs of interferograms).

Can anybody recommend a procedure to average many interferograms in this way? Furthermore, is averaging best performed in SNAP while the interferograms are wrapped, or better to wait until after phase unwrapping (which I have been doing on GAMMA)?

I once opened a topic but the main question remained open.

I would also be interested in this topic and could nowhere find a solution. I guess it is so easy that nobody else has to ask.

do you think, terrain-correcting all unwrapped interferograms and then stacking makes sense?
I haven’t tried but co-registering them didn’t work. And maybe the Phase to elevation operator needs products in slant geometry…

Unfortunatly I am not an InSAR expert. I am almost an absolut beginner in SAR processing.

no problem - it was rather a question at all

Abraun, I would have thought so. If the stacked interferograms were of precisely the same pixel dimensions and were accurately co-registered I would have thought that it would be fairly simple to do a sort of raster averaging operation after the terrain correction (which as I understand it yields square pixels). Maybe the facility to do this averaging doesn’t exist on SNAP, but I know these types of raster calculations are possible on ArcGIS and Matlab. I just don’t know to what degree such an operation would introduce errors into the output ‘averaged’ interferogram.

To correct myself, I know that the ‘Band Maths’ operator exists on SNAP but this only seems to work for operations on a couple of input interferograms rather than a larger stack of say five or more.

anyone already tried this? 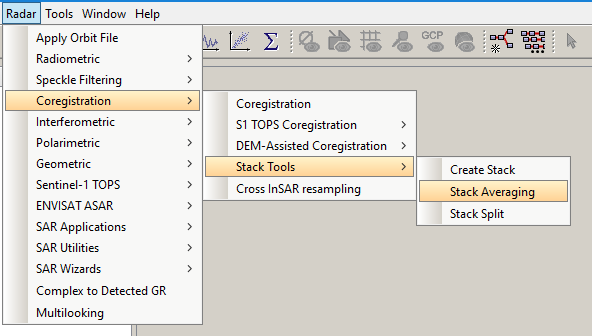 I have time now to do so, but let me ask you did you get any results from this atttempts?

didn’t try it yet, but I am planning to do in the nearer future. I’ll post here when I have news.

Ok thank you so much I’m trying as well I’ll post in the same place.