Any advice on this?

Coregistration only works on data from the same track, especially when data has high spatial resolution. Different viewing directions and incidence angles can introduce shifts which exceed the capabilities of coregistration approaches.

You could pre-process (calibrate, terrain correct) all data and then create a stack (or re-try coregistration with “product geolocation” as initial offset method instead of orbit).

for InSAR you skip the calbration. Terrain Correction should be applied as a last step.

I have a question about the Terrain Correction process.
I did the following:

Here is the area under concern: 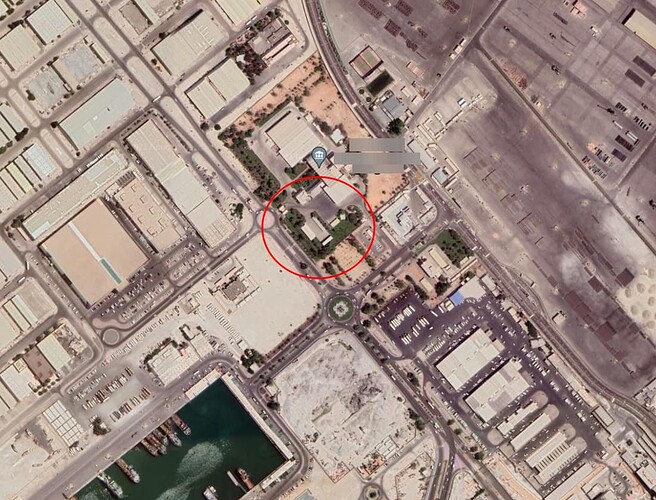 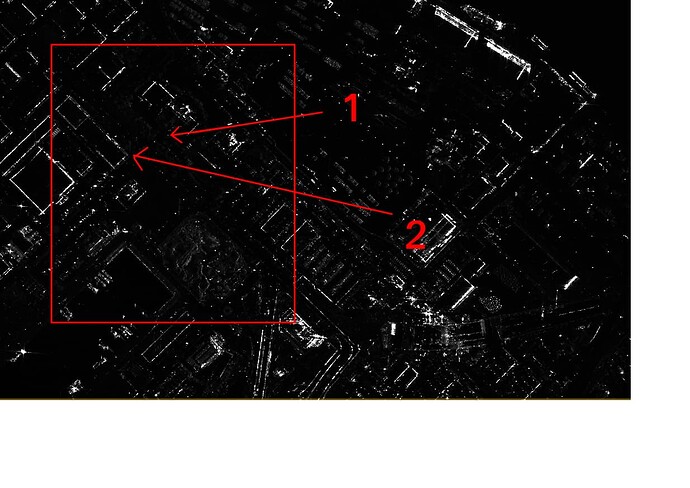 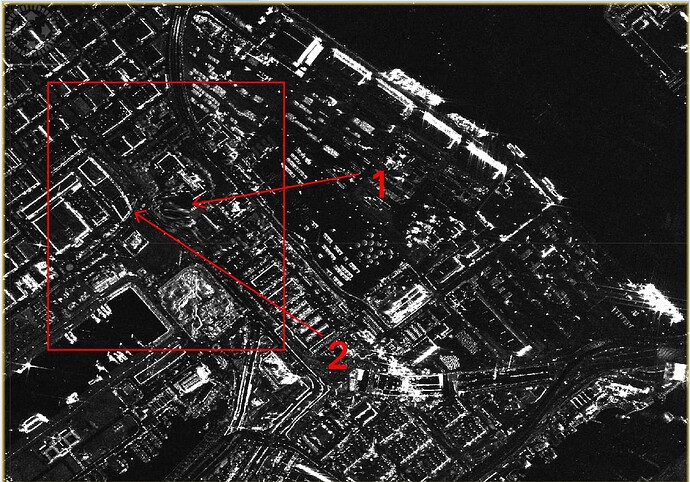 As you can see, there are two problems:

Maybe you can first share your data and aims. Calibration and coregistration are mutually exclusive in some cases.

Maybe you can clarify your questions based on these points. I feel that your understanding might base on some false assumptions.

Thank you for the taking the time and writing all these.

I have 5 spotlight images from the end of August 2021 taken by the Iceye SAR constellation. I obviously can’t share the data since it is very expensive.
My goal is to run ACD on this set of images, that’s why I need to do coregistration.

So my questions are basically - what happened that Iceye guides to do these stages?

Check that the DEM is flat too.

I wrote that calibration, multilooking and terrain correction are essential since this is what written in the Iceye-Snap tutorial - ICEYE SAR Data in SNAP, under ICEYE SLC DATA PRE-PROCESSING.

Sorry, this was not clear from your initial post. So in your case calibrating makes sense because you want to compare intensities of different dates. Calibration makes sure that the differences caused by the sensor are kept as small as possible. If you ask me, it should be applied for every multi-temporal approach, regardless of the sensor (unless you want to perform interferometric analyses which primarily use the phase instead of the amplitude information).

Multi-Looking is not mandatory. It helps to get better image quality, but at the cost of reduced resolution. So it depends on how much loss of spatial detail you can accept in your data.

The same for terrain correction, it is not part of the sentinel PS pipeline as described a lot in this forum, for example.

The reason is that the Sentinel-1 PS pipeline looks at the changes in the phase, not primarily in the amplitude. PS cannot be compared to APC, therefore the pre-processing is different. For example, the final geocoding is done in Matlab and therefore not part of the PS preparation in SNAP.

If all your ICEYE images are acquired from the same track (I would consider this a prerequesite of multi-temporal amplitude change detection over urban areas), you can use the “common” coregistration module and use the “orbit” as initial offset method. The DEM-based coregistration is an alternative but I would not recommend it for VHR SAR data unless you have a VHR DEM as well.

The quality of terrain correction applies on the quality of the DEM, as @mengdahl said. You can select “DEM” as an additional output to check if there are variations in the DEM data. Which DEM did you use by the way?

Bingo.
Look at this: 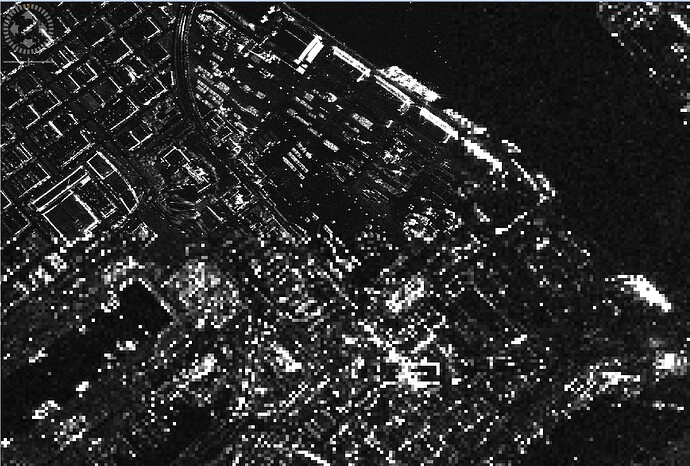 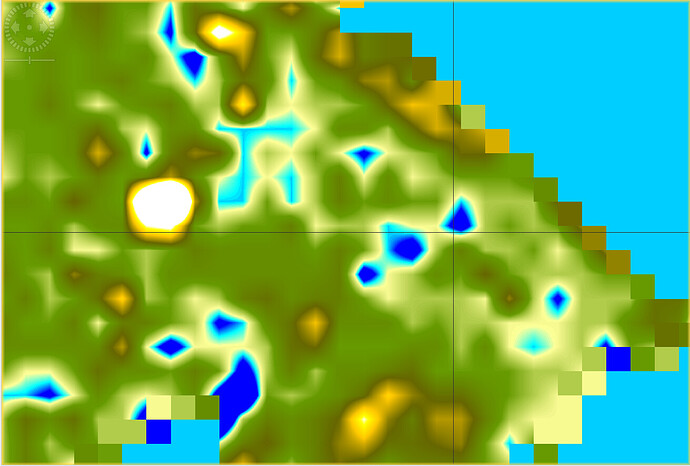 There is a bright area in the DEM (elevation) layer.
So, it raises two questions:

What is this bright area? is that a missing area in the DEM?

could have many reasons. The DEM is upsampled to the spatial resolution of the SAR data this can also often introduce weird patterns. It also depends on the origin of the DEM and if it contains surface heights or not. So maybe comparing different input DEMs and their impact on the terrain correction result could help to avoid “false” geometric corrections.

DEM-based coregistration follows a different principle. A DEM is used to simulate the variations in backscatter intensity purely based on topographic variations (e.g. hills, which are barely present in your area) and uses these to overlay the DEM and all input radar images. But as the spatial resolutions of the DEM and the ICEYE images is too different, I see no benefit.
In contrast, the Range Doppler Terrain Correciton uses the DEM to shift each pixel at its exact location a the Earth’s surface based on the height information from the DEM. This potentially introduces more errors than observed in the coregistration because in the latter all non-matching areas are ignored.

DEM-assisted co-registration is for pair with large height differences and long baselines. It does not make any sense to use it in flat cases. I notice the help does not explain this or give references. (@jun_lu please note. )

In addition it looks like your chosen DEM is of low quality, probably one of the global altimeter DEMs. Try the lightyears better Copernicus 30m one for terrain correction instead.

Multi-Looking is not mandatory. It helps to get better image quality, but at the cost of reduced resolution.

If you lose resolution, in what way is the quality gets better?

The reason is that the Sentinel-1 PS pipeline looks at the changes in the phase, not primarily in the amplitude. PS cannot be compared to APC, therefore the pre-processing is different. For example, the final geocoding is done in Matlab and therefore not part of the PS preparation in SNAP.

If all your ICEYE images are acquired from the same track, you can use the “common” coregistration module and use the “orbit” as initial offset method.

Here is the tracks list, what do you think about it?

Which DEM did you use by the way?

I used the SRTM 3Sec data.

If you lose resolution, in what way is the quality gets better?

Speckle effects are reduced, you get more homogenous areas.

only at the end of the processing, for example when you converted your phase to displacement, then you terrain correct the displacement raster as a last step.

It is not called terrain correction, but the location of the persistent scatterers is estimated within the process.

Here is the tracks list, what do you think about it?

looks like your data is acquired from different tracks (= different look direcitons and different angles). Can you please show their footprints on the World View tab?

Any building will look different in every image, because in one you might see the right wall and in the other you see the left wall. ACD will falsely detect this as change, but it’s just the result of different angles.

I used the SRTM 3Sec data.

This has 90 m of spatial resolution, please try the Copernicus 30m DEM for a comparison.

Can you please show their footprints on the World View tab?

The background image is not loading, it’s a common problem… never ending “downloading”. Anyway, you can see the footprints: 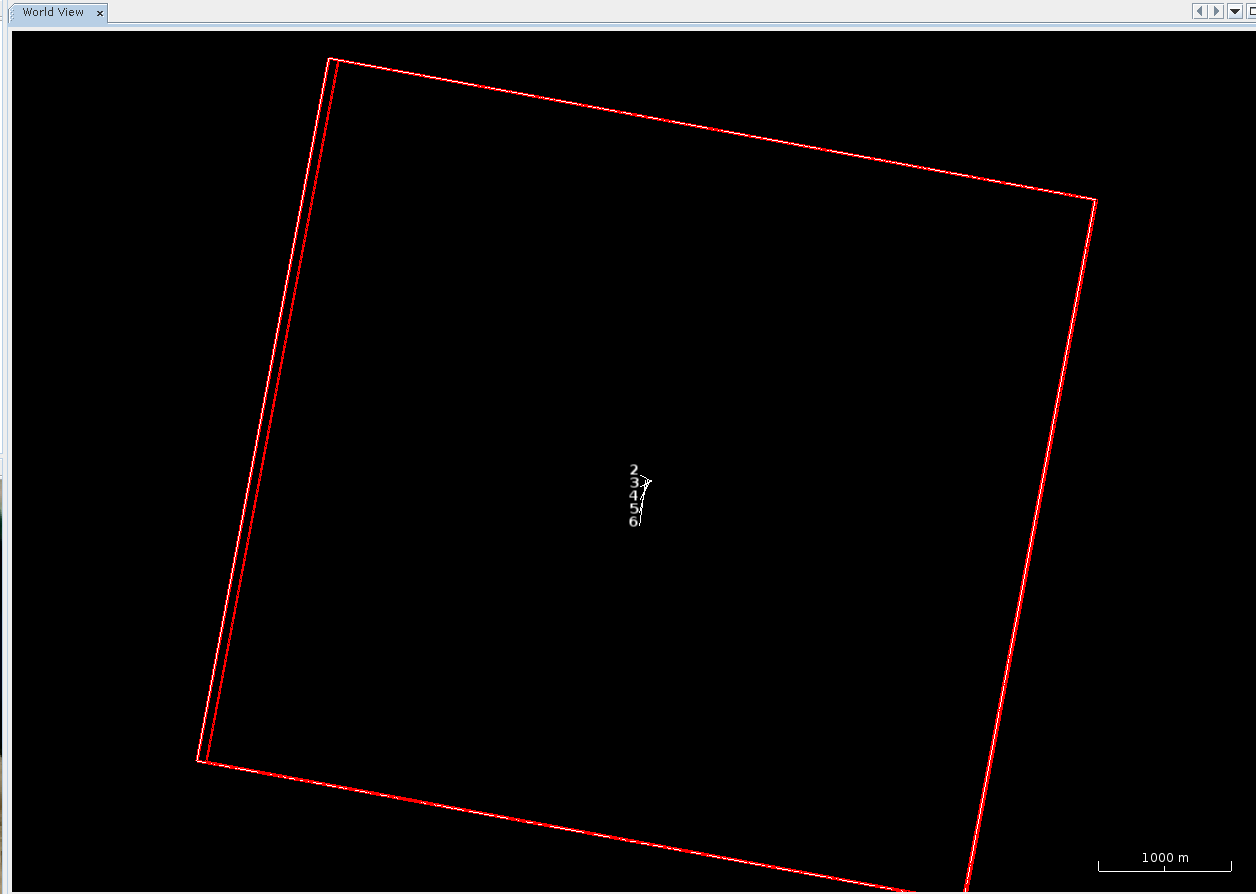 I’ll let you know what happened when I used the Copernicus 30m DEM for terrain correction.

oh, so all are of the same track, that’s good. You can forget about what I said about different look directions, it does not apply in your case.

Even though the track numbers are different?

OK, so the Copernicus 30m DEM does not cause a blur in that area, and the distortion is less, but now there is distortion in other places, like the building in the upper right area next to the ship. 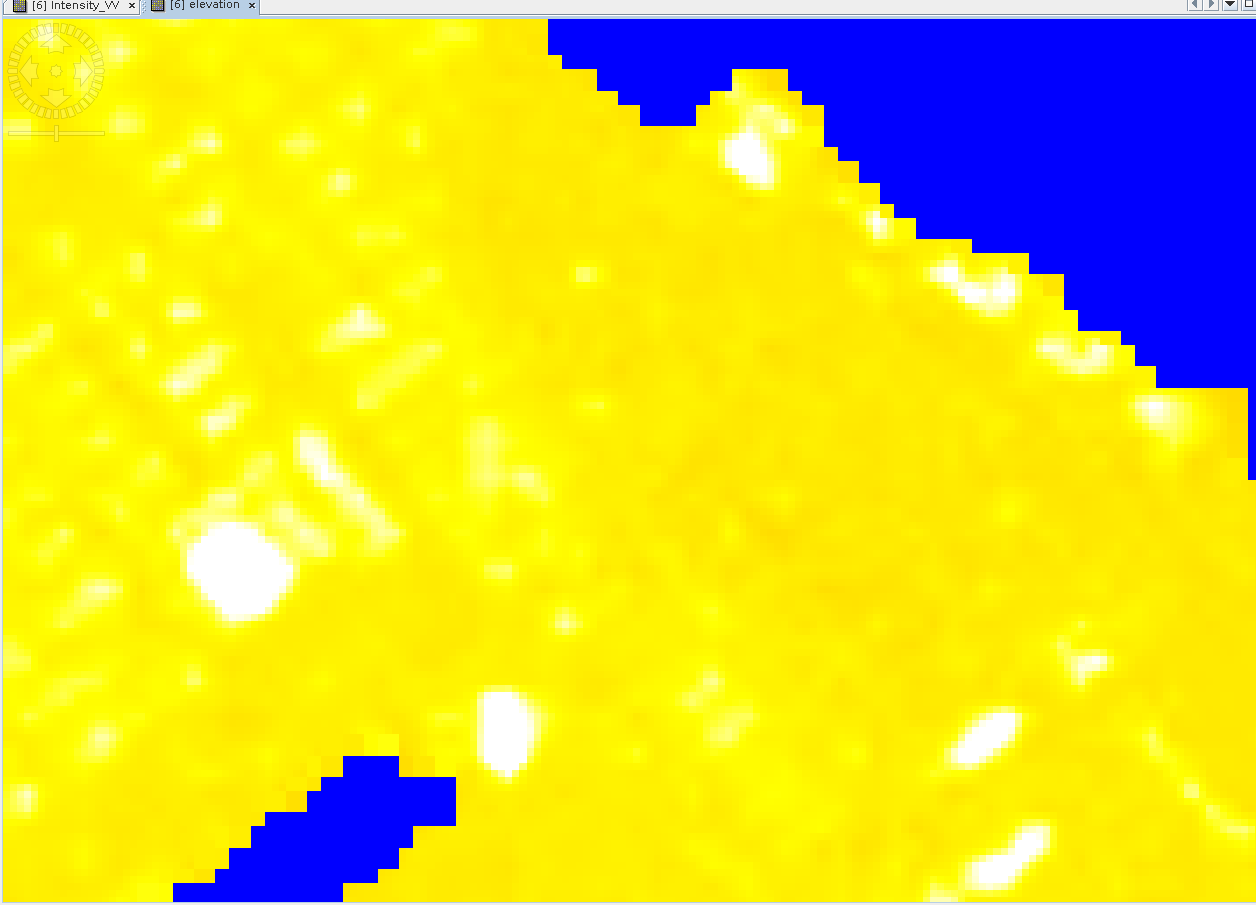 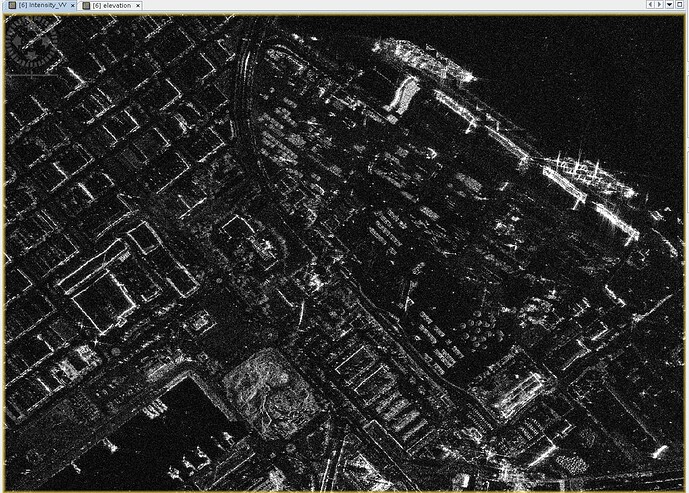 So the question is - do I need to terrain correct in my situation? flat area, no need for phase content.
(In the future I might apply CCD, which needs the phase data. Would terrain correction be critical then?)

as an alternative, you can apply Ellipsoid correction. It would not introduce distortions but the locations of the changes would have to be interpreted with care. Depends on if you want to overlay these data with other data (e.g. shapefiles of buildings)