The C2RCC can output Rrs( Remote Sensing Reflectances) and Rhown( Normalized Water Leaving Reflectances). In Ocean Optics Web Book the Rhown=PI*Rrs, but the result of the C2RCC is not so. 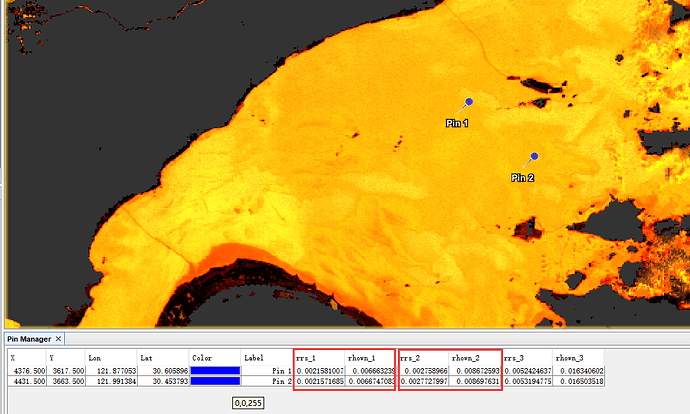 Can you answer my confusion?

Actually the factor PI is between rrs and rhow.
The rhown is the normalised rhow and that’s why it is not exactly PI, but close.
You have to decide if you want the rrs or the rhow values. There is an option for it.

I carried out the experiment by C2RCC. I find the ratio of Rrs to Rhow of the C2RCC output is PI. But I still have doubts. Some paper said the Rhow=PIRrs, others said the Rhown=PIRrs，Which one should I believe?
Additionally，What is relationship between Rhow and Rhown in C2RCC? 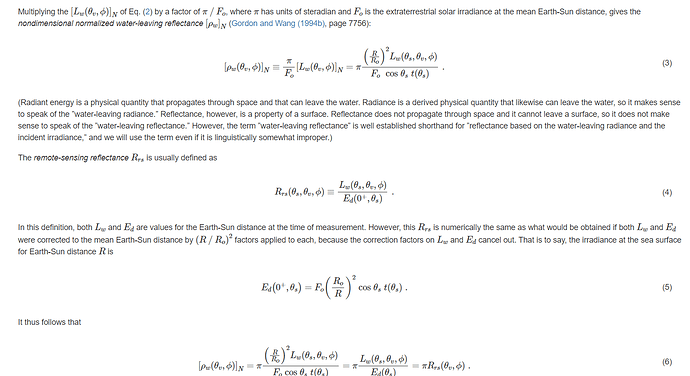 The ratio between rhown and rrs is almost PI for C2RCC. Considering they are calculated independently it is pretty close.

Maybe you want to have a look at the ATBDs I referenced just the other day.

The ATBD for MERIS 4th reprocessing is linked in the help. [image] The ATBD for OLCI will also be linked in the next release. You can access it already here: And this is the direct link to the MERIS ATBD. The bio-optical model didn’t really change and is actually also the same for Sentinel-2 data.


Especially in the ATBD for MERIS the normalisation is explained.
zhaohaiyanggit September 3, 2020, 10:41am #5

Thanks for your reply. The ATBD you recommend will help me a lot.