I am trying to co-register data that I am extracting from the Copernicus scihub, but I have not been successful for the simple reason that it seems the I have to first add geolocation to the chosen products so that they have the same coordinate system. Does anybody know how I can do this because I could not find a single decent documentation that explains how to accomplish this? And is there any formal documentation regarding SNAP, the use of geolocation and co-registration?

what kind of products do you want to coregister and why do you think geolocation has to be added?
Sounds quite complicated and maybe there is an easier way of doing it.

Thank you! Your solution did the trick as collocation is the feature that is utilised in SNAP to perform image registration.

Dear @abruescas, do oyu by any chance know what is the difference between collocation and coregistration in SNAP? Which one of these functions is actually performing image registration between two products?

let me try to summarize it:

Please, anyone feel free to comment if I missed an important point.

1 Like
Image Fusion Using Sentinel 1 and Sentinel 2
How to add a band to another folder
S1 TOPSAR Interferometry on S1TBX - Further improving interferogram coherence
charlesbrincat April 9, 2019, 8:54am #8

@ABraun So in the third case, they won’t even be geocoded in the same manner? Do you have any tutorial which could kindly assist me in using the coregistration in snap correctly?

it depends a bit on the type of coregistration which is applied. The classic coregistration in SNAP takes data in slant range geometry as long as it has a similar looking angle (it cannot coregister ascending and descending pass radar images).

So it depends on the kind of data a bit which one is the most suitable. This is why I asked in my first answer.

Some are explained for different applications of Sentinel-1 but it is a special case because of the TOPS mode.All the following include coregistration:

@ABraun your answer is brilliant and invaluable to this community. Should give me a good head start. Right now I am trying to perform image registration between different satellite images as I am currently doing an MSC by research to try and improve image alignment performed by SNAP. I am first starting off with the same kind of satellite images such as Sentinel-1 data. Could the SNAP coregistration feature also be used for other satellite images other than sentinel-1 data? Say combine Landsat-8 to Sentinel-3 data?

Could the SNAP coregistration feature also be used for other satellite images other than sentinel-1 data? Say combine Landsat-8 to Sentinel-3 data?

I have doubts because of the large difference in spatial resolution.
Maybe the new coregistration is interesting to you in this context: GeFolki coregistration

I recently face up this problem, of can’t create databuffer, I surfed all the topics mentioned in here,

But I didn’t find solution, I tried up to create stack of the following layers, all of them are T.C. and they have EPSG:4326, the RAM of the machine is 16 GB, I increased the cache to 8000, firstly I have this warning, and the processing starting normally after 7% I got the error of cannot create data buffer, Any suggestions. 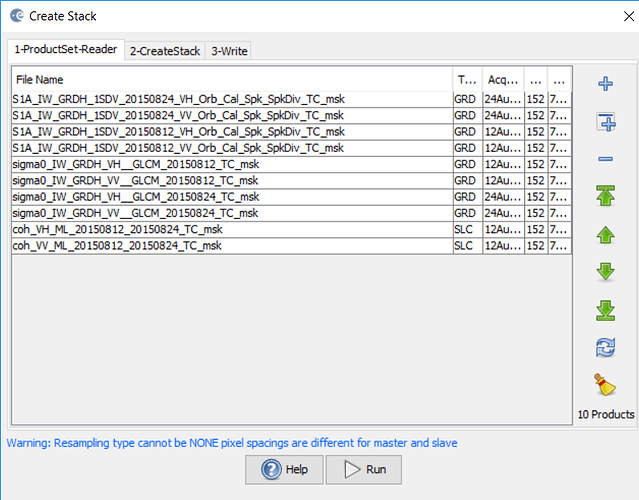 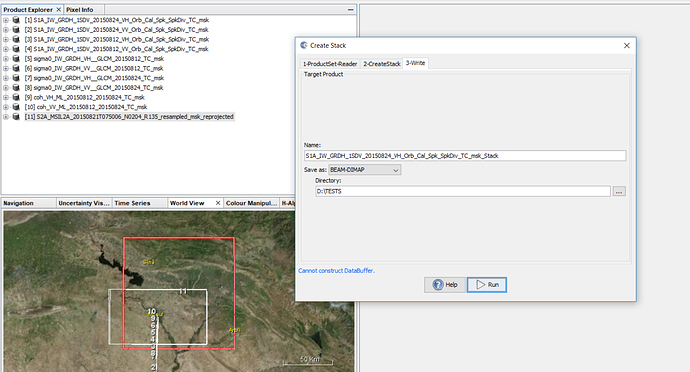 hmm, what kind of resampling did you select? I cannot imagine another process involved which requires a lot of memory.

In SNAP7 multi-product collocation will be possible, maybe this is an alternative then.

S2 image is resampled to 10 meter, and then reprojected to WGS84 , EPSG:4326,
The STACK is the first step of PCA, and then the RF_classification,

In SNAP7 multi-product collocation will be possible, maybe this is an alternative then.

First question, When will be the final release?

Secondly, Do you mean multiple collocation could be applied instead of stacking towards PCA and RF_C?

I don’t know the exact date but it is supposed within the next days: SNAP 7.0 public beta nearing release

According to the release notes

many inputs will be featured so you can stack terrain corrected products (e.g. PCA and classification outcomes)