The common steps for the generation of an (Differential) interferogram are :

In this last step, it is possible to output the coherence (which is the default option).

You know that single-look interferograms are somewhat noisy and a multilook and/or phase filtering is not mandatory but strongly advised before the unwrapping. The improvement in the phase pattern is largely significant, looking at the fringe pattern. Authors studied the improvement in the coherence after multilooking / filtering. 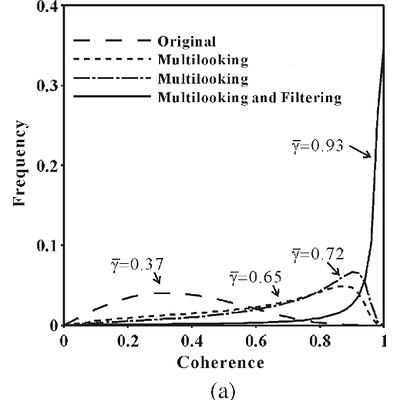 It would be a great addition to let the user recompute a post processed interferogram.

What would be the use of the recomputed coherence? A heavily filtered phase has less to do with the stability of scattering in the InSAR-pair and more to do with performance of the used noise-filter.

What would be the use of the recomputed coherence?

When estimating the error on the phase for example.

Interferometric phase can be seen as a probabilistic value whose expectation got closer after multilooking/filtering. The phase error is a function of the number of looks (thus multilooking) but also coherence (thus goldstein phase filtering). 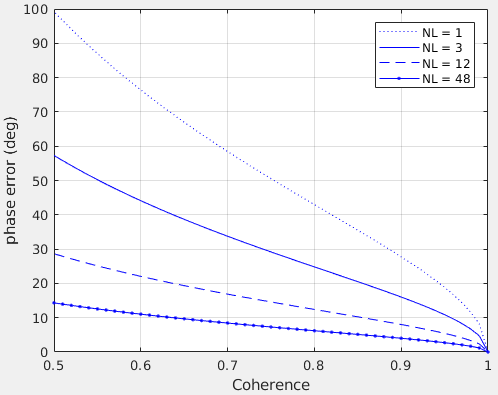 Estimating a displacement is one thing. Estimating its error is desired step further

Your use-case is not totally clear to me - what error exactly do you want to estimate? Does it have something to do with displacement?

Does it have something to do with displacement?

Exactly. When you estimate a displacement from the phase, you know that you don’t actually extract the “true” phase related to a displacement but something which is close, because of the phase variance.

This level of noise (magnitude of the phase standard deviation) is highly reduced when performing multilooking / phase filtering such as goldstein phase filtering. You are actually much closer to the true phase. This can be seen in the graph by the phase variance variance decreasing with multilooking and coherence. This is also translated in my first figure.

To be practical, you can put a theoretical value on a phase standard deviation when you know the coherence, which SNAP can not recompute now.