I’m starting to use the SNAP, following the tutorial at http://step.esa.int/main/doc/tutorials/sentinel-2-toolbox-tutorials/, but inside “Select RGB Image channels” window:

Regarding the question 1, I ve realized that I was opening the data project in a incorrect way, once I choose from native resolutions to resampled resolutions, I ve started to see a RGB image color profile.

But regarding the question 2, I am still confuse if should I accept the bands suggested at window, or if I should to use other bands as for each color channel.

you should use the bands suggested by the profile. This should give good RGB images.
If I remember correct it is
Blue=B2
Green=B3
Red=B4

I had the same problem with opening the file. I received maps in files with different formats (.xml, .gfs, .json and. .tiff) from PlanetScope 4-band and could open it in QGIS. Now I have to convert it into RGB and when opening the windows I can’t enter a RGB profile. There are no options.
I proceeded like this:

This is a bug (reported here) when no profile is available for a raster.
Actually, you can directly open the tiff in SNAP and select band3, band2 and band1 for red, green and blue to have a true color image. No need to convert it to an RGB in QGIS:

I actually tried to open the bands but I can’t (a warning pops up: failed to open image view java.lang…). I have three different tiff-files which are shown on the screenshot.

Strange. SNAP 7 will support Planet data at least and will be released within the next week. The Beta release is available for testing.

For SNAP 6: Have you tried saving it as a simple TIFF from QGIS and load it again?

The problem with the reading of the tiff files is an issue in SNAP 6 and also in the public 7-beta, but for the release it should be fixed. Still working on it. Solving it has more implications as first thought.

I was able to reproduce it with Planet data. As a work-around by now, I managed to get them in SNAP by opening them in QGIS and saving them again as a tif. Somehow the original structure is different than what is exported from QGIS.

Thank you very much for your answer. It is getting there. Now I have saved each of the six different layers as a tiff and could open it in SNAP (they where already a tiff). I anyway think that the colours don’t seem to be the right ones yet. It doesn’t look as a normal picture and they are 2 pictures with 3 “layers” each. I suppose I will have to build a mosaic. 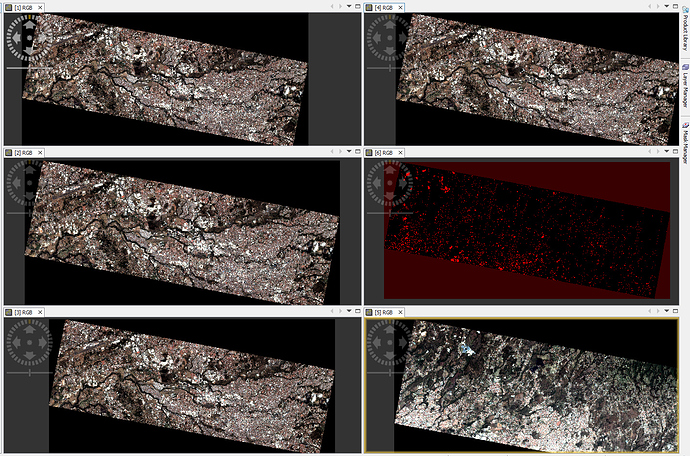 hard to say, but I think they are correct.

You can even make the mosaic in QGIS as virtual layer and then convert the final to TIF.

I finally achieved it with the your recommendations. The colours look eventhough the same as in the non mosaic one. Shouldn’t it look as a picture/screenshot from google earth but with better resolution?