Hello, I have been attempting to create a DTM for an aoi using Sentinel SAR data. My first attempt was somewhat successful using 2 SAR images from 7-1-2018 and 7-13-2018, however, there was some loss of coherence in vegetated areas that caused some areas to have unrealistic elevations (circled in red).

Does any one know any tricks I can try to improve my results in these locations?

I tried finding a data set with a shorter temporal baseline and tried processing that (S1A 7-25-2018, and S1B 7-21-2018). The problem was that even though the 2 images were both ascending orbit, the S1A and S1B images have a different orientation and after creating an interferogram with the S1A and S1B data I had funny looking results.

The coherence image below has some weird trend, I guess from the different orientation of the acquisitions… I know some people are using S1A and S1B data together, does anyone know how to do this? 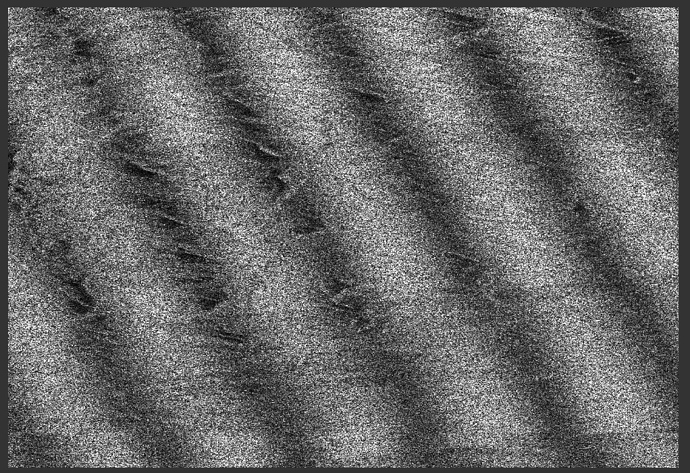 Thanks in advance,
MR

InSAR is generally of low quality over vegetated areas due to temporal decorrelation. You cannot do much about it.

That strange wave pattern in your coherence image suggests that your two images are not coregistered correctly. There should be no problem making interferograms between S1A and S1B scenes unless they are not from the same track. I don’t know what you mean when you say they “have a different orientation”, but perhaps that means they are from different tracks. The fact that the two images are separated by only 4 days instead of a multiple of 6 days also suggests they are from different tracks. You need to use scenes from the same track to do accurate InSAR.

Averaging multiple images won’t help with loss of InSAR coherence, unless you can find some pairs that have better coherence and use those.

The fact that the two images are separated by only 4 days instead of a multiple of 6 days also suggests they are from different tracks. You need to use scenes from the same track to do accurate InSAR.

this is true. Any temporal baseline should be divisible by 6 (in case of Sentinel-1 data) to go sure that the acquisitions are from the same track. Maybe this illustrates it more clearly: INSAR / DINSAR - Perpendicular baseline calculation