I understand that it should be possible to generate coherence for the full IW SLC swath (i.e. combining IW1, IW2 and IW3) in one step, but I haven’t figured out how. If I deburst each image in the SLC pair first, the coregistration step will not run, because it expects separate subswaths. I can live with the idea to do each subswath separately and merge afterwards, but I guess a single step procedure is more convenient. I don’t have issues with disk space or RAM. I use the latest SNAP version.

I just generated a (wonderful!) S1A-S1B coherence image for a single subswath and would like to scale up.

So what is the obstacles you faced during merging all IW sub swath?

same question i want to ask as asked by glemoine

I think you could deburst and merge all sub swath together later on you could process the IW1-IW3, as one SLC image

Note: In the September 2015 release of the Toolbox, it should be possible to process all
subswaths all at once.

(this relates to coherence generation).

I am not sure whether this is actually the case, but if so, what sequence of steps would be needed?

Follow the same sequences but what you should do if I understand well from your first post that you would like to process the IW1-IW3 as one SLC image, so merge them as it is mentioned in page 16 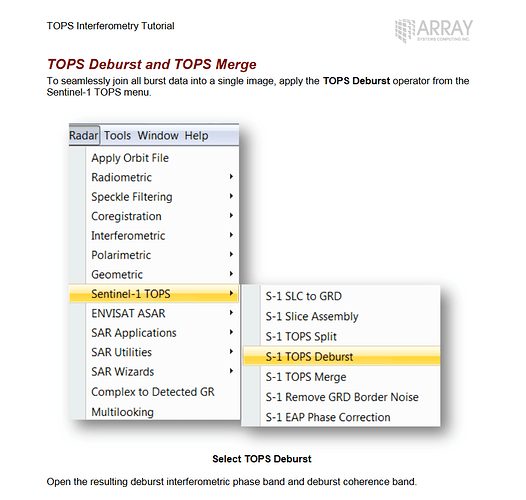 No, that does not work. “If I deburst each image in the SLC pair first, the coregistration step will not run, because it expects separate subswaths.”. So, maybe the note about the September 2015 change was not yet implemented.

I am sorry might be I did not get your point now, In InSAR processing chain, it is possible to change the sequences of some steps, and in this case I think it is possible, However, if you are talking specifically about implementing using SNAP, That is I did not apply before, However, I applied for single IW.

You can use this script, which is in ~/.snap/graphs/Radar/InSAR\ Graphs/ (linux install, likely in equivalent location on other installs):

and change the Interferogram step(s) with Coherence product generation.

Effectively, this will generate coherence for each subswath and merges at the end.

It’s not very fast, but does the job.

Yes, the All Swaths - graph works but it’s inefficient compared with processing the swaths sequentially. If you split the IW into separate subswaths and write those to disk, you can do sequential processing in batch.

Guido, sorry for the late reply but, yes this is currently the only solution. Take the all swaths graph and replace interferogram with coherence if you only want coherence.

Have you solved this merging problem? I met the same question with you. Thanks.

Hi all, I’m also interested in the best practice for generating the coherence for all subswaths. The goal would be to have a coherence image in the end where all subswaths are merged seamlessly.
I’m using the gpt tool in order to process time series. (SNAP v7.0)
If I understood correctly the best practice up to the last point was to calculate the coherence seperately for every subswath and merge them afterwards (which SNAP process would be used to merge them?).
Best ,
Peter

If I understood correctly the best practice up to the last point was to calculate the coherence seperately for every subswath and merge them afterwards (which SNAP process would be used to merge them?).

yes, I would recommend this. The tool for this is S1 TOPS Merge.