dB or DN for image processing?

Hi all,
Since the original information (digital numbers DN) can be converted to backscatter (sigma0) values, or even to sigma0 in dB: what type of image information should I use for digital image processing? What value(s) is(are) better for image processing? or are the three (DN, sigma0, sigma0 dB) equally accepted and just depend on my application? I must add that I’m not interested in using classification linked to a specific value of backscatter from a structure, I want to use segmentation and classification procedures that rely mainly in gray level values of a scene.

I would greatly appreciate any help. Thank you in advance

1 Like
Conversion to dB
What is "convert to dB"?
Image Fusion Using Sentinel 1 and Sentinel 2
Getting oil spill bit mask in snap from SLC product
falahfakhri March 1, 2017, 7:22am #2

There are many topic in this issue, However, are you asking about S1 Or S2?

But anyhow, take a look at these topics

The process of converting values to TOA Reflectance (L1C product) into TOA spectral radiance is described on the page: http://s2tbx.telespazio-vega.de/sen2three/html/r2rusage.html?highlight=quantification rToa = (float)(DN_L1C_band / QUANTIFICATION_VALUE); L = (rToa * e0__SOLAR_IRRADIANCE_For_band * cos(Z__Sun_Angles_Grid_Zenith_Values)) / (PI * U__earth_sun_distance_correction_factor); The desired values can be found in the xml file of the L1C product. However, there is one weird thin…

sen2cor converts L3C products into L2A. This is, above others a radimetrically corrected BOA reflectance image: [image] [image] source: http://step.esa.int/thirdparties/sen2cor/2.2.1/S2PAD-VEGA-SUM-0001-2.2.pdf

How to open Landsat 8 surface reflectance in SNAP snap

Hi, The last time I used landsat it was 1999, it was Landsat-5, what I did to achieve or to convert the DN to Radiance and Then Reflectance is using this equations [image] and then [image] is it mean now taht they already converted and only to change the format we could get the R. Or\and Radiance? More details in my M.Sc thesis, but it is in Arabic, https://www.researchgate.net/publication/307655166_Testing_remote_sensing_techniques_in_determining_soils_units_of_different_Gypsum_c…

How to open Landsat 8 surface reflectance in SNAP snap

The normal Landsat data contain different scaling factors to get radiance or reflectance values. But both TOA. Here we talk about surface reflectance.

@falahfakhri I think he is talking about S1, because you don’t have sigma0 values in S2.

@ErSa26 Have a look in this thread. Maybe you find some information there.

Yes, you are very right, I confused because I was thinking that his question has two parts, one concerning S1 and the other concerning S2.

Thank you all for you answers,

I have images from Cosmo and Sentinel 1A, I didn’t mention it because is more like a general doubt about the type of data I should use, I was using some segmentation algorithms that take into account gray level information from an image, so I was wondering how necessary is to use backscatter instead of the DNs if I’m not interested in the physic magnitude. Is more accurate if the images are first calibrated radiometrically? and if so: should I use sigma0 but in dB?

totally depends on your subject:

If you just want to classify water bodies you can leave intensities. But you would surely get better contrasts when converting to Sigma0 db.

If you want to perform operations on multiple images I generally advise calibration because it removes acquisition-dependent bias (e.g. incidence angle).

If you want to detect urban areas you wouldn’t convert to db as the contrasts of bright areas are much clearer in the non-logarithmised image.

Thank you so much for your answer,

So it is always correct to work with any of these three values, and my choise just depends on what do I want with a better contrast (my region of interest), right? I’m working with images that contains sea ice, I’m attempting classification of new ice, and I was not sure if I did wrong using sigma dB values in my first tests since it is a logarithmic scale. I try this because I noticed a better view of the new ice in the images, but I really was not sure if the dB units were allowed for my segmentation process, thank you for the clarification.
You also mentioned the acquisition bias, so at what point (or how feasible is) the comparison of calibrated SAR images acquired with different satellites?

And again thank you for your last response.

Comparing images of different satellites is totally legit. Make sure you convert to Sigma0 so backscatter per pixel is calibrated. The only thing you need to be careful is images from different looking directions: If one image was left-looking and the other was right-looking (depends on ascending/descending pass) you can get different images (see below). So this should be the same in both images, preferably also the pass. 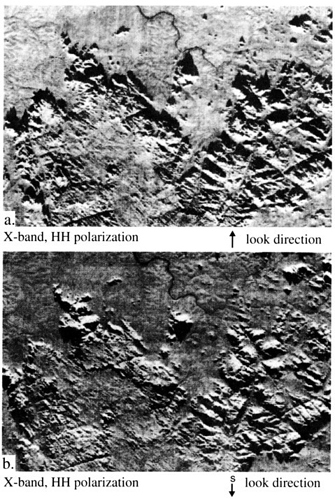 Thank you for your help and comments

I believe there is nothing left to be solved, now I will do my tests with your suggestions and considering the look directions.

I want to use thresholding teq. in my studies to delineate water from other land cover. what would you suggest of these two : db image or DN image and why ? If db image, is it compulsory to generate it to sigmma naught db before applying thresholding teq ?

Please have a look at these comments

@ABraun
@marpet
Will you still suggest to go with the same pass for areas with little topographic variation and homogeneous forested landscape?

In such areas, is the terrain flattened gamma0 not sufficient to deal with the acquisition-dependent bias (like incidence angle) so that what we observe is primarily a function of the target and not of the incidence angle or the look direction?

In terms of the backscattering coefficient in dB, can we establish an uncertainty threshold (of certain dBs) within which it will be ambiguous to comment if the difference in the backscattering (either increasing or decreasing) in a time-series is occurring due to the change in the target/landcover or is merely an effect of the imaging geometry (incidence angle and look direction)?

for both questions, I would say this depends on the type of surfaces you look at. Terrain Flattening might not ultimately needed, but neither will it introduce false patterns in areas with little topography. You could compute Sigma0 and Gamma0 and then compare if there are notable differences.

About the backscatter variations: I think you can only answer this with careful inspection, comparison and analysis of backscatter over different times, surfaces and geometries. There are studies which estimate the amount of variation attributed to each of these factors, but I wouldn’t trust a threshold of a study which was conducted under different settings too much.

Will you still suggest to go with the same pass for areas with little topographic variation and homogeneous forested landscape?

In such areas, is the terrain flattened gamma0 not sufficient to deal with the acquisition-dependent bias (like incidence angle) so that what we observe is primarily a function of the target and not of the incidence angle or the look direction?

Gamma0 will correct for biases coming from imaging geometry (topography), but it cannot deal with scattering media that is non-isotropic. In other words, you cannot assume ascending and descending images will give comparable values after Gamma0 conversion, since the media can scatter energy back to the radar differently depending on look-angle (a non-isotropic response).

I would see try it and see what happens