What is the difference between using a dem of 90 m (SNAP default) and one of 30m or better resolution to obtain an Interferogram, I mean, will improve the pixel size of the interferogram?, the precision?, the detection of deformation?

The use of a DEM of 90 or 30 m will only serve as a basis to determine the distance between the satellite and the ground, then the interferometric analysis will be the same regardless of the size of the DEM and will only improve in spatial resolution.

The DEM is used for removing the topographic-phase caused by terrain relief. Better DEMs do this more successfully but it is not useful to use a DEM with a smaller pixel size than your interferogram.

So, the best free DEM for sentinel DATA is the ALOS-PALSAR DEM?

Thanks for your help

that is a quite popular misconception. Although the DEMs delivered with the ALOS RTC files have a pixel size of 12.5 meters, they are mostly just up-sampled DEMs from SRTM to match the spatial resolution of the input data (ALOS PALSAR with 12.5 meters in this case) 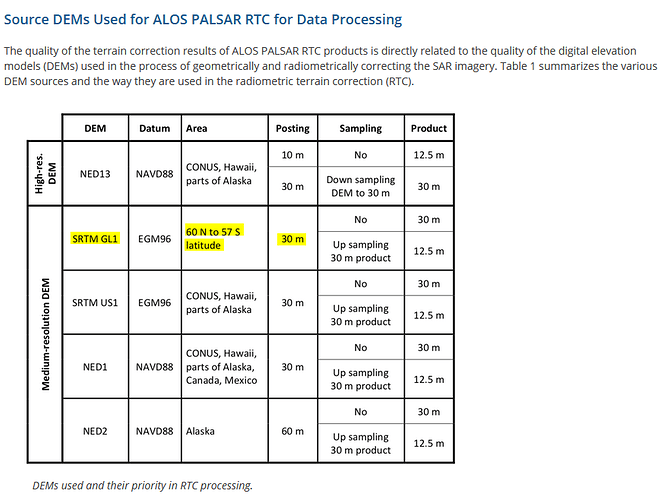 So the quality is not better than any SRTM which is automatically downloded by SNAP (SRTM 1 ArcSec). You can use it right away.

If the quality is not sufficient, you can also manually download ALOS W3D30 data here:
https://www.eorc.jaxa.jp/ALOS/en/aw3d30/index.htm

Their spatial resolution is also 30 meters but it was originally generated from stereoscopy at 5 meters spatial resolution, so in many regions it contains finer details than SRTM. I made a comparison once which shows it a bit. 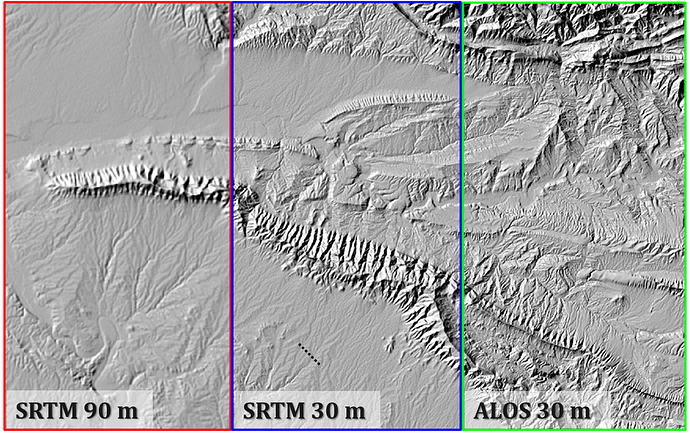 I’m very grateful for your clarification. Thank you

May i know using which software or tool is used to generate multiples profile plots in single plot ? which you have done in your above post.

I used QGIS and the profile plot tool.

Thank you for your reply

@ABraun, do you think that for DInSAR, using AW3D30 is better than SRTM1 or SRTM3? Which one would you recommend to use in the case of landsides?

AW3D30 is the most recent one and has the (originally) highest resolution. But it always depends on the study area as well.

Do you have any suggestions based on your experience ?

No, because I don’t know your study area, nor how you plan to integrate the DEM for the landslide analysis.
There is no “best” one, I’d say - you have to check the height accuracy of the different DEMs in your study area and consider how you want to deal with uncertainties in the data, especially if they allow you to extract the information at the desired level of detail.

There are numerous comparisons of the different DEMs which elaborate it very well. If you want to make a solid decision, I recommend going through some of these:

@ABraun thank you very much for this message

If you have a better DEM for removal of topographic phase, you can use it as an external DEM.

if you have a DEM of higher resolution you can use it, of course. I just wanted to point out that the 12.5 m of ASF are not better than 30 m of SRTM

basically, I don’t know how the product of InSAR can centimeters level, but the InSAR method uses DEM meter level to remove of topographic phase?, Can you explain? or give a reference.
Thanks.

InSAR measurements of displacement are relative, so DEM-errors cancel out if you use the same DEM in all interferograms (geolocation accuracy suffers though).

Guidelines for SAR Interferometry Processing and Interpretation This manual has been produced as a text book to introduce radar interferometry to remote sensing specialists. It consists of three parts. Part A is for those who have a good knowledge of...

Thank you for your reference.

the DEM is used to estimate how much of the patterns in the interferogram are caused by topographic variations. You don’t need a highly exact DEM for this task (although better quality helps to some degree). The remaining variation is then attributed to relative surface changes based on the phase information (wavelengths at the centimeter level which allow the high accuracy).