DInSAR and SBAS for landslides studies

Hello, everyone. I’m doing DInSAR processing over a landslide ocurred on 01 July 2022. Unfortunately, I haven’t found suitable results. I think it isn’t good results because the landslide was very strong, but displacements what I got are very small (~ 4 cm). I’ve read another posts about these problems and I realized not all landslides can be measured with radar. I hope SBAS overcomes this problem.

I’ve also done tests about earthquakes and, in these cases, I got better results. I’ve concluded DInSAR is more suitable for studies about earthquakes (case Sentinel 1 images) because there are less problems that should be considered (there aren’t problems about slope and LOS movement orientation). Maybe Images with better resolution (for example, PALSAR images) improve the displacements results, but now I’ve doing a research with Sentinel 1 images.

I’d like to know how is the best way to study landslides. Based on all I read, advanced technique called SBAS is more appropiate. Am I right?

In my opinion you can change your some stamps parameters. My advice is change density to percent and use 0.6 for mt_prerp. In the other way you can try licsbas for your study area. And finally you can use dongyusen scripts for change multilook settings.

Are you looking at a slow-moving landslide (moving a few centimeters to a few meters per year) or a catastrophic landslide collapse? 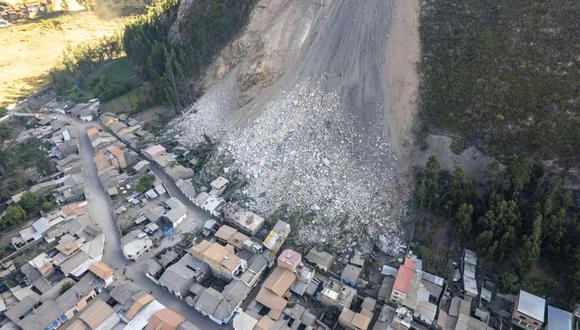 Moreover, I would like to know if SBAS can be used for detecting displacements over slow-moving landslide.

@Renzo I’d suggest to take a look at this document - https://land.copernicus.eu/user-corner/technical-library/egms-specification-and-implementation-plan and especially to sub-section 3.2.6

Thank you for your reply, @hriston_bg. I’ll take a look the document. I’d like to ask you another question about DInSAR processing in SNAP (not SBAS). Which should be the image order for DInSAR processing?. I mean, must the oldest image always be the master one and the newest image be the slave one (for ascending and descending images)?.

I ask you this question because I’ve procesed two descending images for studying an earthquake event ocurred on September 16, 2015 (I think it’s a good way to prove InSAR technique for new users as catastrophic landslides are more difficult or impossible to detect with DInSAR), where the oldest image (20150824) was master and newest image (20150917) was slave, but the deformation results look inverted (negatives values).
I think they’re inverted because, based in literature, negative values of deformation, for descending images, should be interpreted like deformation towards the satellite (the target is closer to satellite), but GPS measurements found it moved away from the satellite. For results have sense, I should have gotten positive values of deformation LOS with SNAP. I think the magnitude values are good, but the negative signs don’t like me.

I’ll add an image which shows measurements of a GPS station (vertical deformation was negative). 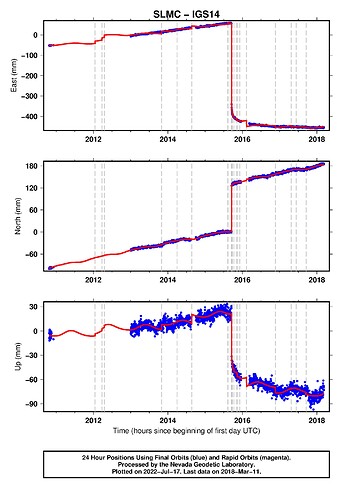 I’ve proved the opposite case (oldest image (20150824) as slave and newest image (20150917) as master) and I got deformation positive values, but not same magnitudes (for example, I’ve obtained a +11.2 cm deformation for this case, and -11.5 cm for the first case). The values are differents since the interferogram formation, so I think corregistration affects the results (selection of master and slave image).

So, I don’t know if I need to change the order depending if I use ascending and descending images. The opposite case generated values positives which can be interpreted like subsidence and can be compared with GPS results, but I believed master should always be the oldest image and slave should be the newest image (for ascending and descending images).