Is it planned to make the sentinel-1 toolbox download restituded orbit files automatically as it does for the remaining types of orbit files? This would be very useful for us.

You seem to be using the last stable release of Sentinel-1 Toolbox, which is quite old. I suggest you switch to the SNAP beta release, in which the automatic downloading of restituted orbits is already included. The beta release surpasses the last S1TBX release in functionality anyway and is just as stable by now.

Indeed, I used the stable release. Thank you for letting me know about it. I will follow your suggestion.

It is not clear for me if the beta release you mention corresponds to the master branch in GitHub, and if I should use the beta version of the snap-engine or the s1tbx. Could you clarify this?

We need to compile s1tbx from the sources. I succeeded for the snap-1.1.x branch but I was unable to do it for the master branch…
The README.md files from the master branches of s1tbx and the snap-engine do not explain how to compile/package the code. So could you (or anyone) indicate where I can find this info, or how to do it exactly?
Thank you!

You can find the most recent beta release here:

Originally published at: http://step.esa.int/main/snap-2-0-beta-6/ A 6th beta release is ready to be downloaded with many fixes and improvements. In particular, we have been working on improvements with respect to data products that contain multiple raster sizes, such as the S-2 MSI L1C product. Additionally we have enabled the update center. This will make the update process easier and we can release fixes more frequently. Also we have considered several comments and issues which were sent to u…

As far as I know, the beta release uses the exact same code that you can find in the master branches, albeit from a slightly older date, of course.

If you want to build SNAP from source, then the instructions in the s1tbx repo have worked well for me so far.
Really though, despite not being explicitly mentioned anywhere, the easiest way to build SNAP and all of the associated toolbox (if you are on Windows at least) is:

You now have built the most recent version of SNAP and the toolboxes. To run it you can either use the IntelliJ IDEA-specific instructions at the end of the s1tbx readme or package an installer. To package an installer you need Install4j. Install4j6 is available for evaluation for a pretty generous duration of 90 days, if necessary. If you have it installed, then just open snap.install4j found in snap-installer and follow the steps there. It is probably a good idea to disable JRE bundling for your own convenience. After building a package you have your very own SNAP installer, which you can use as expected.
Hope this helps!

Thanks for your detailed answer. We have still some remaining issues.
We managed to follow all the steps including the maven compiling.
However after that, we would like to package only the s1tbx.
Before, when using the snap-1.1.x branch we could package by executing the following command:
mvn package assembly:assembly -Dmaven.test.skip=true -P withbeam

However, for the master branch, this does not seem to work. The build fails in the S1TBX Rich Client Platform. Please see the attached log: error log.txt (8.0 KB)

Note that we are compiling and packing everything from Linux environment.
Thanks a lot for your support.

I might be misunderstanding your intention here, but you cannot use S1TBX without SNAP. It is the platform it runs on.

I don’t think there is a way to package SNAP or S1TBX without install4j. The above error should be resolved by doing “mvn clean”, though.

If it’s of any help, during installation the files are moved to the following locations (relative to /snap-installer): 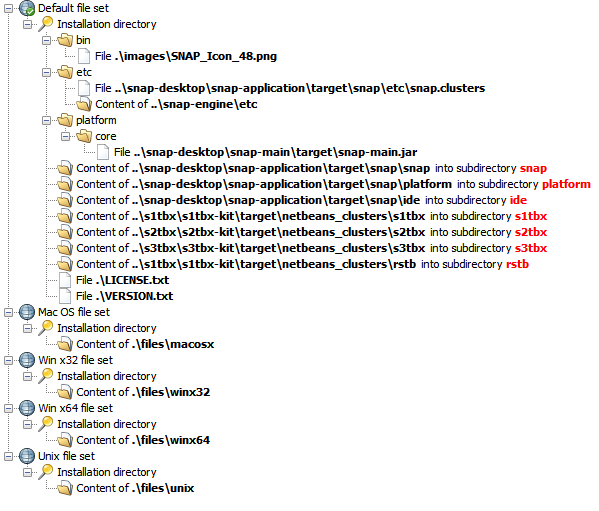 Our intention was not to package S1TBX without SNAP. When I mentioned “only the s1tbx”, I meant packaging without s2tbx or s3tbx.

For the snap-1.1.x branch (https://github.com/senbox-org/s1tbx/tree/snap-1.1.x), in the readme file, there’s a command to package for all the platforms. That’s how we did for the stable branch:
mvn package assembly:assembly -Dmaven.test.skip=true -P withbeam

However that didn’t work anymore for the beta version.
Finally, we follow the instructions about the use of install4j and we succeeded.

Thanks for the support on this issue!

When running the command "mvn package assembly:assembly’
in the master branch of s1tbx we receive always an error, identical to what has been posted in Snap-desktop build failure.

The command “mvn clean” does not solve this error.

Do you have any suggestions on how to overcome this error and generate a s1tbx package (just a folder with the UNIX binaries)?
We do not need to generate an installer.

Thank you in advance.