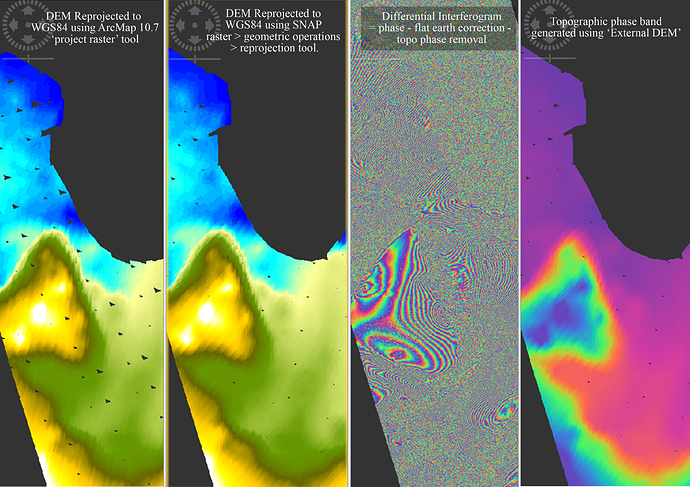 I have been trying to use external DEM for topographic phase removal for my study area in Antarctica. There are some problems that I have come across, which I wish to report. Someone could also correct me if I did something wrong, please.

PROBLEM = Visible voids / data gaps in the elevation band. The same has propagated to ‘Topographic phase’ (image 4). Further propagated to differential interferogram (although not visible in the image shown here).

Both DEMs behaved in a similar way, unfortunately.
QGIS reprojection tool was also used, to end up with the same problem again. What could be the problem?

@ABraun @marpet @lveci - Any comments on this? I am unfortunately stuck with this.

Have you solved it? I encountered the same problem when I used ace 30 to process Icelandic data.

So are there holes in all DEMs, or just in some? BTW today Copernicus 30m global DEM is available and it is of superior quality compared with the other mentioned DEMs.

@jun_lu please check this one and open a ticket if necessary. I hope it’s not connected to the handling of zeros.

A JIRA ticket (https://senbox.atlassian.net/browse/SITBX-881) has been created to track the issue. We will look into it. Thank you