Hi there,
I have just produced my first displacement map using SNAP. The graphics are telling me that a very large part of the LA area has experienced significant uplift (~0.1m). By “very large” I mean several towns worth. I have attached a screenshot of my displacement map. Because of the size of the area and displacement magnitude, I am doubting the validity of this data. Has anyone had this issue before? What would the cause be?
The image pair is from September 8 and September 20, 2020, over the greater LA area.
Thank you,
Grace 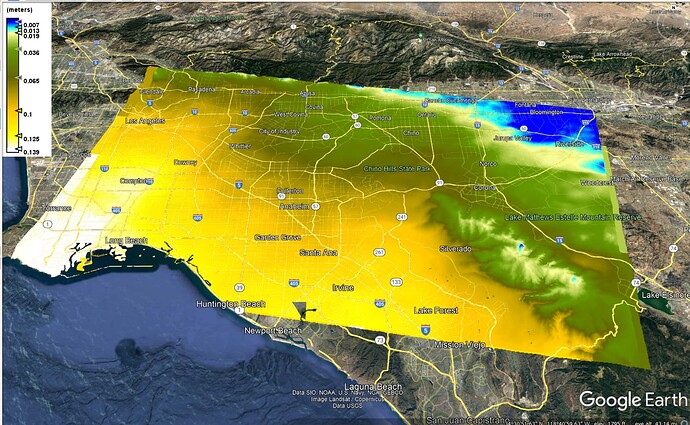 The influence of atmospheric delay cannot be eliminated by the two-track D-InSAR, that is to say, the influence of atmospheric delay is included in the obtained deformation results. And I noticed that the closer to the sea, the higher the “deformation”. So I think it’s the effect of water vapor.
You can read this paper
Atmospheric effects in interferometric synthetic aperture radar surface deformation and topographic maps.pdf (2.4 MB)
, which mentions that “a 20% spatiotemporal variation in relative humidity in the troposphere can lead to ground deformation measurement errors of up to 10 to 14 cm”

Looks like atmospheric artefacts as Nijat was saying. Close to Silverado the displacement looks like it has DEM-related features in it which is evidence for atmospheric stratification.