I have a quite interesting question. I processed Sentinel-1 data including 4 years data (2015-2018) with SNAP-StaMPS (PS) software. I investigated time series of a point (figure below) and about 400 mm displacement is observed. Mean velocity (v-do) of that point is about -105 mm/year. Everything is OK until now. 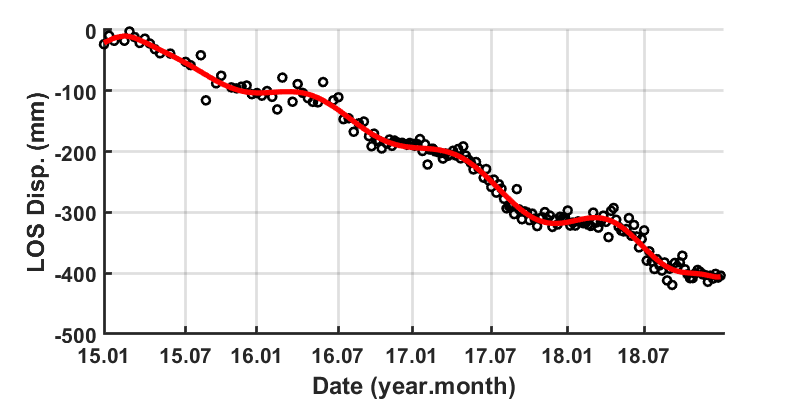 But then I decided to process data annually. For example, I processed only 2015 S-1 data with a new master within 2015. So I have results of each year (2015,15,17,18) processed separately from each other. Then I looked at the same point that I previously explained, I see quite an interesting result that I could not able to find an explanation myself. Mean velocity (v-do) of each year is as follows:

Compared to the mean velocity of the whole data (2015-18) which is -105 mm/year, these annual velocities seem to be so high.

Do you have any idea why could that be?

What is the main event has occurred or/and continuing happening in the study area?

What time this event has occurred?

Does the number of S1 images of each year are the same?

What are the temporal baseline of each year’s image?

Did you apply the same parameters for each year separately same to all years together? Or different?

Does this curve represent a single point?

This could be the first effects of differences, more images in most probably cases more detected time movement and also more points, could appeared, as you see the displacement is increasing in parallel of images increase, But still some investigation should be done, select some number of points of each year and look at the curve behavior this point should be the same positions of each year.

The previous results of four years give the average of 50 radius.

Something else is worth to detect, compare the water pumping period and the dates of your images and also the result of displacement, all of these issues give an indicator of the results.

Well processing each year data individually provides me more PS points, that’s for sure. But my focus here is the same position. Annual results and whole data processing may result in different PS numbers but hence we are looking the mean within 50m radius I think it should not differ so much in general.

Well we will compare it with groundwater level. But here I just try to understand why annual processing of data gives higher deformation velocity compared to whole data processing.

The number of points are different within the radius 50 , should be increased once the number of image are increasing, and the all images are processed together , the result of displacement is the average of points within radius 50. An important issue related to all image results, most probably scenario the number of points should be increased , but might be the most effective points are not detected, that’s why, I asked you within my previous post, to check up the behaviour of same selected points in each processed package and compare them.