I wanted to test the GeFolki coregistration and had a closer look at it. According to the homepage it is able to coregister two SAR products but also optical data with SAR data.

It seems like a very useful tool and I like the idea that it is accessible in SNAP. But I had some problems: I tried to coregister two optical VHR scenes (blue band only for a first test), but the resulting product contains only one band (the one of the slave image):

Has anyone made first experiences with this tool?

I tried to coregister two S1 images (subsets) of ascending and descending pass (as suggested by the tool manual), but the data is somehow not recognized. 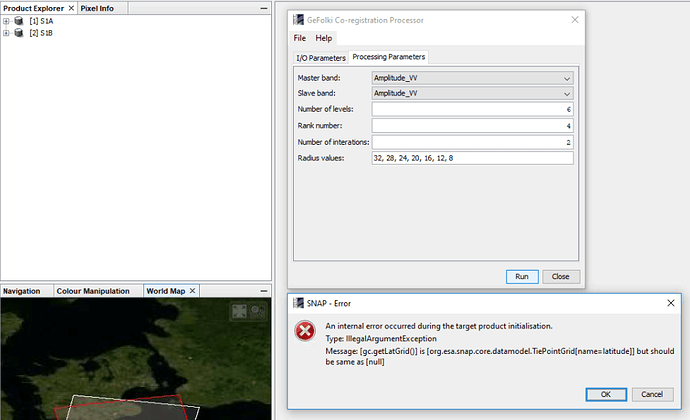 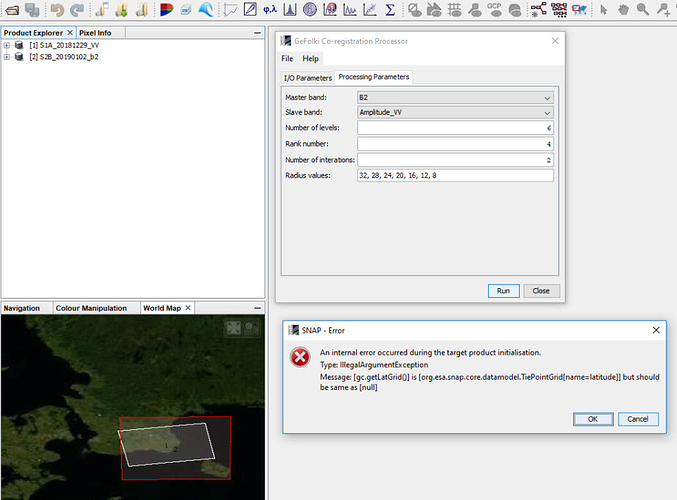 Hi Andreas
I am one of the developers of GeFolki. (matlab and python versions)
We didn’t know that GeFolki was already available in SNAP. What I do know is that the implementation in SNAP was, indeed, for an ESA project and the java code should be open-source (on Github) after testing and validation. The development /software integration team is CS ROMANIA.

Thus, we tested it just right now using SNAP but we were also unsuccessful.
Perhaps an additional validation step has to be performed. (Or an initialization step…)
I will try to know where things are.
Meanwhile, if you are interested in, we can help you to test it directly in python or Matlab on a few examples.

Dear @elisekoeniguer
Thank you for your answer. I didn’t know the tool before, to be honest, but after reading the papers I became really curious and think it is a great thing and very useful. I didn’t have the time so far to test it via Python but asked one of my students to do so. Based on what I read in the documentation it seems quite easy to do. But thank you for your offer, I might get back to it some day. I’ll report about the outcomes anyway

e can help you to test it directly in python or Matlab on a few examples.

Hi everyone, the basic implementation of Gefolki in SNAP throws an error when writing to the new product, due to “a band with the same name already existing”… I try to coregister two S2 products, so yeah, of course they have bands with the same name… however, only the bands from the image that is adjusted should be kept though. I renamed all bands of the first product, and the error message persists after repeating the coregistration.

My conclusion is that the error message is somewhat incorrect, since the log file says
"Type: OutOfMemoryError
Message: GC overhead limit exceeded
"
Any suggestions on how to proceed? The two scenes are roughly 600 Mb each (zipped), and I run a computer with 4 GHz intel i7 CPU, and with 64 Gb ram. If this type of operation cannot be performed with this configuration, I would be happy for suggestions on other solutions.