I was wondering if there is a general data preprocessing chain for Sentinel-1A image? I am working on lake ice classification.

Are these steps necessary and in the right order? Do I need to perform multilooking?

Your terrain correction problem sounds like an issue with SRTM DEM download, you should check if all DEM tiles downloaded correctly (I assume your area of interest is within SRTM coverage which is between ±60 degrees in latitude.

Multilooking is only necessary if you want to reduce filesize and don’t need to full resolution.

Thanks for your reply mengdahl. Yes I thought so but for there is a bright seamline (noise) between two swath for the HV band. The thermal noise removal did remove it but maybe there are other ways to remove it? See glemoine’s post: Striping in IW GRD VH & low backscatter scenes.

Thermal noise was removed only after ~July 2015 scene unless updated products applied the removal pre-July scenes.

The built-in removal is not sufficient especially for HV. You may refer to several posts from me in fall 2015.

Dear colleagues, It seems the algorithm for "GRD Border Noise Removal" does not work properly over OCEAN areas. I have already changed the threshold from 0.01 to 10 and the results are the same. If the document "Masking "No-value" Pixels on GRD Products generated by the Sentinel-1 ESA IPF, Reference MPC-0243" were available, we could analyse better what is happening. Anyone has a trick for it? Regards!

Products do include a thermal noise LUT to enable noise to be removed by the user but as already indicated, this is not been applied to the product (this LUT can be found in the noise annotation files).

Thank you Peter, that means we need to update our online documentation which indicates that the noise removal is performed by default:

Is there a specific reason why GRD thermal noise removal is not on my default?

To sum up you can’t do something wrong if you always include the thermal noise reduction in your processing chain.

Actually it will give you an error that the thermal noise correction has already been applied and not let you continue.

I am doing my master on sea ice observation using a SENTINEL-1 EW GRD product for an area of Greenland. The problem i have is that the SENTINEL-1 EW_GRD product i have downloaded (2015 December) has some bright stripes along the image (I know that this problem has been raised before, i have seen the commends but i am bit confused).

So, my question is, Does the image quality can be improved any further? or I have to accept that nothing else can be done on the image. So, I move on and post-process the SENTINEL 1 iproduct as is

I would appreciate any help

Thank you in advance 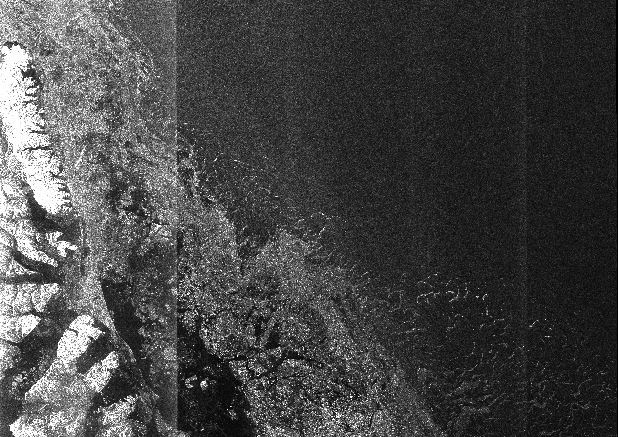 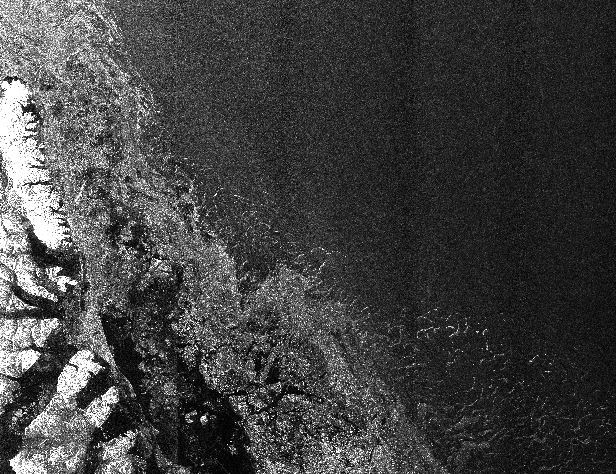 The second image looks much improved. I believe the thermal noise vectors in the product are intended for correction over areas with higher backscatter than ocean. Over ocean you may need to look at the average cross section and come up with your own normalization. In one image it may be easy to do but it may be more difficult to come up with a general solution that will work with any scene. If someone has a general correction that’s easy to apply, we could implement it in the toolbox.

Thank you for your quick reply

Hi there, I did these pre-processing for my Sentinel 1 data: Thermal noise removal–> Apply Orbit file --> Calibration to beta ) --> Radiometric Terrain flattening --> Range Doppler Terrain.
So I have been told that it is ok to skip “Speckle filtering”. And now I have been told by others that “Speckle filtering” is necessary. I was wondering if I can do it right now after Radiometric Terrain Flattering and Range Doppler Terrain Correction? DO you think doing Speckle filtering as the last step might harm my results?
Thanks for your reply in advance

I would personally say that it strongly depends on your image. Speckle filtering can surely increase image quality and it is done best at an early stage so speckle is not falsely propagated in ongoing resampling processes (within terrain correction, for example). But if you are interested in smaller structures or image texture, speckle filtering might remove the information you are interested in.
So saying speckle filtering must be done is surely not correct, but it is advisable in many cases.
If you do it after terrain correction you have to notice that your image was already resampled to a new resolution and coordinate system. So your pixel values were already changed (and in case of bilinear resampling this involved a first smoothing). So the results might be different but it is advisable to compare.
Please also note that speckle filters perform different when applied on the db image.

In case anyone is interested in using snappy (SNAP Python module), I have written a script to pre-process Sentinel-1 GRD products using snappy https://github.com/wajuqi/Sentinel-1-preprocessing-using-Snappy .

The processing steps I used are:

One correction, speckle-filtering should be done in radar-geometry, so before the Terrain Correction step.

Dear @ABraun ,
According to your explanation, should we perform speckle filter before the radiometric calibration (before having dB image)?