How can Sentinel-1 images be un-flipped?

If you’re using SNAP, then I’d recommend Range-Doppler Terrain Correction, this will flip the image if needed and project it correctly geographically!

S-1 is always right-looking. Use terrain correction to project into map coordinates which fixes any orientation-issues.

Thank you! Any idea how to run Range-Doppler Terrain Correction from command line?

Do you mean using gpt?

Yes. I’ve found the gpt Terrain-Correction command. Is that the right tool?

I probably wont be much help with how to run it through gpt unfortunately, I’ve only used it in SNAP/Python/Java

You should recall that S-1 is a radar. The geometry on which the data is provided is the most simple one if you think at it from a radar point of view. It is a collection of echoes ordered in time and this both in azimuth and range.

This is the natural geometry of the radar and the most simple one to work with to fully exploit the product.

The side effect is that indeed depending on the pass (ascending/descending) your image might appear north/south (ascending) flipped or east/west (descending) flopped!

This is therefore not an orientiation issue but a convention that is followed by ESA (for ERS, ASAR and now S_1) and most of SAR data providers with the exception of MDA for radarsat (if I am not mistaken).

If you are not interested in the SAR timing (fundamental for application like INSAR) and want to combine your data with other sources (GIS). You have two options:
a) geoocoded/ortorectify the product, as mentioned previously using SNAP or other to project the data on our favourite world reference system
b) Open it directly with a GIS (open GIS) as the product are provided in geotiff, we provide a full grid of ground control points allowing openGIS/GDAL to geocode it on the fly

a) is by far most accurate as you can use also a DEM to correct for topographic and radiometric distortions induced by topography using the terrain correction method.

Just to make sure I understand correctly, this means that for ascending passes it is looking to the East and descending passes it will be looking West? I’m assuming the right-looking direction is in relation to the spacecraft’s forward movement in orbit?

Yes that is correct.

I faced this problem too. The terrain correction does not change the situation.

I use SNAP Graph builder named "TOPSAR Slices Coreg Interferogram for two masters and two slaves of S1 TOPS data to produce interferogram and coherence. The problem with this is that the output is un-flipped south-north. I even modified the graph to apply terrain correction. I also made another graph to do first slice assembly and then apply basic operations to geocode S1-TOPS mode data, but the result is the same. Do you have any suggestion to correct this issue?

Thanks in advance,
Vahid.

after Range Doppler Terrain Correction, the data should be no longer flipped.
Have you tested it outside a graph by simply applying the module to your interferogram?

slaves_assemble_split_applyorbit_slc_grd_utm.xml (11.0 KB)
The attached is the graph builder I use for geocoding two images with assembling them before terrain correction.
Do you see anything strange in the graph?

I have tried withour reprojection, but nothing good happened at the end.

what projection did you select and what image did you use?

I downloaded these images and recreated your graph. The image is not flipped. You need to add a write ooperator in the end as well, otherwrise nothing will be written.

Besides that: Why do you use SLC data and not GRD? For your workflow, the result is the same and you can skip many steps (Split, Assembly, Deburst) 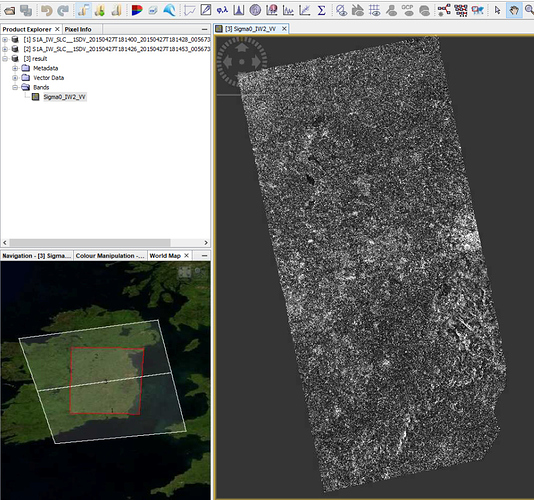 The attachement showes the graph builder to first assemble two masters and two slaves and then generate coherence. But the problem is that I get the error when I open the image in SNAP as bellow:
java.Lang.NullPointerException.
I I am using a machine with 64GB RAM.