How to create a DEM with Sentinel 1 toolbox

I am trying to create a DEM of my area of study and am having trouble in doing so. I believe I’ve generated the right interferogram for my area. What is the next step after the interferogram and the preceding steps after that? I’ve seen three videos offered by ESA about Sentinel 1 but none of them show exactly what I need done. Is there a tutorial or some sort of article I can read?

The PDF tutorial documents on that page

Thank you for the help!

Dear lveci,
Please tell me whats wrong happened here.
I am not able to download Sentinel 1 data through IDM.
This error displayed; 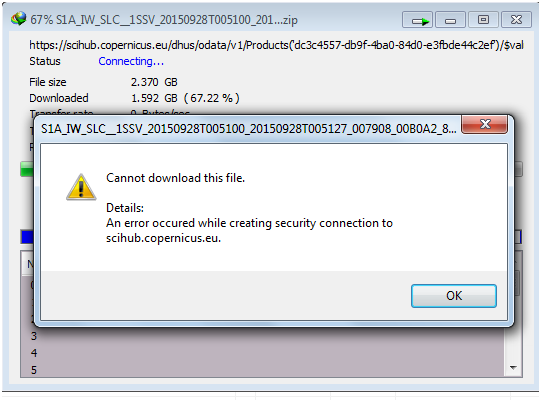 Scihub appears to have issues since the end of last week…

Do you have a full tutorial to create DEM from Sentinel 1A IW SLC product by using SNAP software? I met the same problem with you. Thanks.

it is basically these steps:

Dear all, I'm doing some processing using Sentinel 1A SLC IW data, in particular I'm using 2 pairs of S1 data: First pair: 18 May 2016 and 30 May 2016 Second pair: 29 July 2016 and 10 August 2016 The processing chain I followed per each pair is this: Coregistration, Deburst, Interferogram, Filter (Goldstein), Unwrapping (TOPO) with Snaphu, Phase to elevation, Terrain Correction. Now I'd like to know why the height values of the two unwrapped images (18May-30May and 29Jul-10Aug) …

But it surely requires a bit of trying, experiencing and getting routine with it. And as you can see in the various topics in here, not all regions are suitable for interferometry.

Thanks.This topic is very helpful to me.