Sorry for insisting a bit, but did someone have the same issue as mine (coordinate shift)? How did you solve it?

I think maybe you should use Geo coordinates instead of Pixel coordinates to create subset image. Or there is another tool which may help you, in the menu View->Tool Windows->WorldWind Anysis View, after you create a subset, it will show the region cut from original image in world map.
Here is my example: 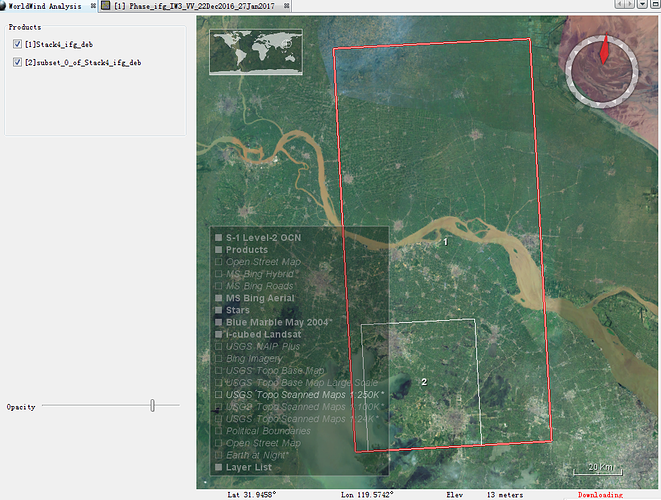 I tried both kind of subsetting, this does not change anything, sadly…

The tool indeed helps, but also changes nothing. Maybe the subset region I’m working on for testing the whole process is too small, but I do not think this might change the issue.

I really do not understand what is going on.

Going from SLC to GRD, the coordinates do not change and the issue remains the same. It is only after applying the terrain correction that the coordinates are finally the proper ones.

@ABraun : Thanks for your help. I will run from the beginning. But I want to make sure that I need make interferogram before deburst, right? Thank you!

I had exatly the same problem.
I decided (arbitrarily) to export to StaMPS images after terrain correction (StaMPS works on the amplitude of the images and terrain correction don’t produces effects on).
If you decide to use my same method, you must use great attention: StaMPS recives in input incorrect heading angle (heading angle is a parameter during step 1) and during elaboration appears an incorrect value. I searched where StaMPS uses heading angle, but I haven’t found functions with explicit call to head angle, so I’m went on. If you find errors/problems/call direct or indirect to functions, please tell me.
My BIG problem is with incorrect results by topo remove, but since I didn’t find a solution, i’m working hard to bypass this.

Are you sure that StaMPS accepts terrain corrected products?

Yes, i’m sure. I work only with terrain corrected products.

Thank for sharing your experience!

Indeed StaMPS seems not reluctant to use terrain corrected products, but almost instantly does arrive the heading problem. In matlab it appears first with this error:

Something’s wrong with the heading when using TC products. Maybe it’s not the best solution? Or we should try by inserting roughly the heading and see how far it goes… I’m gonna dig a little bit further…

I don’t have problems exporting in UTM (in this way i can control pixels size). What do you use?

I do work with decimal degrees. When you mean export, it’s from SNAP to StaMPS I guess?

For export I mean that I apply terrain correction using UTMxxZone as Map Projection(Sorry). After that, I export from SNAP in StaMPS.

I’m a bit confused, so I’ll try to understand your whole process/issue:

Do I get it right?

No.
I apply the UTM terrain correction on the deburst stack and on Dinsar stack as last two steps of my workflow in SNAP ( I obtain Dinsar by deburst stack without TC).
At the end I export into StaMPS.

Okay it’s clearer. It does indeed work, without any problem. The only issue for now is that I did not get the georeferrencing yet.
The two files master_data.lon and master_data.lat are created from the TC deburst stack right? Are is that the sensitive point ?

Thank you so much for your help!..

The two files master_data.lon and master_data.lat are created from the TC deburst stack right? Are is that the sensitive point ?

Lon e Lat files can be obtained by TC deburst stack exporting TC deburst stack in GAMMA format: after export, you must rename the files relative to latitude and longitude (masterdara.lat, masterdata.lon) and after you must copy renamed files in “geo” directory.
Now, you can run mt_prep_gamma_snap and after stamps in matlab.

Yes, I tried it just to si if that was the answer.

Everything seems to work alright, and the results seem coherent! This “workaround” lead to coherent results, so I intend to think that this method works. It is good to know, and hopefully will help future or current users, thanks a lot!

The only remaining issue is why by applying the terrain correction a whole part of the observed scene disappeared… Another image to explain this small issue: 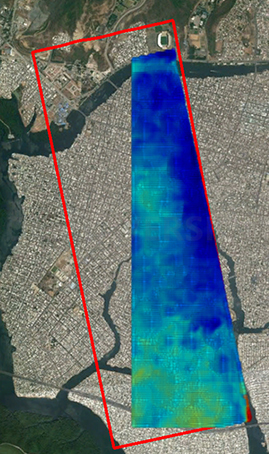 I’ll try by taking a larger scene and also more SLC files, as I just worked with twelve to test the workflow.

Sorry but I don’t understand.
The map that you show is the result of what? Also, is a map of?
Please attach an image with the footprint of deburst stack before and after TC.

Sorry I went a bit fast.
The map I showed is a velocity map after the whole process (StaMPS result) over a part of my study area. It seems coherent, but that’s now the work I have to do!

Here is the footprint before and after TC: 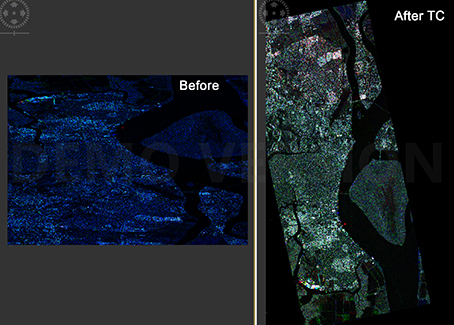