thanks so much for your answers, guys. I changed the names of the lat/lon files and added the full path in the command and now the script is executed. I don’t know if the results make sense in a technical way but I am one step further

I have added an elevation band and saved the product of dinsar. And then run stamps export, but I still didn’t get the dem folder. 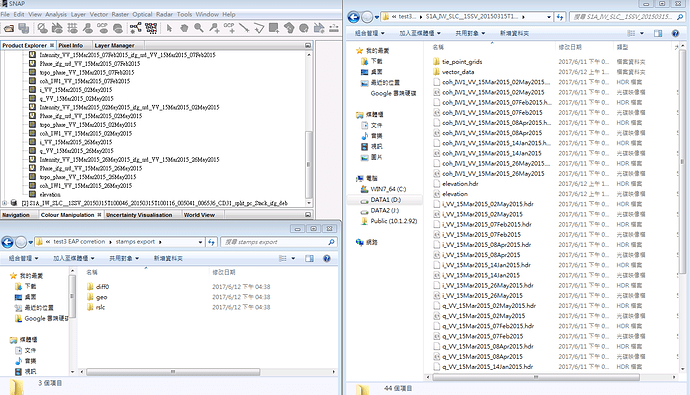 the elevation band should be added to the _dinsar product (interferograms with removed topographic phase), is this the case?

Did you enter both products in the export?
• subset of stack
• subset of interferograms (+elevation)

Yes, I added the elevation band to the product of interferograms with removed topographic phase.
But I put stack_ifg_deb instead of _stack products in the export step.I think I may make wrong here?!

I have changed the input products as following figure, and I get an error “Source product should first be deburst”. So the product I put before (stack_ifg_deb) is the right one?
Sorry for bothered you again! Thank you!

First, thank you all a lot for helping the whole community make advances in the connexion between SNAP and StaMPS. A special thank to @katherine who helped a lot with her detailed step to step how-to.

I managed to make the whole process work, but I have a strange issue. It seems that the processed area is not the area seen during the scene subsetting. By that, I mean that the scene I substracted does not correspond to the final geolocation after the whole process. One image talks more that a thousand explanation I think: 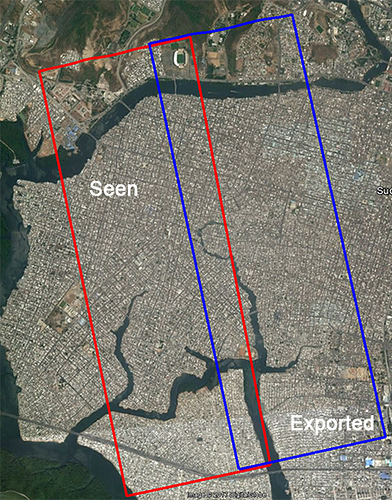 Does someone has a hint to provide me? Did I forget an important step?

Thank you all for your precious help.

@cfatras How did you make the subset?

@ABraun at the same step Katherine indicated, it is to say after the backgeocoding and debursting of the data. I used the “Spatial subset from view” tool.

hmm, the coordinates in slant geometry often differ a bit from the actual geolocation but in your case the shift is too large to be caused by coordinate conversion alone. Does the exported image show the content of the blue frame or does it conatin the content of the red frame but shifted to the east?

I first thought it might be the slant geometry but indeed the shift is too important.
The exported image shows mostly the content of the red image, but looking at the location of the corner coordinates it corresponds to the blue one, as seen after on by StaMPS. I hope I’m clear… 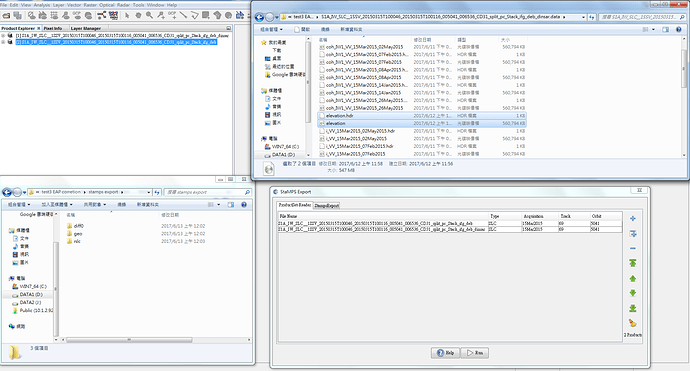 I’ m appreciate your detail instructions, it helps me a lot, but I have a question here, should I apply Goldstein Phase filtering or Multilooking to the interferogram before export?

@Sharon: I can’t explain that, sorry. The only thing I could recommend would be starting from the beginning again and strictly stick to Katherine’s list.

My problem was solved by the way, mt_prep_gamma works fine and generates the output. 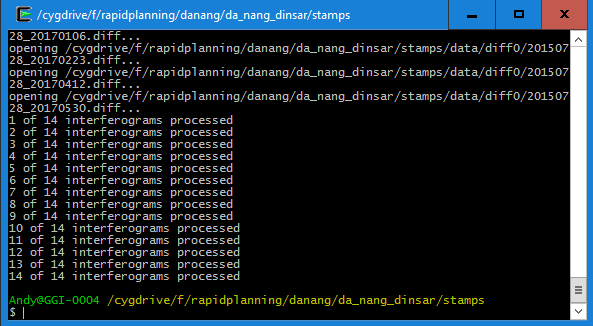 However, I now struggle with the first step of StaMPS: 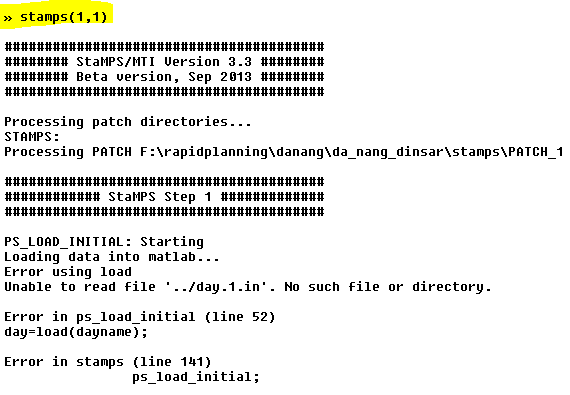 @FeiLiu: Is this the same error you were receiving? I checked annd the file day.1.in doesn’t exist. Can anyone tell me at which step it is created and how it should look like?

Edit: Didn’t work with cygwin and Windows, but worked in Linux with tcsh

It’s not the problem I have met, but for unknown reason I think you have run the wrong function in step 1, if you check the source code of stamps.m in line 138, you will find that the parameter “insar_processor” should be “gamma" and you should run ps_load_initial_gamma instead of ps_load_initial, and I think that is the reason why you get the error message.

Dear Fei,
I am happy that my work appeared to be useful.
StaMPS works with wrapped interferograms as input. Unwrapping is done with PS at the last stage. So, you should not do Goldstein Phase filtering or Multilooking before export to StaMPS. You can do Multilooking just to exemine your interferograms - this sometimes helps to determine a signal.
Good luck,
Katherine

Dear Fei,
thanks for the hint - you were right. I have a file “processor” that states ‘gamma’ but apparently it was not read correctly and the if statement led to the wrong process. I guess theses are the things that go wrong under Windows because Linux doesn’t show this error. So I’m going to stick to Linux for the future.

Thank you for your reply, I think you are right about Goldstein Phase filtering. But I’m still confused about multilooking , Andy Hooper in his StaMPS PS exercise:http://seom.esa.int/landtraining2015/files/Day_4/D4P2a_LTC2015_Hooper.pdf
he use the multilooking interferograms to do PS, besides, I used to view the parameter of Doris, which in StaMPS is used to create interferograms, it also do multilooking by default when generate interferogram.

Dear Fei,
Yes, you are right, multilloking in doris is done by default. But as far as know for PS selection original ifgs are involved. Multilooked ifgs are only for veiwing. But this is not for Sentinel. I think yoy may try if you like. Please, let me know if multilooking works with Sentinel.
Good luck,
Katherine

Thank you for your advice, I may do the experiment later, and I will keep you updated.