Hello
good morning , previously I did icor process in windows 10 but now i am using Ubuntu
I installed SNAP, and downloaded icor setup and installed plugin properly even after opened icor- sentinel-2 processor also i changed directory and try to run but execution completed in 5 sec 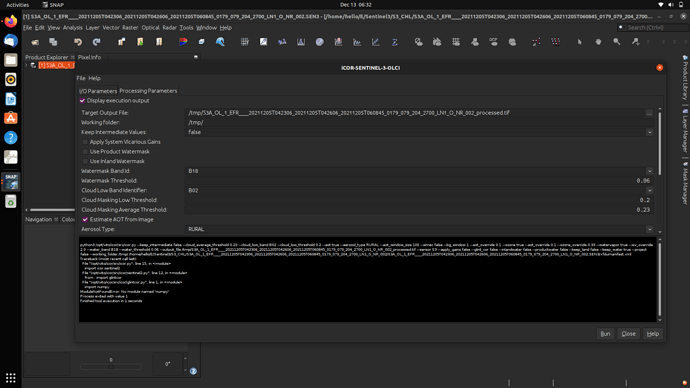 The manual says that numpy, rasterio and gdal libraries are needed:

thanks for your time…where I need to install above lib, I have Anoconda-spyder inside this I installed pandas, numpy, rasterio, even still error coming ,

I anything i need to inside SNAP?

Using Anaconda Python3 puts you in the “deeper” troubleshooting category. I have encountered this many times, and there are many variations on the problem and appropriate solution depending on your individual “use case”. The first step is to
work out the details of your current configuration.

The most common reason for:

is that ICOR is using the system /usr/bin/python3. Anaconda normally installs Python version 3 as just python, so you have two issues:

Some users put conda activate ... in their shell startup scripts.

You can test your configuration by running snap from a terminal where python3 is Anaconda Python3.

Normally, Anaconda Python 3 is run as just python. There are several ways to run Anaconda Python 3 using python3. The simplest is to create a symbolic link (ln -s python python3) in the directory that contains Anaconda’s python. Note that this can break some system scripts that expect python3 to be the system Python 3, so you need to be careful to limit the things you do when Anaconda Python 3 is active.

One you have a terminal where python3 gives Anaconda Python 3 and can load
the 3 required packages, you can try starting SNAP using:

If this works you can continue to start SNAP from a terminal with Anaconda activated, or create a new Desktop Launcher by combining the one from SNAP with the example from: Desktop Launchers using Anaconda Python, but make sure you understand what the commands are doing.

I tried this command

even icor is not run

gdal-config is from the basic GDAL programs package, which is generally separate from the the python “module” in linux distros. Since you appear to be using Anaconda, you should install the gdal library using a conda package (mamba is usually faster than canda). Anaconda’s GDAL package may install different versions of the GDAL programs along with the Python module.

Can I use this method, I tried but not run … 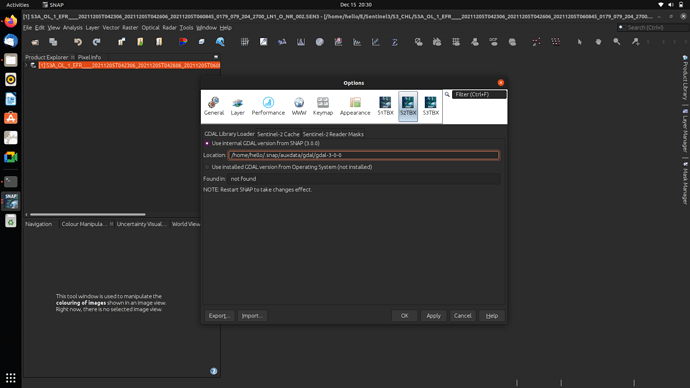 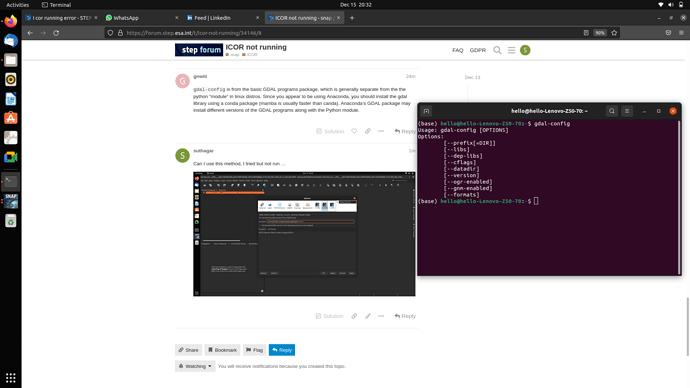 I don’t think the GDAL package from SNAP includes the Python module for your Anaconda Python. Like jpy, the Python gdal module has to be compiled for each platform and Python version. Unlike jpy, for most Python packages the gdal module is available from the same source (e.g., linux distro package or Anaconda).

I changed that , also i try to install but it gdal already available ?please see this terminal 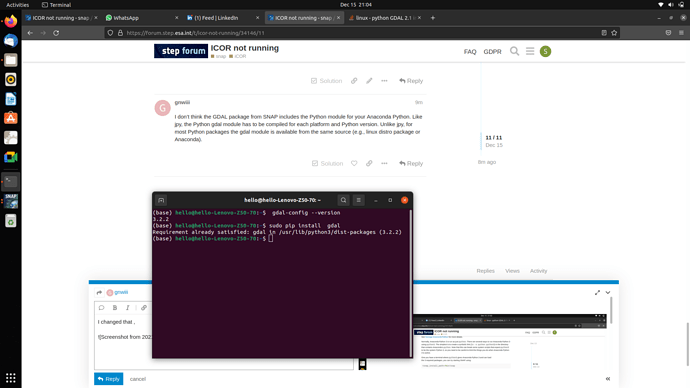 It would be easier to reply if you would just paste the text from the terminal into your post. Using
sudo pip install gdal will install the gdal Python module for your linux distribution’s package, but your previous post showed you using Anaconda Python. To install modules for Anacanda Python you need to use one of Anaconda’s package installers (conda or mamba) in an Anaconda environment (your post showed you using the “base” environment.

I don’t know anyone who doesn’t run into problems Python environments – see: xkcd on Python Environments

But gdal in conda environment ? If avail why not run,
why my SNAP is not detect gdal? 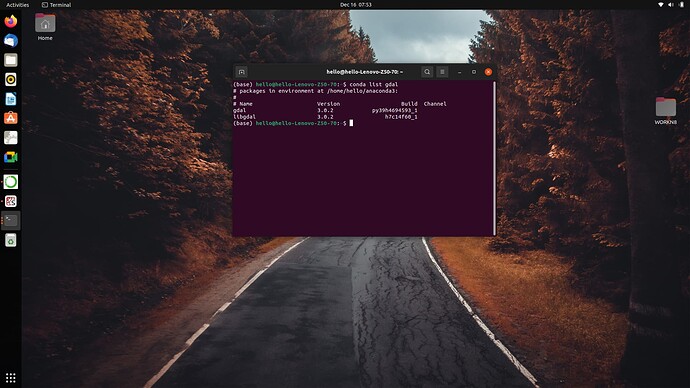 Or its possible to clear this issue by uninstalling SNAP, Anaconda and reinstall one by one ?

Is there a reason you need Anaconda Python, or can you use linux distro packages?

Thanks for your time ,When i enter python or python3 in terminal it show version 3 and 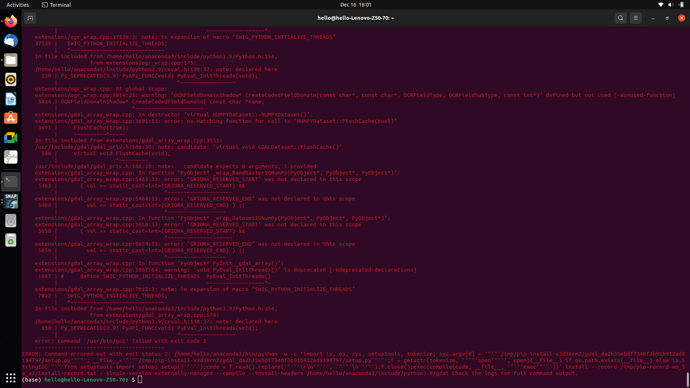 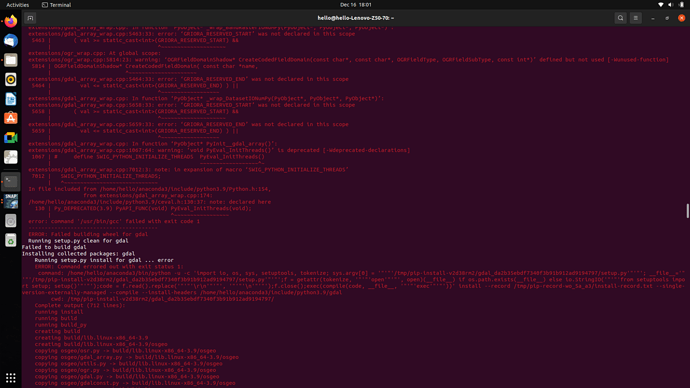 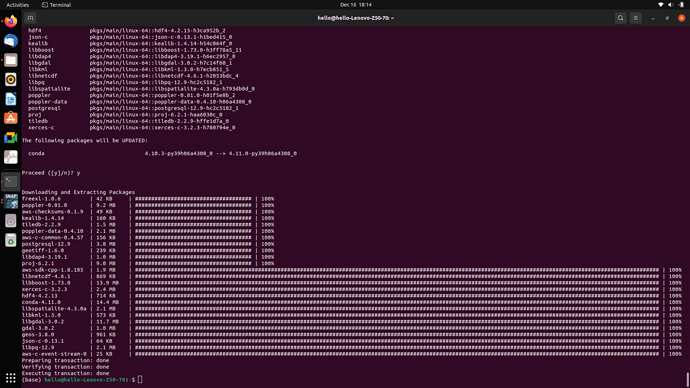 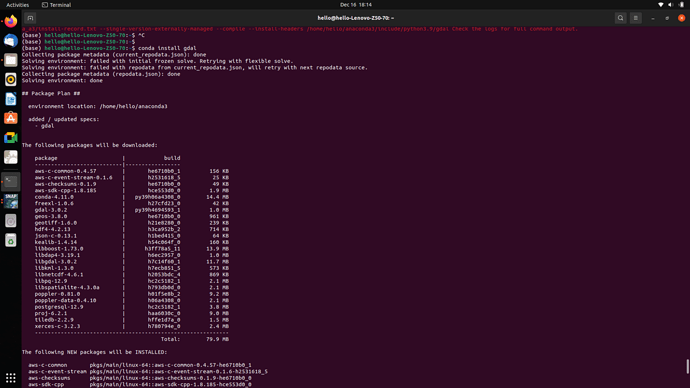 There is more to getting a working configuration – your python and python3 may have different “minor” versions and could been built using different compiler and runtime library versions. You should avoid using distro versions of python and pip in an Anaconda environment.

Your first screen capture has “deprecated” messages errors that may indicate some mixture of versions of the various components (compilers, libraries, and python).

You appear to be using two different python programs (e.g., python3 from your linux distro and python from some other source. Using screen snapshots does not provide a complete picture, and they are almost unreadable on my laptop screen.

Please run type -a python python3 pip pip3 and then for each of these programs that are found, <full_path_of_program> --version and paste the text into a post as a “code” fragment using the </> format. This will help us understand which versions you are using.

You seem to be using pip. This should not be necessary, as both the linux distro and Anaconda should provide Python GDAL modules. Installing with other tools and may confuse things to point that it will not be possible for us to figure out a way to run ICOR from a distance.

Thank you dear gnwiii ,I tried your command

I further tried command as you suggested Output is below

General Options:
-h, --help Show help.
–isolated Run pip in an isolated mode, ignoring
environment variables and user configuration.
-v, --verbose Give more output. Option is additive, and can be
used up to 3 times.
-V, --version Show version and exit.
-q, --quiet Give less output. Option is additive, and can be
used up to 3 times (corresponding to WARNING,
ERROR, and CRITICAL logging levels).
–log Path to a verbose appending log.
–no-input Disable prompting for input.
–proxy Specify a proxy in the form
[user:passwd@]proxy.server:port.
–retries Maximum number of retries each connection should
attempt (default 5 times).
–timeout Set the socket timeout (default 15 seconds).
–exists-action Default action when a path already exists:
(s)witch, (i)gnore, (w)ipe, (b)ackup, (a)bort.
–trusted-host Mark this host or host:port pair as trusted,
even though it does not have valid or any HTTPS.
–cert Path to PEM-encoded CA certificate bundle. If
provided, overrides the default. See ‘SSL
Certificate Verification’ in pip documentation
for more information.
–client-cert Path to SSL client certificate, a single file
containing the private key and the certificate
in PEM format.
–cache-dir Store the cache data in .
–no-cache-dir Disable the cache.
–disable-pip-version-check
Don’t periodically check PyPI to determine
whether a new version of pip is available for
download. Implied with --no-index.
–no-color Suppress colored output.
–no-python-version-warning
Silence deprecation warnings for upcoming
unsupported Pythons.
–use-feature Enable new functionality, that may be backward
incompatible.
–use-deprecated Enable deprecated functionality, that will be
removed in the future.

no such option: -m

I also checked with this command 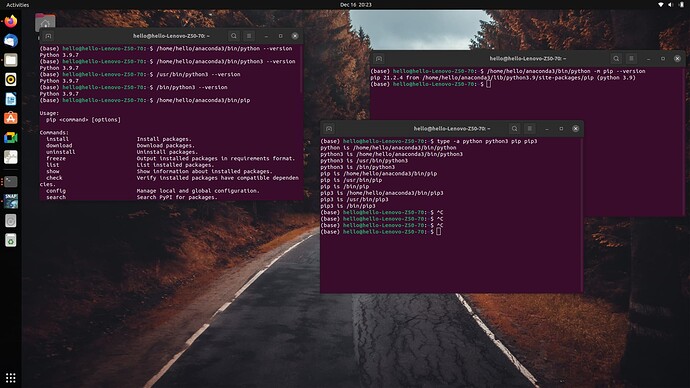 You could try editing sentinel2.py to replace import gdal with the try-except block.

[I notice a bunch of <Control-C> `^C` entries – if you were trying copy text you need to use <ShiftControl-C> to copy text from the terminal.]