when i want to do PCA, there is an error, help me @ABraun

I don’t know where this band could come from. You can try saving the product in another file and run the PCA again.

B2.raw is apparently used in some expression. The ‘.raw’ refers to the raw unscaled value of B2. It seems you don’t have a B2 band but somewhere it is expected. But I can’t say why.

@ABraun it doesn’t work, so what must i do now? its stuck
@marpet hmmm okay, thanks for your answer marco, Do you have another solution?
anyway, is it possible if i want to build DSM using S1 SLC product?

Did you apply sen2cor on your Sentinel-2 product? Maybe this caused the ‘.raw’ file.

anyway, is it possible if i want to build DSM using S1 SLC product?

technically, no. Interferometry always requires two products. But also with an image pair you won’t get a proper DSM out of S1 because c-band is too sensitive towards changes over vegetation, for example. It worked in some cases, as you can see here:

I want to coregister Sentinel-1A imagery and Sentinel-2A imagery. i have taken subsets of both the images.

On Sentinel-1A, I have performed calibrtaion, multilooking, speckle correction and terrain correction.

When I am trying to coregister both the images, following error is being shown: 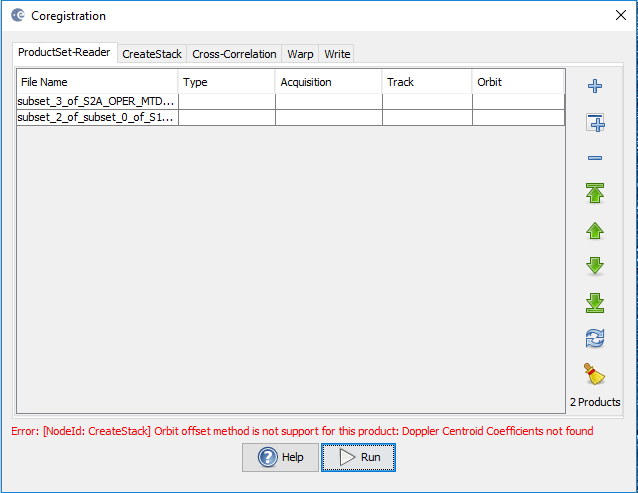 This is the initial offset selection in the CreateStack. There isn’t orbit information in the Sentinel-2 product so you’ll need to use Geolocation.
Follow the advice above by @mengdahl and terrain correct the SAR and use the same map projection with the optical then just use CreateStack with Geolocation for the initial offset and bilinear resampling.

After the collocation process what should be done to fuse the images.

There are several approaches - depends on your application.
If you want to classifiy the image based on both S1 and S2, you can directly digitize training areas on the stack. The Random Forest classifier, for example, then uses information of both sensors.
If you really want to merge the images you can apply a PCA which generates new layers based on information of both sensors.
There are also various other fusion techniques, feel free to research and compare them.

Actually i will be fuse S1 and S2 and RF classification will be used in SNAP. I am little bit confuse that after collocation process the PCA should be used or something else? Please clarify me plzzzz.

Come on… How can I know what you are aiming at? We are just trying to help, but there are so many fusion techniques, there is no standard procedure and there are many things which have to be considered. So how can we advise you if you obviously don’t know what you want yourself.

If you want sound advice, give a bit more information by yourself. What is your data, what do you want to do with it, which method did you chose…
Just heading from one step to the next makes it so difficult for us to understand what is going on at your side.

In this case you can simply train your samples on the stack which contains both S1 and S2 data and then apply the Random Forest classifier.
You will find descriptions here:

Which level/order of accuracy can we expect in terms of pixel alignment?
From my understanding, it should be sub-pixel order. Any comments on that?

hello ABraun, I was wondering if it is important to prepeocess the sentinel-2 data because I tried classifying it and the result wasn’t good…in fact it didn’t work.
I don’t know whether it is because I didn’t preprocess it or maybe I might have left something out but I followed this your discussion with dini_ramanda and did exactly as he/she did.

hello dini_ramanda. how did you go about your classification of the sentinel-2 dataset. I am getting something strange but the sentinel-1 works perfect

Radiometric correction only slightly changes the pixel values, it is not mandatory for classification (unless you want to compare scenes of different dates).
But there were cases where classification only worked after reprojection.

I reproject the data into Geographic Lat/Lon. After that, the values do not change. I try some times with some different data and I find out that in the classification step, it works with the Lat/Lon project.